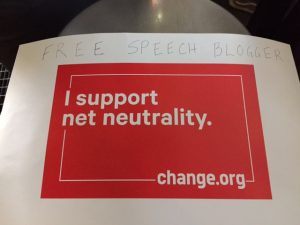 Thursday December 7 saw nationwide rallies to protest Federal Communications Commission director Ajit Pai’s promise to end Net Neutrality at the FCC’s monthly meeting on December 14. Most of the rallies, like the one in New York City that I attended along with more than 1,000 other people, took place in front of Verizon offices and stores because, before becoming head of the FCC, Pai worked as a lobbyist for Verizon. 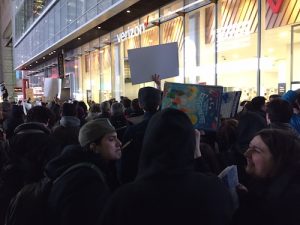 The people I talked to at the New York City rally understood that the FCC would make its decision on behalf of the handful of Internet Service Providers regardless of what we think. And perhaps expecting favors in return for their silence, our former free speech corporate allies — Apple, Alphabet/Google, Netflix, and Facebook — have been noticeably quiet this round. As large players, they can afford to pay for fast lanes and pass the cost to the consumer, and the restriction of access to the “last mile” of broadband will give them advantages over potential new competitors. All of this is a lesson that corporations have no commitment to any principle beyond the almighty dollar — including democracy and freedom of expression. (And if you want additional proof, check out this powerful piece about Facebook’s collaboration with the murderous Duterte regime in the Philippines.) 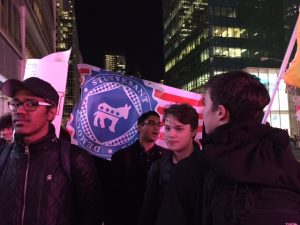 But there were signs of hope, most notably in the presence of a sizeable contingent of protestors from Stuyvesant High School. They included members of the Stuyvesant Democrats, techies, gamers, and friends of free speech. Like Brooklyn Technical High School, where I taught social studies and English before moving to Wisconsin (and chaperoned a group to the huge disarmament rally in Central Park in 1982), Stuyvesant is an academic-specialized high school, with graduates going on to top colleges. It is also a diverse school, as one can see from the pictures of students carrying the banner and waving their “Don’t Tread on Me” flag. The Gadsden Flag, as it’s also known, was once a symbol of the Tea Party and has now been picked up by the more libertarian elements of the Resistance. 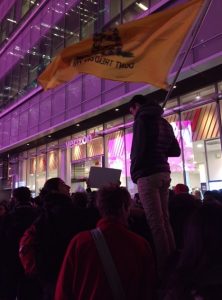 I talked to some of the students who were there. Their concerns ranged from sites being blocked on free speech grounds to the impact of corporate control of the internet on innovation. They will miss access to their favorite music, movies, and games if these services are priced out of their reach. They also expressed concern that ISPs, operating as monopolies or in collusion, will not increase and improve their capacity because they can make more money charging higher prices for the inadequate, poorly maintained internet capacity they have now.

Seeing and speaking to these young people who have stood up for a free and open internet as fundamental to a democratic, free market society made me think of the teenage characters in my historical work-in-progress. Like these high school students from diverse backgrounds who’ve lived half their lives with an African-American president only to see his liberal-democratic administration succeeded by an authoritarian white nationalist regime, the teens in my novel had a taste of freedom before a crackdown took it all away. Bit by bit, the music they listened to, the books they read, disappeared from stores and became contraband. In the thoughts of 17-year-old Lida, one of my main characters,

How easily you could take away freedom and everything that went along with it. Perhaps if they’d experienced freedom for more than eight months, gotten accustomed to living with it every day for years, they would have fought harder to keep it. 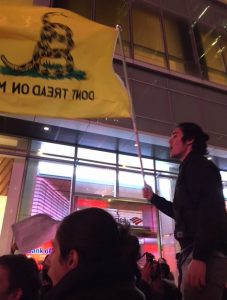 Lida imagines that people who’ve grown up with the freedom that she and her friends never enjoyed would understand its value and choose not to live without it. Certainly the Stuyvesant students are fighting for theirs, but it remains to be seen how hard people will fight — or if having freedom for generations have led us to take it for granted. I hope that it doesn’t take losing our freedom on the internet to convince most people — albeit too late — that this is something worth fighting for.