I’ve been sitting on other news besides publishing news for many months now. At the beginning of December, my husband and I had dinner with our son, Derrick, and Lindsey, who he married in April 2018. After we brought over the dessert, they announced, “We’re going to have a baby!” 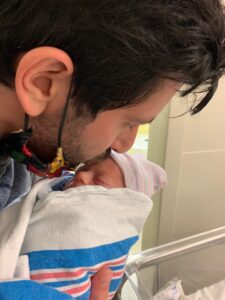 At the end of the month, they invited us to dinner again, and joining us were Lindsey’s parents. who already have one grandchild and were looking forward to one more to keep her company. There, she and Derrick showed us their first sonogram and pointed out the two spots of growing cells. They were going to have twins! Over the next month, they learned that these would be identical twins, which happens in 1 in 250 pregnancies. Fraternal twins, which come from two separate fertilized eggs, run in families. Identical twins, where a single fertilized egg separates, occur at random. Fraternal twins can be two girls, two boys, or one of each. Identical twins are, by definition, two of the same gender. The surprised parents-to-be asked the doctors not to tell them whether they would have girls or boys. They wanted more surprises later.

Lindsay’s pregnancy turned out to be fairly uneventful despite the extra person. She is quite the trooper, and the pandemic, which forced everyone in her office to work from home from mid-March onward, allowed her to get more rest than she would have gotten had she commuted to work in normal times. She and the doctors scheduled the delivery for July 24, and on that morning yesterday, little Jonah and Reed, formerly known as Baby A and Baby B, were pulled from their crowded home of 37 weeks. Jonah weighed just over 7 pounds. He was nearer to the food. Reed, pushed farther away, weighed 5 pounds, 7 ounces. He’s now getting extra food to catch up. 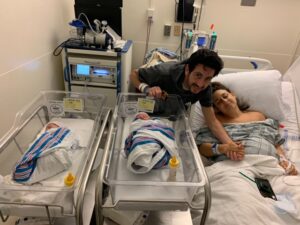 The family on the first day. Photo by Lori Steck.

While the twins will be more similar to each other than to anyone else on the planet, they will still have their own personalities based on their experiences and their relationships with each other and the rest of their environment. While waiting for their babies — Richard and my first grandchildren — we told Derrick and Lindsey about famous sets of identical twins. New York Congressperson Jerrold Nadler, a liberal Democrat and at one time my brother-in-law’s boss, had an identical twin who was a conservative Republican. Identical twins Alexander and Yevgeny (Eugene) Vindman were in the news when Lt. Colonel Alexander Vindman testified against the president in the impeachment hearings, and both brothers felt the sting of retaliation. (Alexander has since resigned from the military due to continued harassment.) In researching MOONWALKING, a historical novel in which my protagonist is of Polish heritage, I discovered that the country’s former president and former (and current) prime minister, Lech and Jarosław Kaczyński, were identical twins who at the age of 13 acted as misbehaving twins Jacek and Placek in the children’s movie The Two Who Stole the Moon. 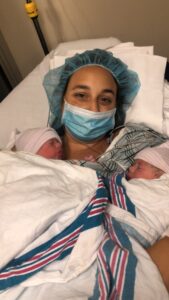 Closer to home are astronauts Mark and Scott Kelly. Mark is now running for a Senate seat in Arizona and Scott spent a year on the International Space Station as scientists assessed the impact of space travel on DNA. And fans of Varian Johnson’s YA and middle grade fiction may be surprised to hear that he has an identical twin named Darian, who works in engineering and technology, as Varian did before he became a successful author. Or maybe people won’t be surprised, because Varian’s latest book is the first in a fun middle grade series called Twins. 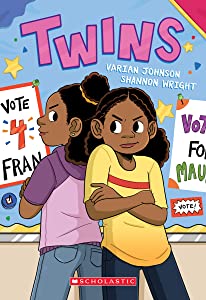 My husband has a friend who’s the father of identical girl twins, and he offered advice. Fortunately, Derrick and Lindsey live five blocks from us, and now that my ankle has healed, I can walk over to his place to help with the babies. The other set of grandparents live 11 blocks away, so the new parents will have plenty of assistance as they start off with their new, expanded family. As a writer of children’s books, I appreciate the fact that they’ve brought me (and all my colleagues) a pair of new customers, and they’re keeping the teaching profession going for my husband and daughter. We welcome Jonah and Reed to the world and look forward to seeing them grow up!