The “We Are Here to Stay” Launch and Panel

The shocking victory of a white nationalist President and his political party in November 2016 led me to wonder about the fate of the many diverse books making their way toward publication, particularly those with themes related to Black Lives Matter, immigrant rights, and by and about LGBTQ+ people. In fact, I know of only one book that was cancelled or postponed as a result of the election, acclaimed nonfiction author Susan Kuklin’s OUT OF THE SHADOWS: VOICES OF UNDOCUMENTED YOUNG ADULTS. In consultation with the nine young people she interviewed, she decided to pull the book and rethink its presentation. Two years later, the same interviews have come out from the same publisher, Candlewick, in a volume titled We Are Here to Stay: Voices of Undocumented Young Adults. What’s different is that many of the interviewees have been forced back into the shadows, which means their full names and photographs have not been used. And when four of the courageous young adults, all of them now in their twenties, participated on a panel with Kuklin and immigration lawyer Mary Ellen Fullerton, at Greenlight Bookstore in Brooklyn last week, I decided not to use their first names or their pictures, as I don’t want to do ICE’s work for them unwittingly. I know what it’s like to live in a police state. 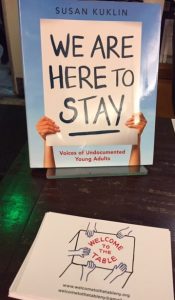 Co-sponsors of the event were Candlewick, publisher of the book, and the organization We Are Here to Stay.

In all, more than 80 people attended the event, which began with an introduction to co-sponsor Welcome to the Table, an organization that raises money for DACA (Deferred Action for Childhood Arrivals, the program that began under the Obama Administration in 2012 and that the current administration has moved to cancel) applications, work permits, green cards, and citizenship applications. The young people on the panel were beneficiaries of earlier initiatives as well as  the DACA program. D, a young man from Colombia, described how his work permit to become a lifeguard funded his college education, as his immigration status made him ineligible for financial aid. Both his twin sister, S, and his older sister, Y, were able to travel to Colombia because of the advanced parole they received through DACA. Y taught school in both Colombia and New York City and published poetry that she wrote in the months she spent in the place that was her home until she was nine years old. S talked about her affinity with the people of Colombia, something that surprised her because at the age of six, she was shot in the crossfire of a gang war, and it was the event that drove her family to decide to come to the United States. 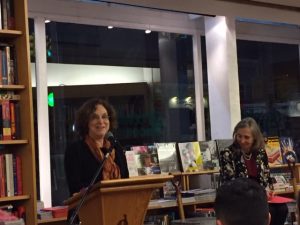 Kuklin, Fullerton, and the panelists highlighted the contributions the young immigrants have made to their new country. At the age of 13, P, from Mexico, walked through the desert with her 18-year-old sister because she’d had to drop out of school and now wanted to finish her education. She’d been told that the trip would take 45 minutes. It took four days. The migrants were robbed along the way and left for dead. When she arrived in New York City, where her parents and aunt and uncle lived, she had to wait until she was almost 15 before starting school, and when she did, she was several years behind. To help out, she worked for her uncle’s construction company, where she developed her love of engineering and technology. Since then, she has studied at MIT and invented a system of sensors for canes used by blind people. Today, she teaches high school science and technology and works on her inventions. Had she not come to the U.S. and been able to stay (she currently has her green card), the country would not have the benefits of her teaching and her inventions. 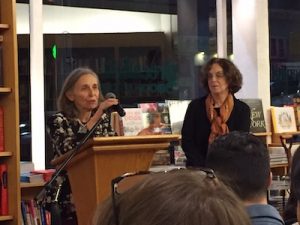 Immigration lawyer Mary Ellen Fullerton talks about DACA and the court cases related to it.

The other three panelists have all obtained work permits as well. Y is a published author and studying for her MFA. S is a trainer for a nonprofit in Chicago, and her twin brother still works as a lifeguard while finishing his degree in business so he can get a job with an international corporation.

The four panelists talked about what it means to them to be immigrants to the United States. P is grateful for the opportunities she’s been given. Her Mexican community was closed-minded and very religious. Girls were expected to drop out of school, marry, have babies, work at unskilled service jobs, and attend Mass regularly. While D missed his friends in Colombia, he quickly made new friends among the diverse immigrants in his ESL classes and now has a large social circle in New York. Unlike his sisters, he hasn’t been back to Colombia. S and Y appreciate both worlds and welcome the tension between the two that gives them the ability to observe and reflect. As Y put it at the end of the panel, “It’s good not to be too attached to labels.”

Along with these four who grew up in New York City, We Are Here to Stay features young people from Arizona, some of whom faced even bigger hurdles, including, in one case, a victim of human trafficking. All of them show the diversity of the immigrant experience, the resilience of people who faced, and continue to face, great challenges to be here, and what they bring to a society that would be poorer in so many ways without them.