The Cord Is Still Cut!

Nearly two months ago, I cancelled my cable TV service as a result of Time Warner’s merger with Spectrum and their decision to raise basic cable prices and move my favorite channel, HGTV, to the premium level. I attempted to negotiate — I’d read that the cable companies will give subscribers a better deal if they ask for one and/or threaten to cancel — but they would not budge from the overall $60 per month increase that keeping HGTV would require. In fact, when I threatened to cancel, they quoted a package that would cost me $100 a month more! Yes, it would include HBO, but I don’t watch HBO and don’t see how HBO is worth another $40 per month over their already ridiculous prices anyway. So I cancelled the cable, returned the box, and have been living without ever since. 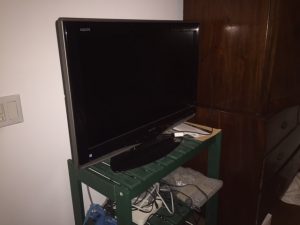 Aside from two excellent full-length documentaries I watched on Netflix — The 13th, about race and the criminal justice system, and What Happened Miss Simone?, an overview of the life and work of singer/songwriter Nina Simone — my TV has been gathering dust in the bedroom. On the other hand, I’ve been going out more, seeing friends and attending panels and other live events. I’ve also read more newspapers online, including The Guardian, based in the UK and a key source of international perspectives on US politics.

Big Media’s shameful reporting of the recent elections — for instance, all the free publicity it gave to the Trump campaign, which spent so little on television advertising because, why would you pay for something when the various networks gave it to you for free? — has encouraged my resolve to cut the cord. Given Big Media’s kowtowing to those in power, which led the country into an eight-year war in Iraq over fictional weapons of mass destruction during the George W. Bush administration, I have little faith that the broadcast networks will challenge the new administration’s policies or scapegoating of enemies, external or internal. The newspapers generally did a better job of reporting the election, and I hope they will continue to be a source of serious investigative reporting and critical commentary. Hubby and I have devoted some of our cord-cutting savings to online newspaper subscriptions.  Given a choice, we refuse to pay for exposure to propaganda. We prefer supporting more in-depth sources of information and knowing that our money and viewership will not be going to Fox, CNN, NBC (where the incoming President has signed an agreement to continue as executive producer of Celebrity Apprentice), and the like.

Ultimately, we have to vote with our dollars. Our dollars count, now even more than our votes. When I cancelled the cable, I pledged to buy books from smaller publishers, as well as ones with diverse and international perspectives. Nearly two months later, I’m showing off three books that I bought at various events I attended: 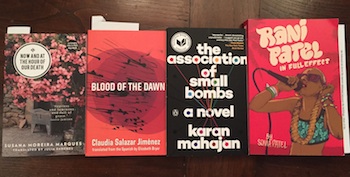 My new books, with pages of my work-in-progress sticking out of Rani Patel in Full Effect.

I also read and reviewed (review copy sent by the publisher) Sonia Patel’s Rani Patel in Full Effect, for The Pirate Tree, one of the nominees for the William Morris Award for debut YA fiction. The novel explores the isolation of a Gujarati family from India living on Moloka’i Island in Hawaii in 1991 and aspiring rapper Rani’s affair with a much older man, which repeats the pattern of sexual abuse started by her father. In its depiction of a repressive patriarchal situation and a teenage girl’s efforts to fight back, recover, and move forward, this novel has much to say to our young women today.

Turning off the TV and reading more isn’t just a way of saving money; now and in the coming months, it’s an act of resistance too.