Categories Menu
Home » Blog » Selling My DJ Equipment: The End of an Era

Selling My DJ Equipment: The End of an Era

Last month I sold my mobile DJ equipment to Sean McLaughlin, another WRPI show host with whom I’d DJ’ed a number of weddings and other celebrations. Ever since I began spending more time in New York City and Portugal, our work together had dwindled to zero — though he did borrow my equipment from time to time. Because of my move to NYC sometime in the next year, I needed to pare down my possessions, and it didn’t seem likely that I’d get work in the city with no car and the surplus of DJs more qualified than I am. In any case, I would have to work with a partner, since a lot of mobile DJ’ing is being personable and handling requests on the fly, neither of which play to my strengths. With Sean, I usually handled all the technical stuff and he did the talking. 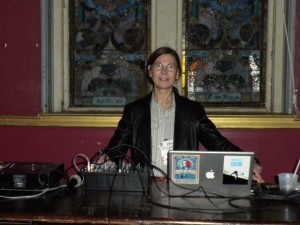 In January 2010, I DJ’ed a REFORMA fundraiser at the ALA Midwinter meeting in Boston.

Selling my equipment made me think of all the fun times I had at parties, keeping the music and the mood going. I originally bought the speakers, mixer, and CD players in December 2008, after using other equipment to play a world-music mix for a fundraiser of the Ethnic and Multicultural Information Exchange Round Table at the American Library Association’s Midwinter meeting in Philadelphia in January 2008. Apparently, I did a good enough job for REFORMA, the Association of Library Services to Latinos and the Spanish-Speaking, to ask me to DJ several of their fundraisers over the years. (I was somewhat restricted by ALA locations that I could reach in one day by car.) For the five semesters of VCFA residencies, I provided the sound engineering, and then the music mix, along with my fellow students Rob Costello (pictured on the banner, in a photo taken by our classmate Shelby Hogan) and Steve Bramucci. The party that Steve and I DJ’ed in my final semester turned into a wedding celebration for another of my classmates, Miriam McNamara, and girlfriend Alison Murphy, who journeyed from their North Carolina home to see Miriam graduate and to get married in Vermont. 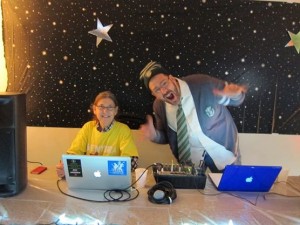 Classmate Rob Costello and I DJ’ing the party at the winter 2012 VCFA residency. Photo by Shelby Hogan.

Being at the VCFA residency as a graduate assistant and not as a party DJ was quite disorienting, as I didn’t have anything to do. I’m a terrible dancer and uncomfortable among reveling crowds, and I thought of all the music I’ve heard recently that would have been perfect for this party. Nonetheless, I dressed up in costume as a children’s book character — in my case, Tom Sawyer, complete with a blade of grass between the teeth — and had a good time. And at least until I move to New York City, I will still have my regular world music show on WRPI, which most recently featured music from the countries of the 16 teams that made the second round of the World Cup and a few countries that didn’t but that have good music. 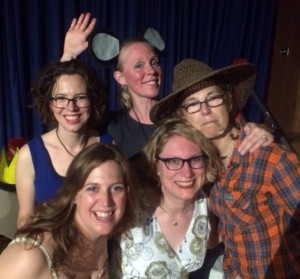 With my fellow grad assistants at the summer 2014 VCFA residency.

So while this may be the end of an era for me — the end of a hobby I enjoyed that also happened to bring in some money — I’m keeping up with the music and, depending on where I live years from now, may return to mobile DJ’ing again. After all, I once gave up writing fiction and ten years later, picked it up again.