My friend Sharon Levin of the Life, Literature, Laughter blog told me about a benefit signing for the Comic Book Legal Defense Fund (CBLDF), taking place at both Comic Arts Brooklyn and the Society of Illustrators in New York City. Unfortunately, she lives in Northern California and could not attend. Fortunately, I was going to be in New York City and could attend the free show at Comic Arts Brooklyn on Saturday, November 9.

Still, I debated going until the last minute. On the one hand, I wanted to provide a service to the kidlit community and gain a valuable perspective for my work as a member of the Cybils graphic novel panel this year. On the other, I would be doing a lot of walking on my still-injured knee. 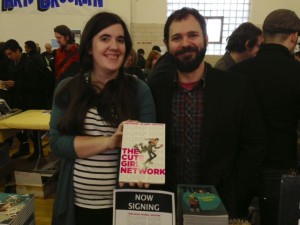 MK Reed and Joe Flood with their new book to be released on Tuesday. Good luck, MK and Joe!

I’m glad I went. Without injuring my knee further, I met artists, writers, publishers, publicists, and activists for this increasingly popular genre. Many of the publishers have released graphic novels for children and teens, and I found dozens of titles that are on my Cybils reading list. Publishing heavyweight First Second, a division of Macmillan, had many familiar titles, but the best part of dropping by their table was meeting MK Reed and Joe Flood, whose debut collaboration (though both have published other works separately) The Cute Girl Network officially comes out on Tuesday. I enjoyed sharing their excitement and know that The Cute Girl Network, a soon-to-be middle school favorite, will be on our Cybils list next year. (The cutoff is October 15, so it missed this year’s deadline.) 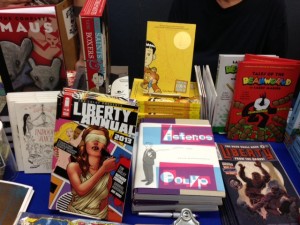 The CBLDF sold a selection of bestselling graphic novels and limited-edition prints to support its efforts against censorship.

My reason for coming was to report on the efforts of the CBLDF, which defends individual artists whose work has been denounced as subversive or pornographic, and to stop the banning of comics and graphic novels in libraries. Much of the organization’s work is educational, to raise awareness of the value of comics for readers young and old and to defend the First Amendment rights of writers, artists, and readers. The CBLDF’s materials, appropriately presented in comic-book form, present the history of censorship of this popular culture form that always seems to bear the brunt of disapproval. Many notable artists donated work and time in support of the CBLDF, including Paul Pope, whose Battling Boy is on my Cybils reading list, and Jeff Smith, the creator of the acclaimed and groundbreaking Bone series. 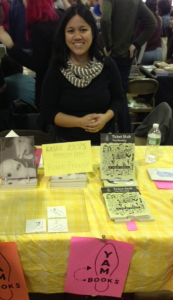 As with publishing in general (and most other industries), the little guys fight for their place. I appreciated seeing the scrappy, quirky small presses, some selling a handful of titles and others offering a larger selection. Yam Books was selling Tim Hensley’s retro-looking commentary on the life of a movie closed-captioner, Ticket Stub, which attracted me because of the tag line “You’re Fired.” (Of course, someone in who may be attracted to the book for that reason may also not have the money to buy it.) Two tables down, Leslie Stein was covering for her Seattle-based publisher Fantagraphics and showing off her series for adult readers Eye of the Majestic Creature. She expressed interest in writing for young adults, and we talked about some of the differences between the two markets for graphic novels. 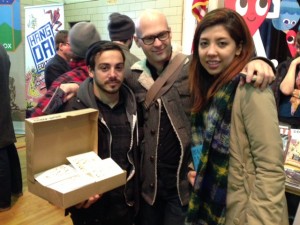 In a genre of “outsiders,” Alessandro Echevarria (left) was the ultimate outsider — one with no publisher and no table.

Among the tables and the crowds, I noticed a young man with a copy-shop box, handing out free copies of his comic, “Sadface Place, Volume 0.” He sold a version on pricier card stock for $3. In a genre of “outsiders,” he was the ultimate outsider — one with no publisher and no table. In him, I saw myself as a once self-published writer, selling my mass-market-size YA paperback out of my backpack, or later on, published by a dying small press, selling Gringolandia at fairs, out of the trunk of my car, and, yes, again out of my backpack. When I signed with a major publisher, I thought, “Finally I’ll get my chance to have my book sold indoors!” That said, writing careers are precarious, and any of us can find ourselves back on the outside, peddling our wares ourselves if we dare. So even though I don’t have a lot of money to spend these days, I paid  Alessandro Echevarria $3 for the card-stock version of “Sadface Place,” a nearly-wordless collection of profiles of human and non-human residents of a fantastical Brooklyn-like neighborhood. (The verdict: Promising art with effective use of details; I can definitely see compelling characters and stories emerging in future volumes and hope that they will.) 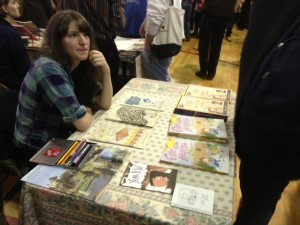 Leslie Stein brought her colored pencils, tools of the trade.

Clearly, graphic novels have found their place in the sun — or, in my mind, “indoors.” Still, we need folks like the CBLDF to defend the free speech rights of all comic book and graphic novel creators. Furthermore, in the push toward greater acceptance and commercialization of the graphic novel form, we need to seek out and recognize those rebels whose work may be as-yet undeveloped but fresh, or whose unique vision remains on the margins. 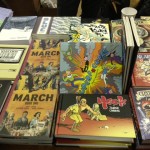 Top Shelf Productions is one of the larger publishers of graphic novels, with the bestselling March Book One as one of their releases. 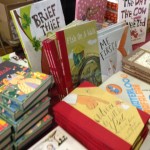 Enchanted Lion is a major publisher of graphic novels for young people that draw on cultures around the world. 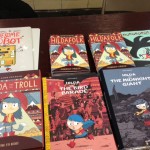