Putting Their Heads Together 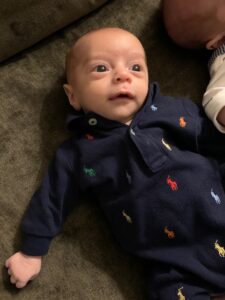 The twins are closing in on their first two months and growing quickly. A couple of weeks ago, Jonah gave us his first smile, and Reed followed soon after. As the pictures show, Jonah continues to outpace Reed, whose greater level of activity cancels out his efforts to catch up to his “big” brother. (Jonah is, in fact, two minutes older than Reed.)

Do they recognize each other? At this point, probably not. Babies’ first developmental task is to recognize themselves and their own bodies. They learn this intuitively by touching their skin and feeling the pressure on their fingers and the place they touch. If Jonah and Reed touch each other, they learn something different and will in a few month come to realize there’s a second baby in their vicinity. This process can take a year or two. One of our friend Roberto’s identical twins looked in the mirror for the first time and identified the girl she saw as her sister. 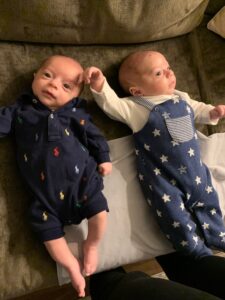 Although they’re getting much better at holding up their heads when placed on their stomachs, Jonah and Reed can’t move around on their own yet. As a result, we put them into adorable poses and take lots of pictures. When they were growing inside Lindsey, they often appeared on the sonogram with their heads together, so a couple of days ago, we put them next to each other on the sofa with their heads touching. Each one gazed in a different direction. It seems for now that Jonah has his eyes on Mom, while Reed focuses on Dad but is also checking out the entire room. I notice that both of them are drawn to the large-screen television. We need to make sure they don’t spend all their time on screens, something that has become a much bigger problem as a result of the Covid-19 lockdowns and so many schools going online only. 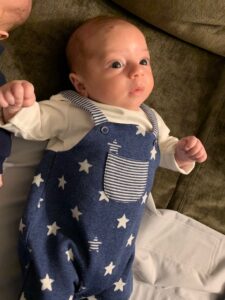 I expect that in future years “putting their heads together” will mean that Jonah and Reed plan acts of mischief together. They will likely become closer to each other than to their parents and other children, at least through their early childhood years. They will never have the experience of being an only child, either in their early years as Derrick was, or in their teens, what Maddy experienced when Derrick left for college. (I will say that the quality of only-child life is generally much higher when one is an infant and toddler than when one is a teenager, when parental attention is far less welcome.) Their closeness in age makes them ideal playmates for each other, as they come to know who they are and who that other person is in the crib next to them. 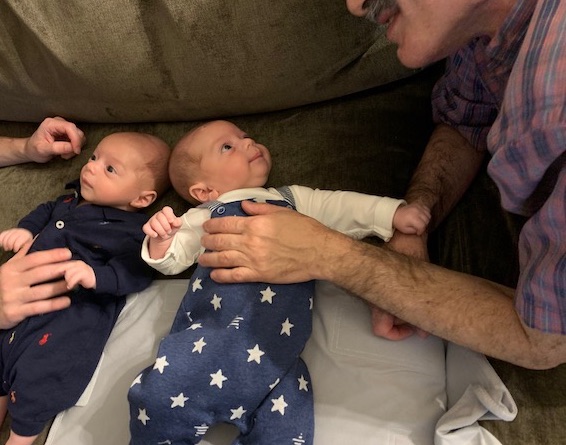 Putting their heads together…