[Revised June 2020 to change Gessen’s pronouns, noting their preference to use they/them/their/theirs.]

The last day of the PEN World Voices Festival usually ends with panels and presentations by well-known public figures, and this year was no exception. Along with closing speeches by Chimamanda Ngozi Adichie and Hillary Rodham Clinton, festival coordinator Chip Rawley moderated the “It Can’t Happen Here” panel at Subculture with noted political analysts and award-winning writers Max Boot, Ian Buruma, and Masha Gessen.

I’d just finished reading Gessen’s National Book Award winning The Future Is History: How Totalitarianism Reclaimed Russia. The book gave me nightmares. It’s the often heartbreaking story of six people and their families as they lived through the final decade of the Soviet Union and the almost three decades afterward, seeing the promise of freedom disintegrate into a reality almost as terrifying as the years of the purges. I was trying to identify what made the book so upsetting to me. Was it seeing the suffering of people with whom I shared, however distantly, family ties? Was it the sense of helplessness ordinary people felt as their options diminished and they found themselves once again living in fear? Was it the heartbreak of having the bonds of family and friendship destroyed — of losing those you love the most — at the whim of a despot?

And could it happen here?

Buruma cited the language coming from on high, with “ugly echoes” of past regimes. He warned that institutions aren’t impregnable and can change quickly. We need more people committed to defending them. Boot, a former Republican advisor, agreed. He noted that Trump is more like Mussolini, Chavez, and Erdogan than Hitler — in other words, a common authoritarian. The fact that he has taken power in stable democracy is reason for his limited success. A lot of what hemmed in previous leaders was custom not law, for example releasing tax returns and not interfering with the Justice Department and the FBI. Boot didn’t know how this will end, especially if Trump wins another term. Gessen, like Boot born in the Soviet Union, reminded us that even in an authoritarian state like Russia, it took Putin more than a year to take over the media. They criticized the US media for a “failure of imagination” that led to not taking seriously a Trump win and his subsequent assault on freedom of the press. Buruma cited the availability of guns in the US and especially among the extreme right as a danger many other countries haven’t faced. Boot pointed out that the US has had Trump-like figures before — Huey Long, Joseph McCarthy, and George Wallace — but none became president. 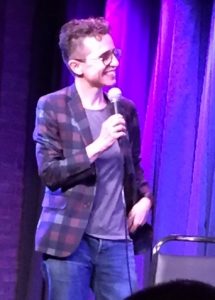 Masha Gessen, author of the National Book Award winner, The Future Is History.

Rawley then asked if there’s a checklist of characteristics of fascism or an authoritarian state, such as rhetoric. Here, Gessen made the distinction between authoritarian and totalitarian, a distinction different from that defined by Ronald Reagan three decades ago. Whereas Reagan called the Communist Bloc “totalitarian” and right-wing dictatorships (mostly supported by the US as a bulwark against Communism) as “authoritarian,” Gessen said that authoritarian regimes dominate a passive, mostly apolitical population while totalitarian regimes mobilize the population to enforce the regime’s ideology or position. They saw totalitarian aspects in the resurgent and highly armed “alt-right.” Boot responded that we’d be in trouble with someone more intelligent and focused. He worries about Trump 2.0. Trump has been a good salesman for autocracy. He wants to be center of attention and is very effective in his pursuit of this agenda. Buruma echoed the point that Trump doesn’t have firm ideology and for that reason he’s not totalitarian. He’s more like a Mafia don. He noted that all three panelists have come from elsewhere — he from the Netherlands. He believed in America and Britain, but today, he said “the knock on the door at midnight is real.” We are already there when many people who live in the US do not feel safe. As a Republican and an adopted American, Boot expressed his profound disillusionment. He always thought the US was immune from losing freedom, but he has no confidence in American exceptionalism anymore.

“Will Donald Trump’s stupidity save us?” Rawley then asked. The panelists shook their heads. Gessen pointed out that simplicity of thought and message is a feature of autocrats. That is how they get their popular appeal. While Communist dictators tended to write books and give speeches with their boring thoughts while right-wing dictators disparaged books, Buruma said, all of them relied on telling lies over and over until the population believed them. Boot said that Trump is the first president to benefit from a right-wing media working hand-in-glove with the State; this is the role Fox, Sinclair, Breitbart, and other outlets play, and due to regulatory favors, they are getting stronger. For instance, Nixon had to work within the parameters of a hostile media. Gessen added that telling obvious lies and getting away with it is the strategy of a bully. It creates hopelessness among those who know the truth but have no way of getting it out and being believed.

Rawley asked if the 2016 election may have been the peak of Trump’s popularity, based on polls since then. Buruma reminded us that no one can assess a dictator’s popularity because the people aren’t free to give their honest opinion. Boot said that Trump’s 40 percent popularity comes from partial media control. Putin has total media control, which leads to his much higher popularity. Gessen questioned Putin as a parallel because he has also annihilated all political opposition. More relevant, they said, is Poland, where authoritarians are rapidly consolidating power despite “well-designed institutions.” The three then addressed whether Putin came in at a time of national humiliation and whether humiliation is a source of Trump’s appeal. Gessen pointed out that things were improving by the time Putin consolidated power, but he convinced people they were not. Boot cited the “existential crisis” faced by Trump’s base — beyond the economic and opioid crisis, it’s a resentment rooted in race. More wealthy white people voted for Trump, and they did so out of racism.

Rawley wondered if our institutions can protect us against autocracy. Here, Boot denounced his former political party for failing to protect. He urged voters to vote in Democrats in the mid-term elections to restore checks and balances. Even before 9/11, he said, the conservative movement had corroded. It had become a bastion of isolationism and racism. Social media and Trump have brought these tendencies out of the sewer, and decent Republicans are drowned out.  Buruma cited Nixon’s “law and order,” a veiled racist attack on the Civil Rights movement as well as the authoritarianism of the megachurches.

So what do we do next?

All three said to “vote the rascals out” in November. After that, Gessen said, we need a vision of a more glorious future, because the lack of vision is what led to the media’s failure in 2016. They called on writers to help create that vision. Here and in the audience questions, Gessen expressed their interest in local experiments: universal health care, cross-border cities, and hyper-local community level structures. 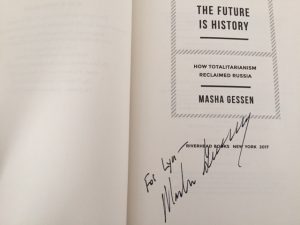 In response to an audience question about impeachment, the three diverged. Boot suggested waiting to see what the special prosecutor finds, while Gessen warned against using “undemocratic means to save democracy.” Another audience question focused on the political opposition. Buruma chastised the Democratic Party for becoming the party of an educated elite. Democrats need to appeal to the working class without going down the isolationist path of Jeremy Corbyn in the UK. Saying that Buruma had already “predicted wrong,” Boot was far less optimistic. The long-term damage to race relations and the US’s standing in the world will take decades to undo. His hope is that the Republican Party goes out of business and new party forms, one that doesn’t exploit racial and ethnic grievances.

Except for voting against Trump’s party in November, the panelists had few solutions, but the full house in attendance appreciated their insights. The problem with living in a turbulent time in history is that we don’t know how it will all end, but with everything we do, we bear the responsibility for this outcome.

You may read my other PEN World Voices Festival reports here and here. Looking forward to next year!