Categories Menu
Home » Blog » Our Fight Is Their Fight

Our Fight Is Their Fight

Having newborn babies in the family has made us think of their future, what kind of world they’ll grow up to live in. Jonah and Reed were conceived during Derrick and Lindsey’s vacation in Japan last fall, which led her parents to make up these adorable candy bar sleeves that read “made in Japan,” but they had no inkling of a deadly pandemic. At this point, anyone who who has chosen to become pregnant during this pandemic, especially in a country like the United States with such a tragically botched response, embodies a stunning level of faith and hope. 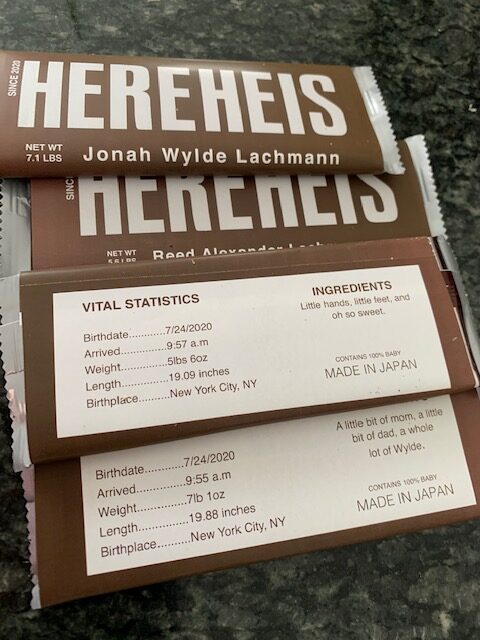 As an author of books for children and teens, I want an audience, but I don’t want our children to grow up in a bleak world with fewer opportunities and choices than my generation or my children’s generation have enjoyed, and I don’t want them terrorized by forces beyond their control. I wrote a novel about teenagers living under a regime of terror, and by the time it comes out two years from now, our young people shouldn’t have to live in similar conditions or be faced with the choices that my characters Stepan, Lida, and Tomáš face.

Our individual decisions and the ones we take collectively will determine the kind of world our newborns will know. Right now, schools are opening in parts of the U.S. where cases of Covid-19 remain high, few people wear masks, and there is no funding from cash-strapped states or a dysfunctional federal government only concerned for their billionaire backers to open safely. Children are falling ill and in several states already, teachers and other school staff have died from the virus. Children, especially in the youngest grades, need to be in school for both social and intellectual development. Along with pressuring our elected representatives to stop ruling over us and start serving us, we need to wear masks and stay out of crowded indoor places to bring the community level of infection down to manageable levels. (We also need adequate testing and tracing, which the federal government has failed to provide, but some states like New York have made a serious effort to pick up the slack.) 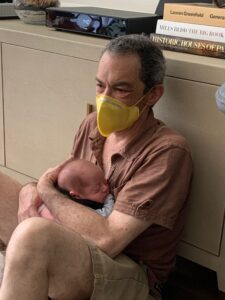 Jonah in his grandfather’s arms.

Some people have argued that perhaps schools should close for the year, as they have in Bolivia. Kids won’t suffer harm if they graduate a year later, these folks say. I’d like to offer some context. In 1976, one-third of adult Bolivians could not read or write, and the literacy rate didn’t reach 90% until the turn of the century. A military coup last year toppled Bolivia’s first indigenous president, who made efforts to end the country’s steep inequality and history of discrimination against non-white Bolivians. Since then, the coup leaders have postponed elections three times and arrested or disappeared thousands of opponents. As in most of the other countries of South America, Covid-19 runs rampant in Bolivia because there’s no safety net, and the mostly-poor citizens of the country must work or starve to death. Without schools open, children will work in fields and urban market stands along with their parents, as they did in past centuries. For many of those children, schools will never be in session again.

No, Bolivia is not a model for anything except more inequality, more repression, and more pandemic.

Another place where our fates are intertwined is Belarus, which recently had an “election,” if you can call it that. After putting his opponents in prison, Alexander Lukashenko claimed victory with 80% of the vote against his nearest rival, Svetlana Tikhanovskaya, the wife of one of the imprisoned opponents. Today, she and her children have fled to neighboring Lithuania after the regime held her for hours for questioning. Ordinary Belarusans have taken to the streets, where police have met them with tear gas, rubber bullets, and arrests by the thousands.

Some have said that their fight is not our fight. But I can’t help but see the similarities between what’s going on in Belarus today, and the hints our own government has given us, both in response to the Black Lives Matter demonstrations following police killings of George Floyd and Breonna Taylor and in the run-up to the November 3 national elections. While Lukashenko, who has ruled Belarus with an iron fist since his first election in 1994 — the country’s last truly free and fair election — is perfectly capable of repressive actions on his own, one can’t help but imagine his reaction to the tear gas, rubber bullets, mass arrests, and unidentified federal agents shoving people into unmarked vehicles in the so-called beacon of democracy. When our president, his Justice Department, and his party in Congress gin up investigations of his opponent, claim the opposing vice-presidential candidate is not a citizen because her parents were non-citizens at the time of her birth (she was born in Oakland, California; case closed), float the idea of postponing the election, and kneecapping the post office that will deliver the ballots, the signs are clear. Autocrats learn from each other. They use the same basic techniques to gain and maintain power. 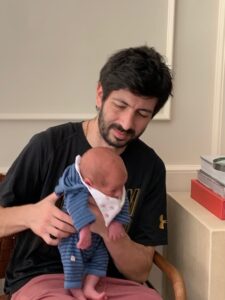 We want Jonah and Reed to have happy, safe, fulfilled lives in the country of their birth. So do the millions of other USAmerican parents who have given birth to or conceived children during this time, and the ones whose children are already on their way to growing up. We need to make sure this pandemic recedes by our own actions. It will allow schools to open and all of us to vote in person safely. We need to make sure this election takes place on November 3 and the side of democracy wins by a wide enough margin that it can’t be contested. This is not the year to stay home or vote third party. The fight of others is our fight, and our fight is their fight.