Categories Menu
Home » Blog » Liu Xiaobo, the Poet Who Would Not Be Quiet

Liu Xiaobo, the Poet Who Would Not Be Quiet

Several weeks ago, I had the pleasure of reviewing a new children’s book, Carmen Agra Deedy’s The Rooster Who Would Not Be Quiet!, illustrated by Eugene Yelchin and published by Scholastic Press. In this story, both whimsical and potent, the people of La Paz elect their dictatorial mayor after firing his predecessor for allowing the village to become too noisy. (After all, La Paz in Spanish means “peace.”) The new mayor promises to reduce the noise level, but it’s a slippery slope before no noise at all is permitted. Some leave, but most accept the new, quiet reality. Then a rooster arrives with his family. Unaware of the noise prohibition – and not caring – the rooster does what roosters do: crow at all hours of the night and day despite the mayor’s increasingly punitive efforts to stop him. 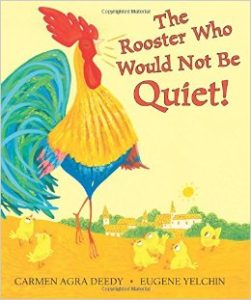 The author and illustrator are themselves no strangers to repression. Deedy was born in Cuba, and Yelchin grew up in the former Soviet Union. His Newbery Honor Book, Breaking Stalin’s Nose, captures what it was like to live during the time of the Purges, where any word or action could be one’s last, and neighbors turned each other in for grudges or favors. For both author and illustrator, coming to the United States meant coming to freedom, having the right to speak and write without fear of reprisal.

Despite being offered the opportunity to emigrate, Chinese poet and dissident Liu Xiaobo chose not to leave and ultimately paid with his life. In his eighth year of an 11-year sentence for his participation in the Charter 08 protest against the regime, Liu died of liver cancer. During this, his final imprisonment (he was also imprisoned for 21 months after the Tienanmen Square protests, having chosen to return to China from the United States to support the students and negotiate safe passage for many of them after the crackdown, and from 1996 to 1999 for demanding freedom for protestors still in prison), he received the Nobel Prize for Peace. He is only the second Nobel laureate for peace to die in state custody, placing China in the same company as Nazi Germany, which bears responsibility for the maltreatment-caused death of Carl von Ossietzky in 1938.

Through PEN America, I have attended events and written letters to call for Liu Xiaobo’s release. Sometimes, these efforts have a happy ending — as in the case of this translator from Turkey — but often they do not. And all too often, the key to a dissident’s survival is emigration to a freer place, which to some extend sidelines them and weakens the message, as Liu himself often pointed out. Carl von Ossietzky had planned to leave Germany after Hitler’s rise but thought he had more time to flee than he did. Liu refused to leave, believing his words had more credibility if he stayed to continue the struggle. 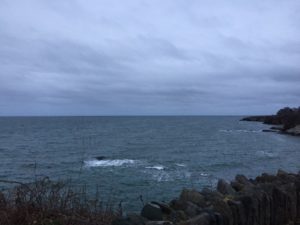 Activists are showing pictures of the ocean to honor Liu Xiaobo, whose ashes were scattered at sea.

According to news reports, Liu’s death has left the Chinese community grieving and demoralized. In the hours that followed, President Donald Trump praised Chinese leader Xi Jinping for his strong and steady leadership, signalling that the U.S. government would not criticize China for its abysmal human rights record. After the Chinese regime refused a burial and instead scattered Liu’s ashes across the ocean, people memorialized the poet and critic by sending photos of the ocean on social media, in this way appropriating a place and a symbol for one man’s fight for freedom.

In The Rooster Who Would Not Be Quiet! the mayor cuts down the noisy bird’s favorite tree, puts him in a cage far from his family, stops feeding him, and throws a blanket over the cage so that it is forever night, but the rooster will not stop crowing:

“And if I have you made into a soup?” the mayor thundered. “I suppose you will still sing if you are DEAD?”

The entire village held its breath waiting for the gallito‘s reply.

“But a song is louder than one noisy little rooster and stronger than one bully of a mayor,” said the gallito. “And it will never die — so long as there is someone to sing it.”

In the end, there are more freedom-loving people than regimes that seek to take away freedom. Today, a few people send photos of the ocean to remember the words and the courage of Liu Xiaobo. Tomorrow there will be more if we pass these words and images on. If we never forget.