As I ponder what to do with three historical novels — one submission-ready, one for which I need to finish another round of revisions, and one still in-progress — I’ve signed up for an accountability mentorship. This group of authors, published but not currently on contract, is designed to keep us moving forward in the absence of deadlines, because it’s so easy to let the day job and family responsibilities take over where there’s no stick poking us and no basket of carrots at the end.

My mentor and I were sharing out current reading list, and she wrote that almost everything she reads today in young adult is indie published, because those are the most interesting and innovative books out there. And her words got me thinking about the sameness of a lot of the traditionally published new books, the preponderance of fantasy when we need more choices in all genres, and the lack especially of YA historical fiction. I met with several editors who encouraged me to write historical fiction for middle grade — which I may do — because the books can be incorporated into the curriculum. However, the nice royalty check I recently received for nine-year-old Gringolandia, and the fact that it aligns neatly with the tenth grade global studies Common Core unit on human rights, belies this disdain for historical fiction written for readers in grades nine and up.

Many high schools incorporate historical fiction written for adult readers into their curriculum. Northwestern University Press is now marketing Gringolandia as adult crossover and for colleges and universities. At least one of my new novels, the own voices novel at the revision stage, is similar in its narrative complexity and portrayal of characters in their late rather than mid-teens. 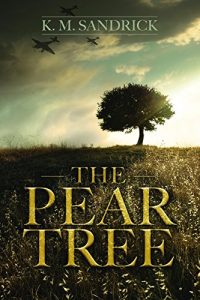 The cover for the digital edition of The Pear Tree.

Last year, as I began to research the market for adult historical fiction, I joined the Historical Novel Society and began to receive the Historical Novel Review, which reviews books published by major houses, small presses, and writers publishing their own books. The last issue I received featured two starred reviews of books that I marked for my to-read list — Connie Hampton Connally’s The Songs We Hide, from Coffeetown Press, and K.M. Sandrick’s self-published The Pear Tree. I highly recommend both books, but The Pear Tree is one that demonstrates how indie books push the boundaries of age category, style, and structure to impressive results.

Sandrick’s novel is set during the Second World War and portrays the total destruction of a Czech town, Lidice, in retaliation for the assassination of notorious Nazi SS official and occupation ruler Reinhard Heydrich. Her third person omniscient narrative alternates the perspectives of several Nazi officials and inhabitants of Lidice, though three Lidice residents dominate. The first is Chessie, the gentle, well-liked mother of 10-year-old Ondrej, a defiant bully wannabe. The second is 14-year-old Milan, the quiet younger brother of the bully Ondrej idolizes. The third is Klaudie, the snobbish wife of a local leader and the mother of two teenagers, a boy known for his intellectual ability and a girl known for her beauty. After the Nazis round up the villagers, they shoot the men and sort the women and children into three groups — one to be gassed immediately, one to be sent to concentration camps, and a handful of blond children to be given to childless German families in the Lebensborn program. Beaten by soldiers and left for dead, Milan escapes and joins the Resistance, while Chessie and Klaudie try to find information about their children during their internment in the Ravensbrück concentration camp. 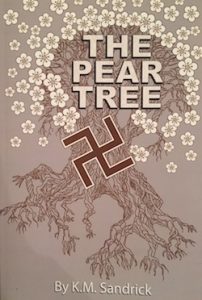 The paperback cover of The Pear Tree uses a less appealing two-color process, but it keeps the price low for readers who prefer dead trees.

The writing is vivid, immersing the reader in the time and place while not letting minutiae overwhelm the story. Sandrick provides more information in an author’s note, cast of characters, glossary, and list of sources at the end. In all, the characters are front and center, and Sandrick has made good decisions as to which perspective works best for the scene. I also appreciated the ethical dilemmas she set up and the friendships and petty disputes among the townspeople that have outsized impact when the whole town is facing the unthinkable. The novel shows the loss of community and its effect on the individuals displaced from their home and torn from each other. It also shows the long-term trauma of war and atrocity on the surviving characters, who must go on with their lives even though their village is destroyed and they and their fellow Czechs have endured terrible losses.

While published for adults, this novel will appeal to teen readers of historical fiction. About a third of the story is from Milan’s perspective, and I think it’s shortsighted and simplistic to assume that teens don’t want to read books that include adult perspectives, especially when those sections explore survival in wartime, the impulse toward revenge, and the quest to find missing loved ones. Not every teenager wants to read about “chosen” teens in fantasy or contemporary stories set in a high school just like their own. In Gringolandia, my teenage characters, Daniel and his girlfriend Courtney, inhabit an adult world, and I was thrilled that readers appreciated seeing this world that was part of their own reality as well as their future.

Like “rebellious book” Queer as a Five-Dollar Bill, The Pear Tree deserves a lot more attention than it is likely to get as a self-published title — and I hope you, dear readers, prove me wrong on the lack of attention for both these titles. Sandrick has produced a novel that will compel and challenge readers, high school and up, with great worldbuilding and storytelling, layered narrative, and complex themes.