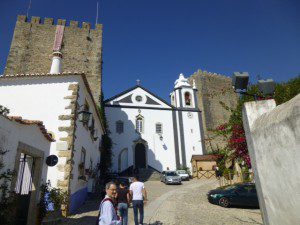 At the end of last week, Richard and I travelled by bus to the medieval town of Obidos. The town is surrounded by walls, which back in the day protected the townspeople from hostile elements real and fantasized outside. In exchange, the townspeople had to give their unwavering loyalty, much of their treasure, often their sons, and sometimes other things to whatever social betters (king, noble, etc.) lived in the castle. 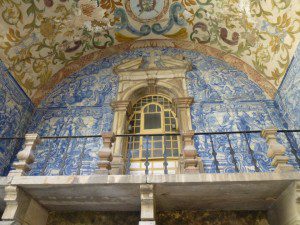 This town street ends at the church. Church attendance was usually mandatory in those days, but the church buildings were cool in the summer and warm in the winter and beautifully decorated in contrast to the rough conditions in which most townspeople lived. Not to mention the hope that the devout peasant’s soul might have better luck in the hereafter. So I suspect that few in those days considered mandatory attendance a burden. Hubby and I counted three separate churches in this village, all of them of good size. 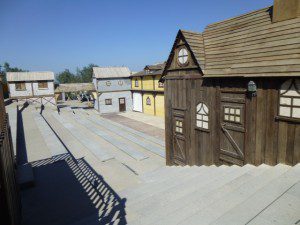 Today, the castle is a high-end hotel and restaurant, while the houses of the town mostly contain shops that appeal to tourists. Along with the restored churches are a reconstructed medieval theater and several museums.

One of the museums had a slideshow of fascist-era propaganda posters. This one reads “Breed Rabbits” (for food and pelts) but I suspect a subliminal message as well, seeing as rabbits usually need no help in breeding. 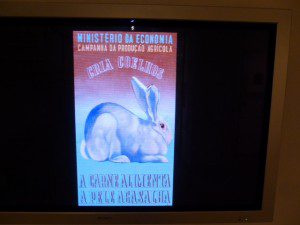 We went to Obidos the day before a national holiday, and when we returned to Lisbon, the bus station was packed with students and others with families elsewhere, going home for the long weekend. As a result, Lisbon this past weekend reminded me of New York City on Memorial Day, Fourth of July, or Labor Day weekend, when us locals who couldn’t afford to travel or had no place to go felt like we had the whole city to ourselves — well, except for the tourists coming in.