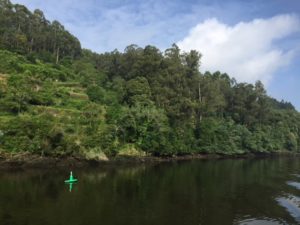 A dense forest outside the Porto area.

In the five times we’ve traveled to Porto before this year, Richard and I have never taken a cruise along the Douro River, a voyage highly recommended by others for its breathtaking scenery and winery tours. Part of the problem is that there are a limited number of day-long tours and they book up quickly. Multi-day tours that go all the way up the river into Spain (where the river is known as the Duero) are more available but also much more expensive, as they include a stateroom and all meals. This year, we vowed to be more organized, and although our first-choice tour was sold out, we did manage to find an option that involved an eight-hour boat trip upriver, a visit to a winery, and a bus back to Porto. 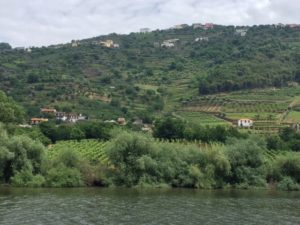 Upriver, those forests give way to terraced hillsides.

The boat was jam-packed with tourists, about half of them Portuguese-speaking, and the rest mainly from France, Switzerland, Scandinavia, the UK, and the US. Although the entire deck was covered with chairs, there weren’t enough for all the passengers, so we stood or found seats where we could (including the floor of the deck). The tour came with breakfast, lunch, snacks, and lots of alcohol, and travelers could purchase more at a bar below. By the end of the trip, a good number of passengers were drunk and rowdy. However, most of the people on the tour were over 40 years old, and there were a smattering of families — mostly from a large Portuguese family that was celebrating a birthday — so it was far from a mayhem-filled party boat. I imagine one can find those kinds of tours as well, because the company that operates the day trips has multiple offerings. Built between 1965 and 1973, the Régua Dam is an important source of electricity.

Shortly after leaving the dock in Vila Nova de Gaia, across the Douro from Porto, I found out the reason for the limited number of cruises. Our cruise crossed three dams, which meant going through locks. Only two boats could fit at a time, and the process took at least 20 minutes. The two lower dams were built in the 1980s, and, along with the multiple bridges overhead and a long tunnel through a mountain on the bus ride back, they show the impact of EU money on Portugal’s infrastructure. The passage through locks was a fun experience, as our passengers and crew waved and called to those on other boats, and people walking on top of the dam waved and called to us. 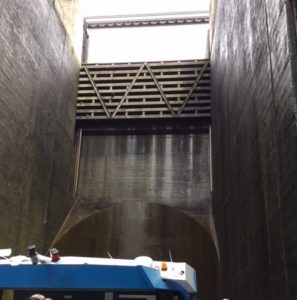 A lock on the Régua Dam.

Richard wanted a longer cruise for the scenery, and it was definitely worth the trip. The boat took us through the urban environment of Porto and Vila Nova de Gaia through newly-built suburbs, older villages now part of the metropolitan area, dense forests, and as wine country approached, terraced hillsides planted with vines. We saw kayakers along the river, an abandoned cargo vessel, and riverside towns with docks for shipping agricultural products and sometimes small beaches for the residents to enjoy. We set out early on a Saturday morning, and at first the towns’ streets were deserted, but as we stopped at the larger towns of Régua and Pinhão later in the day, locals and tourists filled the streets. At Régua, one of the major towns along the way and the site of the first dam, built in the 1960s, a large group of men and women with yellow t-shirts from a sporting club in Olhão — a town in the Algarve, many hours to the south — boarded and rode the rest of the way with us to Pinhão. 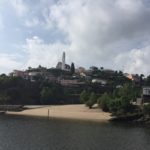 Town with a beach 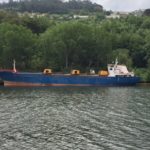 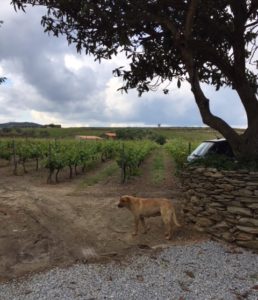 A winery estate in Favaois, with a dog.

While Richard prioritized the scenery, I wanted a winery tour. Part of the reason is that I’d recently cut a scene from my novel revision in which one of my three main characters tours a winery with the aunt of another main character and has to listen to the aunt, who works for the winery, trash her niece. I’d promised readers that I’d put the deleted winery tour — or a similar one — in my blog, since it would have more appeal to someone interested in travel than someone reading the book. The winery we visited was near the town of Favaios, at the top of a mountain, and we had to take a harrowing bus ride with sharp turns and steep drop-offs to get there. It turned out that the winery didn’t actually make the wine, except for a small batch of excellent muscatel from the muscatel grapes grown there. Rather, they sent the grapes into Favaios, where a cooperative that gathered the produce from the entire area, made wine that was, for the most part, consumed within Portugal rather than exported. The winery in my book had the same collective structure, but we didn’t get to see the manufacturing plant, only the estate on this tour. The estate staff treated us to a cocktail party with sausage, cheese, bread with a delicious jam, and samples of the local blended wine and the muscatel. 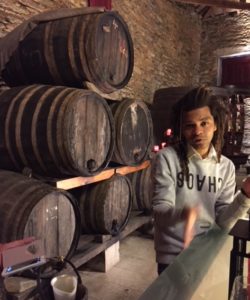 On the winery tour, with barrels of the estate’s signature aged muscatel.

The bus ride back took almost two hours along a well-constructed major highway (another benefit of EU membership), and we arrived at the docks 13 hours after we departed. We’d experienced breathtaking scenery, adequate food, plentiful drink (which we didn’t partake in for the most part because I didn’t want to drop my cellphone overboard while taking pictures), not-very-informative tours, lots of people on a crowded boat, and a nice cocktail party. Other tour options take less time. For instance, you can take the train to Régua and ride the boat for a couple of hours to Pinhão and then take the train back. Or you can stay overnight in one of the towns; various people recommended Pinhão for this. Keep in mind, though, that the river tour is definitely a slow-down part of the trip, and if you’re planning to visit a city or town each day and see all the castles and museums you can in a limited amount of time, this may not be right for you. But if you need a “vacation from your vacation,” a chance to relax and take in the nature passing by, add a Douro river cruise to your itinerary. 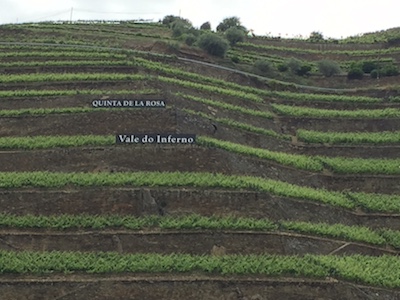 The producers of port wine have their own estates in the region where their grapes are grown.