Over the summer I cut back on my Instagram posts, mainly because I was working as a graduate assistant at the VCFA summer residency and then traveling. I was surprised that I didn’t lose followers, even though my “like” count was a bit down immediately on my return. (My numbers have bounced back since.) 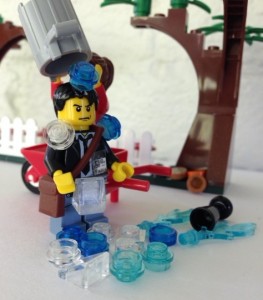 Before she sent him away for the writing retreat he’d always wanted to attend, Mireille got Patricio for the ALS Ice Bucket Challenge. One of my most popular Instagram photos.

My first year of Instagram has made me aware of a certain type of poster known as a “feed spammer.” In an effort to build followers quickly, the feed spammer puts up multiple posts — sometimes dozens of posts — a day. If the photos aren’t good, no one likes, no one follows, and the person either quits or rethinks his or her strategy, focusing on only the best photos.

But what if the person IS good? I have followed about a dozen good to excellent Lego photographers who post multiple pictures daily. But then I see problems — too many photos that look alike, some less-than-quality photos in the mix, sloppy captioning. And the biggest problem — the photographer builds up a fan base in the space of one or two months, and then burns out. Great photos — and then no more. I think, “Why couldn’t that person put up one photo a day and entertain us for an entire year or more?” because the entertainment value of a photo — no matter how good it is — diminishes with each multiple in a short space of time. 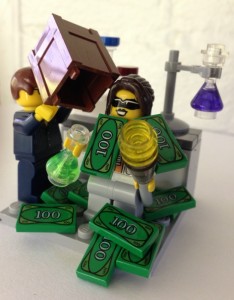 Dr. Drea is working hard to find a cure for ALS, and your generous donations through the Ice Bucket Challenge will help her continue her effort to wipe out this terrible disease. This is my second most popular photo on Instagram.

The problem of feed spammers, with their associated diminishing returns and potential for burnout (theirs and mine), occurred to me in the course of a recent discussion with other writers about the pace at which some authors’ books are coming out these days. It took me 22 years to write Gringolandia and get it published. It came out three years after my adult novel, Dirt Cheap, which came out three years after Once Upon a Cuento. Until Curbstone Press folded, I was on the “three-year plan” and envied those authors — including one in my critique group at the time — who had books coming out every two years. After Curbstone’s demise, there were four years between Gringolandia and Rogue with a manuscript in between gathering dust on a shelf.

Nowadays, I see authors with books coming out every year, or even twice a year. Post-Gringolandia, I consider myself a fast writer, but I can’t write and revise a novel in less than a year, and if I did, it would be because I’d plagiarized myself, lifting large amounts of characterization, plot, and verbiage from previously published work. At best, I would become like the feed spammers whose pictures look alike. At worst, I would be putting out work that isn’t ready, thereby testing the patience and loyalty of my fans.

According to the authors with whom I’ve spoken, the buzzword now among corporate publishers is “branding” — the regular release of predictable content to keep fans satisfied. But is it sustainable without burning out the writer and his or her readers? And does the publishing of fiction for children and teens then become less creative endeavor and more the churning out of content for a corporate entertainment industry?

Asking these questions will probably not endear me to the executives of this same corporate entertainment industry. But as a creative person — and one who appreciates the creative work of others — I know these questions need to be asked if we are to honor and encourage the best work of our writers and artists.