Due to the encouraging reception I received for my presentation on the “Contested Histories: Portraying the Complexity of the Past for Teens” panel at the AWP (Association of Writers & Writing Programs) conference in Washington, DC last week with A.B. Westrick and Ann Angel, I have decided to make the presentation available on this blog in two parts. Two days ago, I published Part 1, where I talk about some exemplary novels that portray World War II and the Cold War in Europe. Part 2 focuses on the Cold War in Latin America and my own writing. 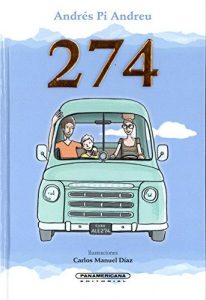 My work-in-progress set in Portugal in 1966 is not the first time I have ventured through my writing into the contested histories of the Cold War. From the 1950s through the 1980s, the United States was involved in a proxy war with the Soviet Union in Latin America. Most of the recent books for young readers that depict Latin American history during that time have either focused on the Cuban refugees from Fidel Castro’s Communist dictatorship—examples include Christina Diaz Gonzalez’s The Red Umbrella, Enrique Galbis Flores’s 90 Miles to Havana, and a middle grade novel I’m currently translating from Spanish to English that was first published in Colombia, Andres Pi Andreu’s 274—or neutral children and teens caught between government forces and left-wing guerrillas in Guatemala and El Salvador, such as Marge Pellegrino’s Journey of Dreams and Skila Brown’s Caminar. 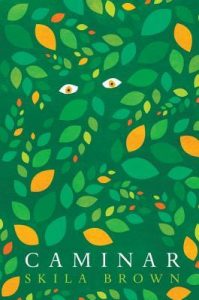 But in Chile, where a U.S.-sponsored military coup against the elected leftist government of Salvador Allende ushered the 17-year Pinochet dictatorship, I found complexities that defied the dichotomy of East and West. I sought to portray these complexities in my young adult crossover novel Gringolandia. While my teenage protagonist, Daniel, lives with his mother and sister in safety in the United States, his father is a political prisoner under the dictatorship. His jailers accuse him of being a communist. When he is released and rejoins his family in exile, an attendee at one of his lectures accuses him of being a communist. (He, in turn, accuses the questioner of being a CIA agent.) Is Daniel’s father, a banned journalist and the publisher of an underground newspaper, really a communist?

In the end, we discover that this husband and father who refused to run away from the struggle, who put his body on the line every single day until his people won their democracy again and suffered tremendously because of it, was, in fact, a member of Chile’s Communist Party. Daniel reveals this closely held secret two years after the main action of the novel and a month after the 1988 plebiscite that ended the Pinochet dictatorship:

It’s the first of November when Papá calls me from work again. The victory must have sunk in, because he sounds much happier. He’s thinking of buying a house, he tells me, even if for a good communist it feels like selling out.

“I asked Ileana [his sister & Daniel’s aunt] and she reminded me that Pablo Neruda was a communist and he had four houses,” Papá says. “My one house would be nothing compared to that.”

He asks me what I think.

“Why?” He knows I don’t care about the details of left-wing politics.

“You’ve never owned a house. How long has it been since you even slept in your own bed?’

For a few seconds he doesn’t respond, then he says, “I asked some of my friends in the Party too.”

“Do you need their approval?” I ask.

“No. I mentioned it when I asked them to get me a gun. For protection, you know, since I’ve pissed some people off over the years. They told me the house was a good idea.” He paused. “But they wouldn’t give me the gun.” (Gringolandia, pp. 260-261)

For those indoctrinated in the dichotomy of communism and capitalism, the idea of a communist buying a house is itself a contradiction. (Not that it stopped the Nobel Prize winning poet Pablo Neruda from owning multiple houses.) There’s also the historical fact that in Chile the communists, along with many Catholic priests, nuns, and lay people, risked more than anyone else to end the dictatorship and restore human rights and democratic rule. Yes, I said democratic rule. Not a dictatorship of the proletariat, and not a theocracy. And of all the people who opposed Pinochet, the communists paid by far the highest price in terms of imprisonment, torture, and execution. Many disappeared, and their bodies still have not been found. 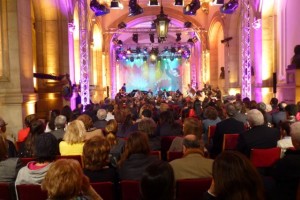 At the National Assembly in Lisbon, people of all political stripes come together to celebrate the life of José (Zeca) Afonso during the 40th anniversary of the Carnation Revolution.

In my work-in-progress, THE HOUSE OF SILENCE, set in Portugal in 1966 my protagonist Rosália’s younger brother becomes a communist. When she reminds him that the communists killed millions of people during the Stalinist purges, most of them people of faith, he responds, “We aren’t like Stalin. We’re the ones getting killed around here.” My own interest in these struggles against dictatorships in Portugal, Chile—and Cuba—has grown out of my commitment to human rights and to the dignity of all persons. It’s why, ultimately, I seek out and write stories that reaffirm our bonds to each other regardless of ideology or what side upon which the characters find themselves. 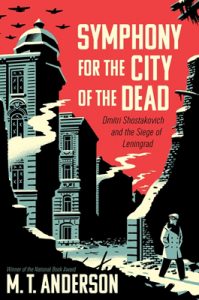 At the same time, I take to heart M.T. Anderson’s observation that the theme he returns to most in his work is how utopias so easily become dystopias. It’s at the core of his speculative fiction classic Feed, and his most recent work, which explores the heady early days of the Russian Revolution, the frightening swiftness of Stalin’s crackdown, and the devastation of the Second World War through the life of composer Dmitri Shostakovich and his best known work, Symphony 7, also known as the Leningrad Symphony. After reading and reviewing Anderson’s Symphony for the City of the Dead: Dmitri Shostakovich and the Siege of Leningrad last year, I returned to Portugal and found myself at their new Museum for Resistance and Liberation, where that same symphony accompanied a newsreel-style history of the Salazar dictatorship and its connection to the ideology of the Nazis. Yes, we each have our perspectives on contested histories, but as writers of fiction, our job is to explore and celebrate human desires, emotions, and relationships; to build bonds of empathy between our characters and our readers; to depict our world past and present with honesty and respect; and to create works of beauty that transcend our differences.