Armchair Traveler Through Time: An Interview with Amber Lough

As armchair travelers during this pandemic, we visit faraway places through books — not only real places but also ones imagined, full of magic. We can travel to places that no longer exist or that were very different years ago. We currently live in a time of great danger, but books set in the past show us that we’re not the only ones to experience danger and societal upheaval. Russia in 1917 was a difficult place to be, with losses on the World War I battlefield and revolution at home. For the tsar and his supporters, it was the chaotic and violent end of an era, but for for revolutionaries of various stripes — communists, democrats, supporters of women’s suffrage and equality — the chaos of the present raised hopes for a better future. 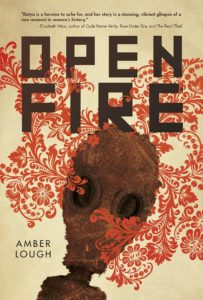 Amber Lough captures that fateful year in Russia in all its complexity, confusion, and peril in her new historical novel Open Fire. Her protagonist, Katya, enlists in the First Russian Women’s Battalion of Death commanded by Maria Bochkareva and goes from making grenades at a munitions factory to launching them at German soldiers on the Eastern Front of World War I. Yesterday, I reviewed Open Fire for The Pirate Tree, and today, Amber has come onto the blog to talk about her inspiration for the book, her research process, and what it means to write about war and revolution in our current situation. An Air Force veteran and graduate of the MFA program in Writing for Children and Young Adults at Vermont College of Fine Arts, she currently lives in Germany with her husband and their two children. She’s the author of two previous YA novels, both fantasy, The Fire Wish and The Blind Wish.

LML: How did you learn about Maria Bockkareva and the Women’s Battalion of Death?

AL: I was working on a historical novel set in 1917 Leningrad and having a terrible time finding the story, when a friend of mine in St. Petersburg randomly messaged me a story about Bochkareva and the Women’s Battalion of Death. It shocked to the core — even with a degree in Russian Studies, I’d never heard of them. I was outraged.

Much of Open Fire takes place in basic training and on the Eastern Front battlefield in World War I. How did your own experience in the military help you understand what Katya and the other fighters went through? Where else did your research travels take you?

Although I was technically at “the front” in Baghdad, it was a wholly different sort of war. Not just the reasons behind it (well, actually, I think nearly all wars are based on greed) but technology. I was one of a few women, but the odds were still about 1 to 100, I think. I also wasn’t carrying around a rifle and going door-to-door, doing combat. The US still balks at the idea of women fighting as foot soldiers. It wasn’t until 2013 that the US removed the restriction for women to go into combat…nearly 100 years after Russia.

I went to Russia with my friend Elizabeth Wein in 2016 to do research for this book (and she for her book A Thousand Sisters about the Soviet airwomen of World War II). It was immensely helpful to go to the museums and see the artifacts/weaponry in person. There is nothing like dragging your eyes along a Mosin-Nagant M1891 rifle with affixed bayonet.

Open Fire takes place during a time of great social and political upheaval in Russia, and you show well through your characters that no one was totally right or wrong. However, is there a particular character with whom you identify?

I identify most with Katya, of course, but if I had to pick a secondary character, it would be Masha [Katya’s best friend from childhood]. She wants beauty and peace, but she is willing to accept the reality of the war and isn’t willing to just sit idly by. She’s also a bit chatty, like me.

How does Open Fire shed light on our current situation in the United States and in Europe, where you now live?

Oh, gosh, I don’t know. Some things never change, like how women are still paid less and suppressed. As far as politics goes, I suspect there are some teenagers out there who are torn between what they believe is fair and just and what their parents say is fair and just. I hope with all my heart these teens are able to rise above it with their minds intact. Naturally, the current pandemic is changing things rapidly for all of us. The 1918 flu epidemic isn’t an issue for Katya in Open Fire (it is, ahem, 1917 for her), but the war had its nails scratching at everyone’s lives, just like this. Katya feels compelled to do something, to make a choice, and I believe most of us will be faced with this in the coming months, even if the decision is to finally do that thing we’ve always said we were going to do or to take more naps. 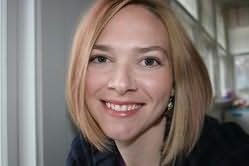 Tell us about your publication journey for this novel. Was it hard to find a home for a YA historical novel set in another country?

The publication journey was probably similar to a lot of other historical novel. I don’t think it was any harder to get it published than it might have been if it had been set in the US because most publishers are fine with publishing historical YAs set outside the States. I’m not sure how many editors received it, but once I met Amy Fitzgerald at Carolrhoda Lab, I knew it was fate. She completely understood the story and what I was trying to do. It helped that she had studied Russian history, particularly the Russian Revolution.

I’m working on a couple of projects, all of them completely different in genre and theme from the other. I have another historical YA in the very early stages, but I don’t want to say too much about it because I am rather superstitious about these things. My other projects include a YA fantasy and a middle grade sci-fi. This month, I’ll be focusing on the YA historical because it suits my current mood and it has the most momentum.