A Journey Through Time with Deaf Author Ann Clare LeZotte

Martha’s Vineyard is a popular vacation spot today, but in the early nineteenth century, it was home to the largest Deaf community in the United States, a community that had developed its own sign language, eventually incorporated into ASL. Deaf author Ann Clare LeZotte’s middle grade novel Show Me a Sign portrays 11-year-old Mary Lambert, a deaf girl growing up in the town of Chilmark whose encounter with a so-called scholar from the mainland threatens her, her family, and their way of life. Two months ago, I reviewed Show Me a Sign for The Pirate Tree. Today, Ann Clare will guide us on her journey as a writer of historical fiction and what brought her to Martha’s Vineyard and to this story. 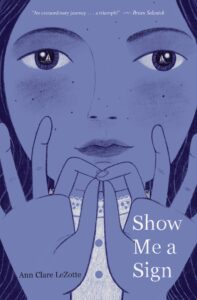 L.M-L: How did you learn about this Deaf community on Martha’s Vineyard, and why did this particular story speak to you?

A.C.L: I received my B.A. from Sarah Lawrence College in 1991. I started working at my hometown (Oyster Bay, Long Island) library. My college friend Maggie wrote to say she’d moved to Cape Cod. In those days, I would pack everything in my car at the drop of a hat. I resigned from the library and moved to the Cape. It was during my first trip to off-season Martha’s Vineyard that a cab driver told me about the island’s history of deafness, mentioning the high prevalence in Chilmark. I became immediately fascinated. I was amazed that this Deaf utopia existed centuries ago that was more progressive than the world around me.

Describe your research process. How do you immerse yourself in a place and time so distant from your own?

Well, I took another cab (I was staying in Edgartown) to visit Chilmark that same visit. Then and again, I did research at the Chilmark Free Public Library and talked to anyone who would engage with me. At that time, I had stopped using oral speech and (in the days before cell phones and tablets) I carried around a pad and pencil to communicate. Even though I was an “oral success” as a kid, I went through a period in my twenties where I just felt I couldn’t be oral anymore. I was defining my own boundaries. And radicalizing by reading all I could find on Deaf culture and history. I’m a sign language linguistics buff. Of course, I visited many other sites on the island and bought local history books and then spread out to Massachusetts history. Boston is my favorite American city. I’ve walked it up and down and it sparked my imagination. I dreamt myself into the story years before I wrote it.

Mary Lambert is such a vivid and compelling character, and what happens to her in the course of the story is horrific. How much of her story is based on true events, and how did you fill in the gaps?

Nora Groce’s ethnography Everyone Here Spoke Sign Language: Hereditary Deafness on Martha’s Vineyard (Harvard University Press, 1985) was my primary text. Several incidents in SMAS are taken directly from her book, like early 19th century Vineyarders signing to each other at a distance using spyglasses—an early Zoom! The overall impression of Groce’s book is that residents didn’t distinguish between deaf and hearing, or, rather, they didn’t make much of the difference. I love detail—clothes, houses, boats. I wanted some STEM elements, like owl pellets and the American Enlightenment. Perhaps my favorite compliment on the book came early on when Brian Selznick remarked: “Wow! You did a lot of research and blended it in well.” I hope that’s true. In terms of Mary’s ordeal, I’ve seen readers call Andrew Noble a “mad scientist” — but his ideas are all too common for the time. Once those props were built, breathing life into the character of Mary wasn’t easy. I’ve been maltreated because of my deafness. I found personal experience much harder to blend in. Those were the crucial, painful gaps. 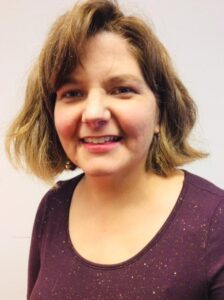 Show Me a Sign does a superb job of showing how people who are marginalized in turn oppress or marginalize others. The Deaf families are also settlers who have taken land belonging to the Wampanoag peoples and are threatening to take more. Was this part of your original plan for the novel, or was it something that emerged in the course of your research? How do you portray the truth while maintaining sympathy for characters whose existence rests on privilege and who may or may not be aware of it?

I didn’t think of it much in my first draft. When I did, the material was painfully stereotypical. There was a Wampanoag ghost in a graveyard. Ack! I was an ASL tutor on the Cape and one of my students who became an interpreter is Mashpee. I thought I was enlightened. But we know we have to do the hard work. It takes both external education and deep plunging into oneself to get rid of the fantasy ideas we have about Native nations and Black history. For me and Mary, this eye-opening came from books and personal interactions. I was writing against romanticized classics like Little House on the Prairie. If you scratch the surface of early American small towns, they were outrageously dysfunctional. Why not be honest? I work at the library with Florida Black Native families. They offered critical feedback along with my expert sensitivity readers. That was the trick—being honest about racism and anti-Indigenous prejudice in Mary’s family and community, while showing other ways of being. There isn’t anyone who gets everything right. Our loved ones are flawed. It was important to me that Mary’s bigoted friend Nancy escapes her awful parents’ influence and may become someone wiser. I knew it was essential to reveal that the first, revered Deaf Vineyarder Jonathan Lambert worked on a slave ship. That information was hard to dig out and confirm. White marginalized folks often write exclusively from victimhood. I couldn’t play that game.

Tell us about your publication journey for Show Me a Sign. How has the industry changed, and how has your writing evolved since your first novel came out in 2008?

T4: A Novel in Verse was pulled out of the slush pile at Houghton Mifflin. I’m forever grateful to my editor Margaret Raymo. Today, I find the book desperately lacking and I apologize for the repeated use of the slur “g**sy.” Due to my disability, I was a delayed reader as a kid. Literacy can still be challenging for me. I think I’m living the life I never had in middle grade fiction! Anyway, I had the bare bones of Show Me a Sign and showed Margaret. She was very encouraging. But I heard the same thing from several sources: there’s no interest in/market for books about Deaf history. I kept writing but didn’t submit much. Then I connected with Brian Selznick. He introduced me to Tracy Mack, his editor at Scholastic. She saw possibility in me and my work. When I knew I was signing with Scholastic, I desperately tried to find a literary agent for the deal. No one would take me. Now I’m delighted to be represented by Leslie Zampetti at Dunham Literary. There’s no doubt that the #ownvoices movement gave me the writing career I’d come to believe would never happen. I realize it’s better that it happened now when I’m fifty. My younger self would never have believed that!

What would you like middle grade readers to take away from your novel?

I want D/deaf kids to find a character they can journey and dream with. I’ve seen criticisms that Part Two is melodramatic. After reading the ways Mary is tortured and almost succumbs to self-loathing, I knew they’d need to see her as a heroine in her own adventure. I believe derring-do has a place in children’s fiction! For hearing kids, I want them to enjoy the book too. And to consider: which is the problem, that Mary is Deaf or how society treats her because of her disability? It’s really a book about audism or ableism, without using those heavy terms. I enjoy reading reviews from parents, teachers and librarians. Their observations enlighten me.

All the years I spent reading every scrap of Deaf history and sign linguistics I could find, and writing when the library and family allowed, while mentoring D/deaf and Hard of Hearing youth, gave me a wealth of material. I could write for years and not run out of ideas. I’m working on middle grade novels with and without Mary as a character. I’m  thinking about a fun Deaf detective series for K-3 readers. That’s the project I pitched to Leslie—we’re going to do it one day!

Ann Clare LeZotte is Deaf — bilingual, bicultural. She’s the author of Show Me a Sign (Scholastic, 2020), which Kirkus called “a must-read.” Ann Clare has worked in Library Youth Services for 12+ years with a focus on underserved populations and inclusive programming. She lives with her family (including rescue dog Perkins) in Gainesville, Florida. Some of her influences are Karen Hesse, Rita Williams-Garcia and Erin Entrada Kelly.