A Historical Drama and a Master Class

Two months ago, my husband’s Italian friend and sociology professor colleague — the one with the identical twin girls — recommended a 10-year-old French historical TV series that was released with subtitles in the United States in 2018. Titled A French Village, it follows a fictional small town located in Occupied France across the river from the collaborationist Vichy Regime from June 1940, when the Nazis took over, to the years right after the war. Richard and I started watching at the end of September, and we’re now midway through the third of seven seasons, in the middle of 1942. We usually watch an episode a night. And while it’s probably not the best idea to watch a series about a town terrorized by a fascist occupation regime while we live in New York City during an election that will determine whether the United States remains a more-or-less functional democracy or, in the midst of a deadly pandemic, descends into a chaotic authoritarianism with a ruling party that hates liberal cities, we cannot turn away. 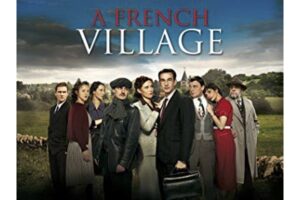 As a writer of fiction who looks at other fictional creations to see how they work and what lessons I can apply to my own projects, I see A French Village and its addictive qualities as a master class. It’s most relevant to me because I write historical fiction; if you write fantasy, for instance, you may find Game of Thrones more relevant. And while the series is not without its flaws, including plot holes and retconning (creating new scenes that retroactively change established facts or interpretations), it stands out for creating complex characters that the viewer cares about and cliffhangers that leave those characters in physical and/or emotional danger.

Let’s talk about characters first. A good series has enough characters to explore events and relationships, and each of those characters has depth and complexity. Not enough characters, and there aren’t enough layers to the story, and if any of those principal characters dies or goes away, the story is poorer for their absence. While a couple of my favorite characters in A French Village haven’t made the transition from the second to the third season, the remaining ones are interesting enough to carry the story. In addition a fascinating new character has just arrived, a World War II-era Scheherazade whose talents as a fabulist add intrigue to the series while introducing an element of metafiction: the ability to tell a story and maintain the interest of the listener means survival for her…and for this series. (Readers of my reviews here and on The Pirate Tree may have already guessed that I’m a sucker for metafiction, defined as a story or elements within it that offer commentary on traditional narrative techniques.) At the same time, there aren’t too many characters, or characters so poorly differentiated from each other, that the audience loses track of them or doesn’t care enough about them to keep watching.

How does the writer differentiate characters in a large-enough cast to support a series? The writers of A French Village do so by giving each of the characters a clear desire line, a network of relationships, and complex dilemmas that show each one capable of, for instance, both great generosity and monstrous cruelty. Because they live under an occupation, they have to make compromises and even kindness has its cost. This is most clearly embodied in the character at the center of the story, village doctor Daniel Larcher who becomes the mayor after the original mayor flees the advancing German army. Right away, he delivers the baby of a Spanish refugee, but the mother doesn’t survive. Daniel’s wife Hortense, unable to have a child of her own, seeks to raise the child, but somewhere out there is a bereaved father. Will the Larchers — among the wealthiest villagers — give the child love and a better chance for a good life in the midst of wartime, or does the child belong with his refugee father? And what unethical arrangements will Daniel and Hortense make with the well-meaning but less-than-competent chief investigator for the police and his handsome, ambitious young underling with an attraction to older women? Everyone in A French Village is both a hero and a villain — even the children who the series writers don’t hesitate to place in horrific situations beginning with the very first episode. 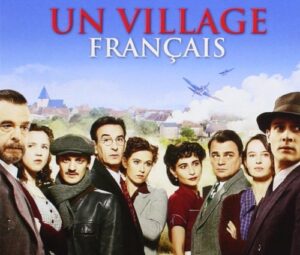 Besides their desires — mostly for love as they interpret it — the characters connect with viewers through their acts of kindness. Except for the German SS and Gestapo officials, there are no totally bad people. The overzealous young police investigator Jean Marchetti probably comes closest, and the filmmakers effectively juxtapose his good looks with his hard heart and manipulative personality. (Or maybe Marchetti is destined for moral greatness later in the series.) Caring for children and others who are vulnerable, helping Jews to escape the death camps, and risking their lives in the Resistance offer a measure of redemption to those who cheat on spouses or break up marriages. Viewers also see that being part of the Resistance, the “good guys,” comes with its own moral dilemmas, from not doing enough to save lives to executing informants before they denounce the entire group. This is a historically-accurate portrayal of a real Resistance and what it’s like to be part of one. A French Village shows us the potential, good and bad, of fundamentally decent but flawed people. At a time in our nation’s history in which we wonder about the fundamental decency of our neighbors and how their choices will affect those who are most vulnerable, this series carries additional resonance.

Once we’ve come to care about the characters in A French Village, the creators hook us with the cliffhanger. It can come in various forms, and the variety prevents it from being seen as manipulating the audience. Sometimes, it’s a physical threat — machine guns blazing at beloved characters who are running away. Sometimes, it’s a moral choice — a character faced with surrendering a desire or objective to prevent a greater harm. Sometimes, it’s a mystery, or a dreadful consequence about to happen. In many cases, the next episode doesn’t pick up in the middle of the cliffhanger but shows the resolution days, weeks, or months later, leaving the viewer to fill in the missing space. It’s a clever way of keeping the series moving forward and inviting the viewer into the story, imagining what happened in the interval and wondering what will happen next. Novelists, particularly for middle grade readers, are encouraged to end chapters on cliffhangers so young readers won’t put the book down and forget to pick it up again. This series is especially good at showing the kinds of cliffhangers that can be brought into play.

A final note: This series was created in France and presented with subtitles. We in the U.S. have long been indoctrinated into believing in the supremacy of our own film and TV industry, and, yes, Hollywood has had enormous impact on the world’s cultural output. However, our own cultural output has stagnated over the years, creativity subsumed to bean counters pushing stock characters and simple, recognizable tropes. We have lost the ability to fill in the white space, to question received orthodoxy, to think critically about our lives, relationships, and actions past and present. In a recent op-ed in The New York Times, Michelle Goldberg argues that the past four years, with its conflicts and atrocities, have not enriched our culture but rather have impoverished it, as a would-be dictator takes over more of our national headspace. I would say that our loss of cultural leadership predated the rise of Trumpism, contributed to that rise, and won’t be turned around until we recognize that we’re in dialogue with the world’s struggles and neither separate nor exceptional. We have a lot to learn. It’s time to listen, to learn, to imagine again.