This past week, my classmate Sandra from Vermont College visited along with her husband and daughter. They live near Geneva, and this was her first time in Lisbon (he was here briefly on business years ago). We had a wonderful time together and a very busy five days seeing the city and travelling to some major attractions elsewhere in Portugal. 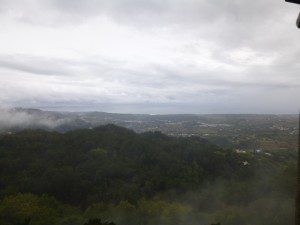 The weather was less than cooperative, but it didn’t stop us. On Thursday–the only true washout of the five days–we went to Sintra, a UNESCO World Heritage Site and the location of several castles or palaces of note. Our first stop was the Pena Palace, located atop a large hill and in the middle of a park that looked especially haunting in the mist.

The palace was built as a summer home by King Fernando II, a German prince who became king after marrying the Portuguese heiress Queen Dona Maria II and fathering their first child, Dom Pedro V. Fernando fancied himself an artist and commissioned the palace to resemble the style of palaces in his home country. It is a pastiche of Saxon architecture and that of his adopted country, incorporating Manueline and Moorish elements. 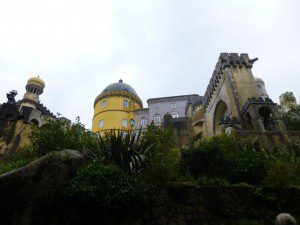 King Fernando II expended much of the treasury of a poor country on this palace, which was completed in 1847. While it wasn’t unusual for monarchs to fritter away their country’s wealth, the story goes downhill from here. Queen Dona Maria died in childbirth in 1853 at the age of 34. Because the heiress to the throne was no longer alive, Fernando could not remain the king, but he continued to live in the palace and when he died in 1885, ownership of this publicly-financed building passed to his second wife, a former opera singer. The Portuguese state repurchased the palace in 1889, under the rule of Maria and Fernando’s son, King Dom Luis I, who died later that year. By 1892, the Portuguese government was declared bankrupt, which happened again in 1902, all under the reign of Maria and Fernando’s grandson, King Dom Carlos I.

Paying twice for a palace the country couldn’t really afford in the first place contributed to the violent downfall of the monarchy between 1908 and 1910. Carlos I paid with his life and the life of his eldest son. On February 1, 1908 after the king and his entourage arrived at the Port of Lisbon, a pair of assassins awaited them in the nearby square. Two years later, the surviving son, King Dom Manuel II, agreed to step down in favor of the elected leaders of the First Republic.

After lunch, we visited the National Palace, located in the middle of Sintra. Because we weren’t allowed to take photos with flash and it was raining too hard to take pictures outside, I don’t have pictures of this 15th century palace, which got better reviews from our group for its unified design and exquisite interior. Many of the furnishings were imported from Japan, where Portuguese traders frequently stopped. (In fact, the Portuguese founded the Japanese city of Nagasaki in the mid-16th century, only to be massacred there or forced to convert in the early 17th century.)

My husband wants to remind everyone that this palace wasn’t cheap either, and that a tasteful and well designed residence for a monarch is still a drain on a poor country’s finances.