Last Sunday, Richard and I joined some friends for a field trip to a…parking garage. Francis, Leila, and their daughter Maimouna are originally from Paris, but they’ve lived in various cities throughout Europe and two years ago moved to Lisbon in large part because of the thriving art scene. We met Francis at Richard’s lecture on graffiti, and this parking garage, the Chão de Loureiro, features graffiti on the walls and pillars of five levels.

We started at the bottom, on the second level (below that is a supermarket–no graffiti there). The artist created the effect of cracks in the wall, with eyes peering through. 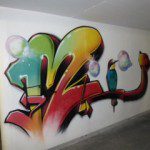 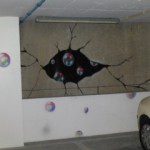 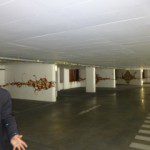 All of the work on the next level is in a reddish-brown hue that evokes henna patterns. I like the way this and the other artists used the specific layout of the garage to create work in continuous patterns. Francis was a real fan of this one. 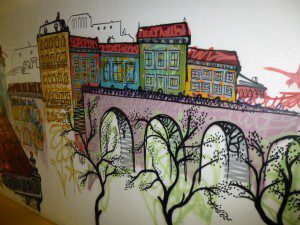 The next one was my favorite, so I’m going to include a couple of pictures. It features Lisbon landmarks such as the aqueduct (Aqueducto dos Aguas Livres) as well as collages that evoke the cultural icons of the city and of Portugal, such as the ship bound for parts unknown and the guitar that plays fado, songs of longing for those lost and the places left behind.

Imbedded in the guitar is also the eye of a fish. 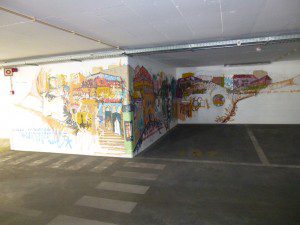 By way of digression, because I’ve been trying to work this factoid in for a while, the Aqueducto dos Aguas Livres was finished in 1852, and it brought fresh water into the houses of Lisbon. Three years later, in 1855, there was a cholera epidemic. Oops.

Fish have figured in several of my blog posts, because it’s a staple of the Portuguese diet. And oh, so fresh, if you can get past the doleful eyes of the creatures that took a wrong turn. Fish also figure in the painting on the artist on the garage’s fifth level. 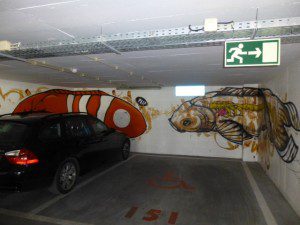 Incidentally, the clownfish (the orange-and-white one for those lacking recent experience with an aquarium or “Little Nemo”) has the same color scheme of my forthcoming novel. But this artist also acknowledged the importance of the land with this dressed-up tree and the rich fields that border the sea. 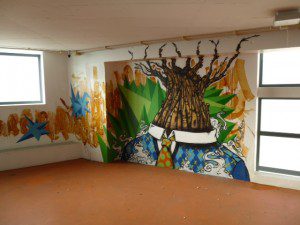 The sixth level contained a lovely surprise in addition to the murals that evoked a tumultuous sea and the ever-present perils of shipwreck, flooding, and death.

It was newly-installed outlets to plug in electric cars! (Actually, they’re still in the process of installation.) 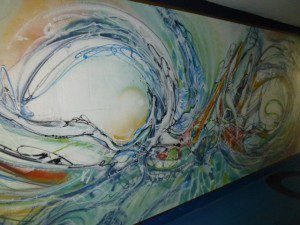 While far away in Lisbon, my thoughts are with everyone back home who lost so much due to Hurricane Sandy, a superstorm created in large part by the man-made rise in greenhouse gases and global climate change. Last year, when we were hit hard by Hurricane Irene (a storm in which I sustained a rather frightening injury), we were told that it was a “once in a hundred years” event. How does it happen, then, that another “once in a hundred years” event — one even more devastating — happens the following year?

In many ways, Europeans have the jump on us when it comes to sustainable living. In Berlin, our hosts told us about the higher fuel efficiency of 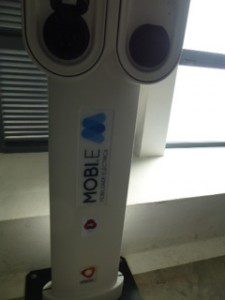 cars, the arrival of electric cars, and the use of renewable forms of power such as wind. Everywhere in Portugal there are wind farms, and several of my neighbors in Lisbon have installed solar roof panels. The public transportation is good in both Lisbon and Berlin, and the cities are compact and walkable. Where I live in Lisbon, one would be crazy to have a car because of the narrow streets, the hills, and the lack of parking. And gas is much more expensive, about twice the price it is in the United States.

Besides, while the parking garage offers a canvas to these five talented artists, you don’t have to own a car to see it!