Last weekend, as the Senate trial in Donald Trump’s impeachment was about to begin, the fourth Women’s March took place in cities and towns around the country. The first march drew several million people nationwide, but turnout has dwindled steadily. Knowing that the weather for the 2020 march in New York City would be less than ideal and the numbers small, I thought about not attending. Then I told myself, someone needs to go. And I went.

Yes, the turnout this time was in the low five digits, with commentators saying women have found more productive tactics, such as registering new voters and volunteering for electoral campaigns. And those actions certainly paid off in November 2018 with the Democrats recapturing the House of Representatives and placing at least one small check on the power of a wannabe despot and a complicit party seeking top-dog position in a dominant-party or one-party authoritarian state. 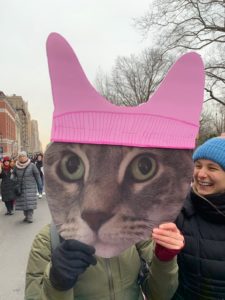 Worldwide, though, people have avoided losing valued and often hard-won liberties by getting lots of people into the streets. The clearest example today is Hong Kong, where hundreds of thousands of demonstrators have, for now, prevented an extradition law that would have sent dissidents straight to Chinese prisons and reeducation camps. Their demonstrations have translated into electoral gains as well. In the limited autonomy system that China has granted Hong Kong since the transition of power from the British, pro-democracy candidates won an overwhelming majority of seats in the local council. Elsewhere, mass demonstrations have prevented draconian anti-abortion laws in Poland, brought down a corrupt, long-serving prime minister and sparked a noted environmentalist’s electoral victory in Slovakia, rolled back subway fare increases and bared the long-term consequences of an unjust constitution in Chile, and forced the Iranian government to take responsibility for accidentally shooting down a passenger jet. While it remains to be seen whether such “street heat” can generate long-term reforms or prevent atrocities like the current ethnic cleansing in parts of India, they do have power that can translate into electoral gains in functioning democracies as well. 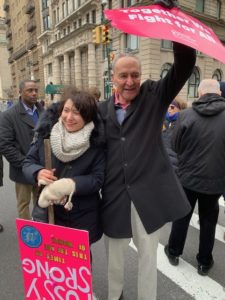 I tweeted this one: “The #NationalArchives will probably blur this photo but we were here with @SenSchumer at the #WomensMarch #NYC”

Knowing the power of mass demonstrations elsewhere, I attended this Women’s March, as I’ve done for all the others since 2017, and made it my special mission to communicate my opposition to the National Archives blurring mentions of Trump and words like “vagina” and “pussy” in an exhibit of photographs of the 2017 Inauguration and Women’s March in Washington, DC. Because I use museums to research my historical novels (see here, here, and here), I’m particularly sensitive to the way materials are selected and interpreted. I’ve never before encountered the blurring of images that criticize a leader, and doing so represents to me a huge step toward unfreedom. As I approached the march this year, I photographed New York’s Senator Charles Schumer greeting participants who held potentially censored signs. I also took many pictures of anti-Trump signs, so that even if the government’s exhibits censor them, I still have the documentation. By the time I got home, the National Archives backed down and agreed to display the unaltered images. Even though our numbers were relatively small, pressure worked.

We need more of that pressure. In the United States, people have always counted on elections to express their political will. In comparison with other countries, leaders have remained impervious to the demands of protestors in the street. Former president George W. Bush called us a “focus group” when he invaded Iraq in 2003, a disastrous move about which we’d warned him. Millions of mothers and students have demonstrated against the kind of unregulated gun ownership that has led to regular massacres, and gun laws have only become more lax. However, people in the streets, year after year, led to the gains of the Civil Rights Movement, the end of the war in Vietnam, and government support for research to combat HIV/AIDS. And even though it led to few actual reforms, Occupy Wall Street raised awareness of an economic and political system that enriches the few at the expense of the many and of the planet. 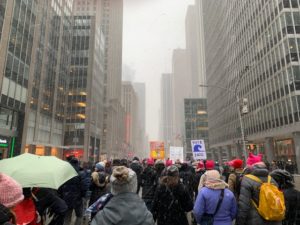 It started snowing and became very slippery very quickly. That’s how I fell and injured my ankle.

I didn’t want to spend my Saturday marching in the snow and ice. To make things worse, I slipped on the ice on my way home and badly sprained my ankle. Hobbling around with a cane five days later, I feel like a soldier wounded in my first week on the battlefield, telling the medic to patch me up and send me back into the fray. At a time when a minority of voters advantaged by an Electoral College system and foreign interference have put in leaders committed to rigging the system further and using our foreign policy to do so, people in the street are necessary to protect the freedoms we have. The integrity of our elections, and hard-fought gains we’ve come to take for granted, depend on how much we’re willing to risk to save them.