With Another Expansion, Little Brick Township Cleans Up

When I moved Little Brick Township to its current location in my New York City apartment, I figured I had room for seven more 32 x 32-stud baseplates’ worth of expansion. I thought that would hold me for at least four years, but my involvement in NYCLUG, the New York City Lego Users’ Group inspired me to create buildings of my own design. The Radio Station MOC and the Deli MOC (the official term for these homemade creations is MOC, or My Own Creation) soon occupied 1.5 of these free spots. 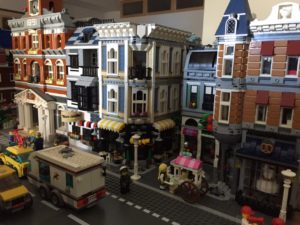 The new Assembly Square, next to my Deli MOC and Town Hall.

In addition, Lego released three more of their annual Modular sets since my move, and as a Modular collector, I had no choice but to buy and build each one. Both the Detective Office and the Brick Bank occupied one full baseplate each, but the 10th anniversary Assembly Square took up a whopping 1.5 baseplates.

After I finished and installed Assembly Square, my 7 free spots were down to two. I’ve drawn up plans to build a pair of MOC townhouses to go next to it, on the other side of my Deli MOC, which looks very much like it belongs in my town between Assembly Square and Town Hall. On top of that, I’ve heard that the forthcoming Ninjago City — timed to coincide with the Ninjago movie — is going to be a Modular set, occupying a full 32 x 32 baseplate with pegs to connect to other Modular buildings. While I may not add Ninjago City to Little Brick Township because of poor architectural “fit” (and if that’s the case, I’ll probably keep it at my daughter’s apartment because Tokyo is her favorite city), I’d like the option of having it as part of Little Brick Township now or in the  future. 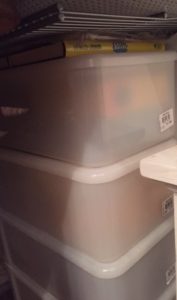 Rogue comes in useful, propping up my shelf so it’s the same level as the table.

I realized that I could expand my city by 4 baseplates without having it take over the entire apartment by moving each of the existing tables one foot away from the wall and installing a one-foot-deep shelf, the same height as the tables, in the space between the wall and the table. The shelf would also give me extra storage space for my building supplies and smaller constructions. I ended up using a metal Elfa shelf, custom cut to the 40″ width of the table and five storage bins on each side to hold it up. Because the shelf was still a couple of inches too low, I raised it on each side with a couple of pieces of cardboard and extra copies of my novel Rogue, particularly appropriate because photos of Little Brick Township are a popular part of my school presentations on this middle grade novel. 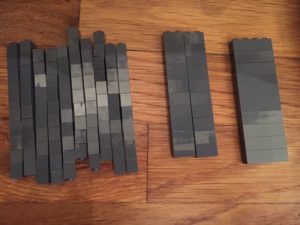 Stacking bricks in 10s, a trick I learned from my LUG.

Having storage drawers rather than open shelves prompted me to (finally!) sort my bricks in a systematic way. Until now, I’ve kept them in shopping bags and Pick-a-Brick plastic cups, some sorted by color, some sorted by size, but basically a jumble that adds time to my building projects. I devoted two days last week to sorting by color, type of pieces (bricks, plates, tiles, or specialized pieces) and size within each. I learned from my fellow LUG members that putting bricks together in stacks of 10 is a particularly useful way of sorting, storing, and using those bricks. (Less so with the flatter plates, because they’re much harder to separate once joined together.) Sorting the bricks allowed me to throw out a lot of the shopping bags, so the area under my table looks much neater and more open, making up for the fact that my town occupies an increasing amount of space in the apartment. 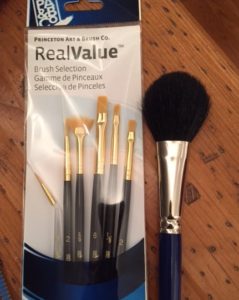 Expanding the footprint of the the town and rearranging it (with the help of three giant 48 x 48 stud places that I received as a gift at the last NYCLUG meeting) also gave me the opportunity to clean more than two years’ worth of dust on and underneath my table, as well as in the town itself. A couple of weeks ago I bought a set of brushes for this purpose because standard dust cloths would knock over the minifigures and small detail pieces on the buildings. At least for now, the town shines, and there’s room to grow. 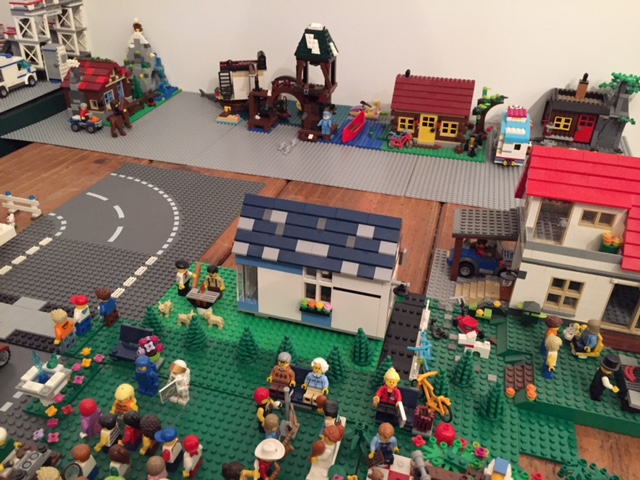 The township extension that my new shelf has given me.