Categories Menu
Home » Blog » Where Do You Want to Go Today? Reading Global Literature in Translation

Where Do You Want to Go Today? Reading Global Literature in Translation

I recently joined with other translators and advocates for translation to start a group called Global Literature in Libraries Initiative. According to the mission statement, “the Global Literature in Libraries Initiative strives to raise the visibility of world literature for adults and children at the local, national and international levels. We intend to do so by facilitating close and direct collaboration between translators and librarians, because we believe translators are uniquely positioned to help librarians provide support and events to engage readers of all ages in a library framework that explores and celebrates literature from around the world.”

This initiative involves the cooperation of members of various organizations, including the American Literary Translators Association (ALTA), the American Library Association (ALA), and the divisions of ALA, notably PLA (Public Libraries Association), ACRL (Association of College and Research Libraries), ALSC (Association of Library Services for Children), and YALSA (Young Adult Library Services Association). So far, the one translation-related award program within ALA is the Mildred Batchelder Award, administered by ALSC and given to outstanding children’s books originally published in another language and published in the United States in translation. We hope to draw more attention to the Batchelder Award and to the unique children’s books that cross borders and oceans. While PEN and other literary organizations give awards to translated books, we’d like to see ALA recognize these books so that both general adult readers and scholars have an entry point into the literature via “the best of the best.” 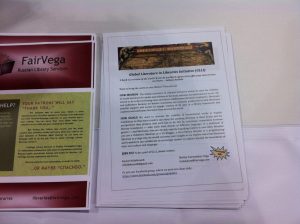 GLLI handouts at the FairVega booth at the PLA conference in Denver.

GLLI also plans to organize programs at conferences. Last month, some of us handed out literature at the FairVega booth at the PLA conference in Denver. We’ve put together a panel discussion to be voted on for the ALA Conversation Starter sessions. (If you’re a member of ALA, please vote for “Other People’s Voices: Using Global Literature in Translation to Reimagine Diversity in Libraries”; the deadline is at the end of April.) We are meeting with library directors to increase the number of books in translation in their collections and to organize programming around translation. While some of my colleagues were in Denver, I spoke at the Albany (NY) Public Library about diversity and authenticity and brought in my own experience as a reader of works in the original language and in translation, and as translator myself. For me, reading novels set in other countries, written by people who live in those countries, is like taking a trip without having to spend a lot of money for a plane ticket or sit in a cramped seat in a crowded, smelly airplane cabin for many hours. And if I check the book out from the library, the trip is free! That is why I often begin my talks about translation, as I began this blog post, with the question: “Where Do You Want to Go Today?” 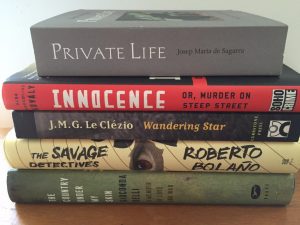 A selection of favorite translated books in my home library.

Last month at a translation event at the Center for Fiction, I chose a book on that basis. I bought Josep Maria de Sagarra’s Private Life, translated from the Catalan by Mary Ann Newman, because I wanted to read a story set in Barcelona. Through interrelated characters and vivid descriptions of the mansions, middle-class apartments, slums and red-light districts of the city,  Private Life portrays a declining Barcelona aristocracy in the first third of the twentieth century. I enjoyed reading the story and being immersed in a distant time and place, and the novel led me to learn more about the history of Spain at that time and the real people who show up at various points in the story.

The GLLI handout concludes with the invitation that I will repeat here: “Whether you are a children’s librarian or a YA blogger, a rural library director or a programming librarian in a large city, we welcome your insights as we explore ways that librarians and translators can collaborate to encourage readers to explore beyond the boundaries of their own culture and language.”