Categories Menu
Home » Blog » What? Is This a Joke?

What? Is This a Joke?

In the wake of the tragic attack on Charlie Hebdo in January I posted an essay in support of the magazine and freedom of expression in general. A lot has been written since then, including some who, while condemning the act of terrorism, felt that the magazine’s cartoonists had gone too far in lampooning deeply-held religious beliefs.

In my very first writing workshop, at the New York State Summer Writers’ Institute back in 2001, I heard the complaints of humor and satire writers who felt that no one in their workshops “got” what they were trying to do. In general, it seemed that humor and satire fared very badly in MFA programs, at least for adults. (At the VCFA program in Writing for Children and Young Adults that doesn’t seem to be the case, particularly if the humor is light-hearted, whimsical, and appropriate for child readers/listeners. In fact, there is even a scholarship award for humor.)

One problem with humor is that the line between funny and hurtful can be interpreted so differently. In April I’m writing a piece for Disability in KidLit about the use of humor in writing about characters with Asperger’s/autism, and a lot of books — especially those written by people who don’t have Asperger’s or a family member with Asperger’s/autism — seem to “laugh at” rather than “laugh with.” 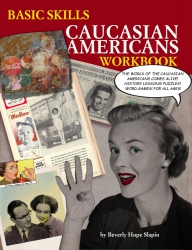 Still, humor is often a hard sell, especially as the readership gets older. I was reminded of this last night when I spoke with my friend Beverly Slapin about her send-up of white culture in Basic Skills: The Caucasian-American Workbook. Slapin, who is Caucasian American and has seen the culture change from the 1950s to the present, pokes fun at customs that have been accepted as “normal” over the years. Using the language of some highly-insensitive cross-cultural analyses of indigenous peoples, she explores aspects of Caucasian-American life. I was laughing out loud on the bus from New York City to Albany, to the consternation of my fellow passengers.

Unfortunately, no one else seemed to “get” the humor. My review for the “Waging Peace” column of the Albany Times-Union happened to be the only review this small-press-published book received. One of the people who commented, Mark, was offended, but his post led to a healthy dialogue about satire and humor.

One of the great things about reviewing for “Waging Peace” — and the reason I intend to continue even though I no longer live in Albany — is that we do get a dialogue going in the comments. A couple of years ago, Beverly started a website, De Colores, to review books about Latin America and [email protected] She expressed concern that her reviews, while widely read and respected, didn’t generate the kind of comments and dialogue she wanted to create with the site. I told her that few review sites generate comments, and when they do, it’s of the “Thank you! I look forward to reading this book” variety. Authors, in particular, are urged never to comment on a negative review, no matter how wrong-headed they believe the reviewer to be. (Beverly, by the way, was delighted that one author didn’t take that advice.)

Not only did Beverly use a lot of humor and satire in Basic Skills: The Caucasian-American Workbook, she does it as well in some of her reviews, along with detailed analysis. I wish more people would use the comment space under the reviews as an opportunity to discuss both the points of the review and the use of humor in them. Perhaps if we had more open dialogue about the meaning and appropriateness of humor — whether it be book reviews, cartoons, or satiric essays — there would be less violence. There is a saying that the antidote to free speech isn’t censorship, but more free speech.