Categories Menu
Home » Blog » #WeNeedDiverseBooks Incorporates, Is in for the Long Haul

#WeNeedDiverseBooks Incorporates, Is in for the Long Haul

I got the news yesterday that We Need Diverse Books has filed as a 501 (c) (3) nonprofit, turning what was once an ad hoc response to the lack of diversity at a major publishing industry event into a concrete and ongoing presence. Incorporating as a nonprofit will allow the organization, led by founder and president Ellen Oh and advisory board members Matt de la Peña, Cynthia Leitich Smith, Grace Lin, Cindy Pon, and Jacqueline Woodson, to apply for grants, solicit donations, and carry out large-scale initiatives such as a Diversity Festival in Washington, DC scheduled for 2016. According to the We Need Diverse Books press release, the new nonprofit “plans to initiate a grant program to support diverse authors, bring Diversity into the Classroom with collaborations with First Book and the National Education Association, and develop a “diversity toolkit” for librarians and booksellers.” 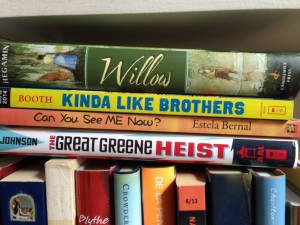 Some diverse books released in spring and summer 2014.

I applaud the organizers of the movement for taking this long-term approach. Because they can apply for government and private grants and solicit tax-deductible donations, nonprofits can turn wish lists into reality. My first publisher (and the publisher of Gringolandia), Curbstone Press, was a nonprofit that brought out many important and worthwhile books that the commercial publishers deemed unprofitable, including poetry, translations, and books for classroom use that were not instant bestsellers but have sold steadily over the years. I am also an active member of PEN American Center, a literary nonprofit that defends freedom of expression and supports writers living in precarious circumstances ranging from repressive governments to lack of health care.

Over the next months and years I hope to round up supporters for We Need Diverse Books and participate in their programs. I also have my own “wish list” for the organization. In 2013 I successfully proposed an author breakout session for the ALAN (Assembly on Literature for Adolescents of the National Council of Teachers of English) Workshop that turned out to be the only diversity-oriented session of the workshop. Unlike most of the other presenters (and all the presenters on the main stage), my panelists did not receive support from their publishers and thus came on their own nickel. This seems to be a problem for many authors of color, whether they’re published by major houses but not chosen for marketing support, or published by smaller presses that cannot afford to sponsor them. A travel grant would go a long way to making the speakers at the ALAN Workshop, one of the principal national showcases for YA authors, more representative of the students that ALAN’s members serve. 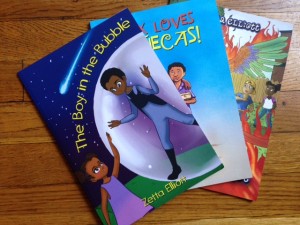 I would also like to see We Need Diverse Books support ALL authors of color, including those published by small presses and those who self-publish. Due to a history of exclusion in the publishing industry and successful models of independent publishing and non-traditional marketing, many writers of color — particularly African-American writers — see self-publishing as a first rather than a last option. And nearly half of the diverse books published each year by traditional publishers are the products of small presses. But there’s still a tendency for traditionally published authors to look down on self-published authors, and for authors published by major houses to look down on those published by small presses. If We Need Diverse Books only invites authors published by major houses to sit on panels or receive grant support and distribution through First Book, or if their curriculum guides only include books by major houses, this worthwhile nonprofit will replicate the divisiveness and exclusion practiced by the existing power structure. So, “wish list” #2: Provide guidance and support for those writers who have chosen to self-publish, including how-to panels and grants and resources to highlight exemplary self-published books. And “wish list” #3: Include small press books in your distribution initiatives and resource guides. 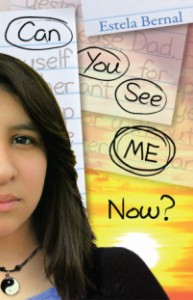 Finally, in keeping with Grace Lin’s excellent Cheat Sheet, here’s my latest small press entry, which I covered earlier this month for The Pirate Tree, Estela Bernal’s debut middle grade novel, Can You See Me Now? It is published by Piñata Books, the children’s imprint of the venerable nonprofit Latino publisher Arte Público Press: “Grieving for her father whose death she believes she caused, a 12-year-old discovers two other outcasts who also want to change their lives.”