In my Portuguese class last spring, we were required to read and report on one article a week from an online Brazilian news site. Unfortunately, the week of our first assignment was that of the deadly nightclub fire in Rio Grande do Sul, so all the news that class members brought in was bad news. The Brazilian professor didn’t extend the assignment beyond the first two weeks, which I believe had to do with the overwhelming tragedy of the situation in her native country.

This semester she tried again, and the due date happened to be two days after the country’s most prominent bass player committed suicide. Well, yes, there was other news as well — a major diplomatic dispute because the U.S. government had been caught spying with impunity on the Brazilian government, and the new iPhone being made available throughout the world but not in Brazil. However, as a writer, I found compelling the struggles of the musician Champignon, who started his career as a 12-year-old rock prodigy in 1992, who had a love-hate relationship with his superstar mentor, the band’s lead singer who died of a drug overdose last march, and who became despondent because of overwhelmingly negative reviews when he tried to carry on the band after the singer’s death.

Still, I felt bad bringing in such a sad story, one that many people would call a “train wreck.” As writers, though, we traffic in train wrecks. Something bad has to happen to our characters — even better if that something is a result of our characters’ own frailties rather than a chance occurrence. In my MFA program at Vermont College of Fine Arts I heard the expression, “chase your character up a tree and then throw rocks at him,” and the corollary that the rock-throwing couldn’t be random. Our protagonists had to end up in dire circumstances that were believable and logical outcomes of his or her actions, and sufficiently dire  that the reader could not be sure of the outcome. I remember Maggie Steifvater saying at a conference that she “tortures” her characters. My professors at VCFA would nod in approval. 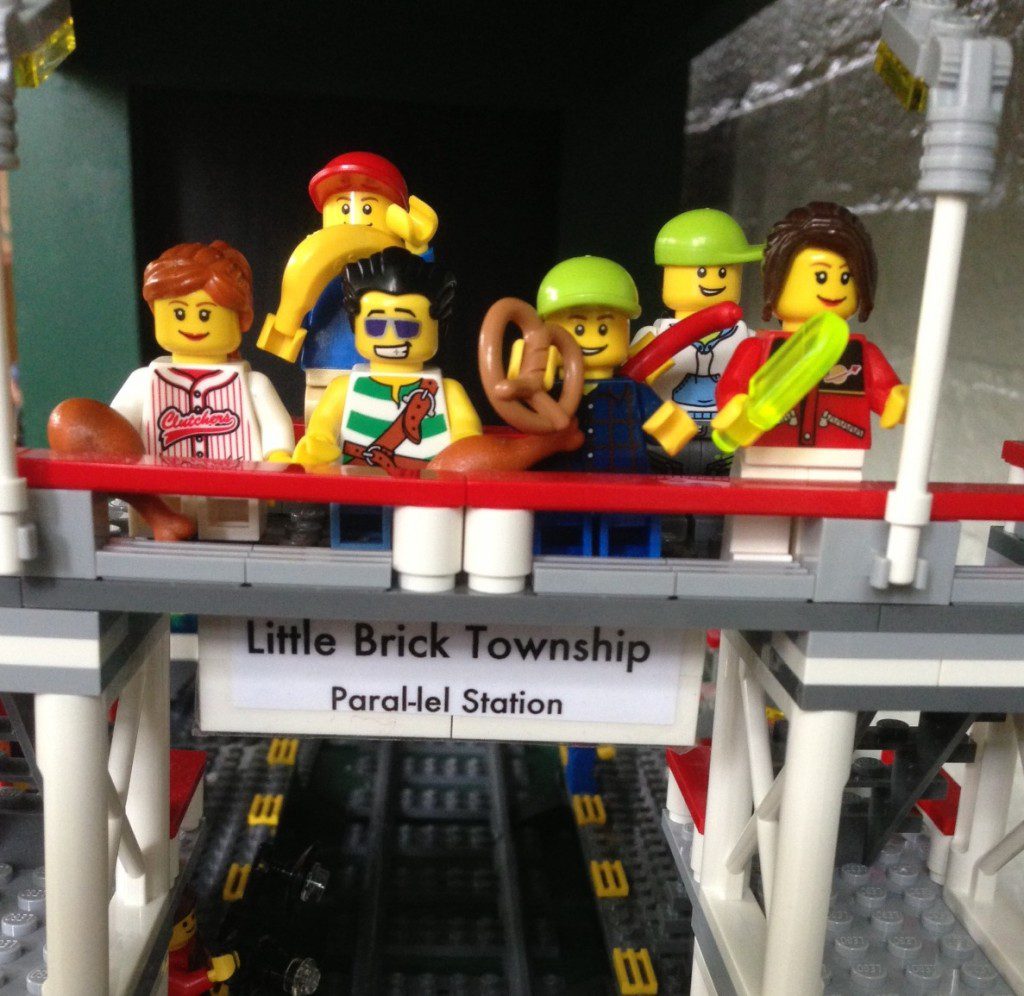 These Bricksters get together to watch train wrecks. Jerry Bijoux (rear, with the red hat) will drop his banana peel on the tracks to help things along.

Most commonly, fictional “train wrecks” — both train-wreck circumstances and train-wreck characters — are deadly serious, whether they’re contemporary fiction, historical fiction, or speculative fiction. Some authors use them for humorous effect, most notably Lemony Snicket in his Series of Unfortunate Events. The popular YA dystopian genre is probably the most bad-news genre of all, but as young readers mature, we writers ramp up the stakes, the conflicts, and the physical and emotional danger. This is what readers want, we hear, and we tell ourselves. But let’s face it. This is what we like to write. If it wasn’t, we’d be writing…well, I don’t know what other people would be writing, but I’d be writing computer code (and it wouldn’t be for Grand Theft Auto V).

Yesterday I read an article in the New York Times titled “‘Everyday Sadists’ Among Us.” The article talked about people “who enjoy inflicting at least moderate pain on others, directly or vicariously” and included not only obvious bullies but also those who play violent video games and revel in schadenfreude or others’ suffering in general. In other words, people who watch train wrecks, particularly if they play a role in bringing about the train wreck.

Could this be…me? The article didn’t mention fiction writers — or readers for that matter — but I’m not sure we get a pass because we torment our characters by writing words and sentences rather than by pressing buttons on a controller. Or that we enjoy reading about other people’s tragic lives as opposed to applauding fights and body checks at hockey games.

What do you think?