Three Japanese Restaurants Off the Beaten Path: A Guest Post by Richard Lachmann

Visitors to this site may notice that my blog has not been updated as frequently as usual. I’ve been rushing to meet a revision deadline on SURVIVING SANTIAGO, and, as usually happens with these sorts of things, experienced a few last-minute mishaps, including a desperate call to sub in my Mostly Folk World Tour on WRPI (at least the show got fan calls!) and a computer virus. Tonight, though, I finished the revision, approved all the comments that had piled up (sorry, guys!), and sent over some photos to accompany my husband’s latest international restaurant reviews. 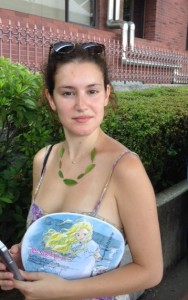 World traveler Maddy with her new “necklace,” waiting for a tour boat.

Last month, Richard was invited to give talks in Shanghai and Beijing, and although I could not accompany him because of my work as a graduate assistant at the VCFA residency — my daughter, Maddy, took my place — son Derrick and I met them in Tokyo for a week and a half there and in Kyoto. Along with sightseeing at Buddhist temples, the Edo-Tokyo museum, and on the city’s rivers, we ate at a variety of Japanese and fusion restaurants. Because of thorough coverage of Japan’s restaurants in various guides for tourists and foodies, Richard hadn’t intended to provide the kind of restaurant reviews that have been popular on this site for travelers to Lisbon. However, his favorite places haven’t received the kind of coverage they deserve, and just as I try to focus on outstanding children’s and young adult books from smaller publishers in my reviews for The Pirate Tree, he decided to write up these smaller, out-of-the way restaurants, which are not in the heavily traveled areas but in unassuming houses or apartment buildings on quiet residential streets. 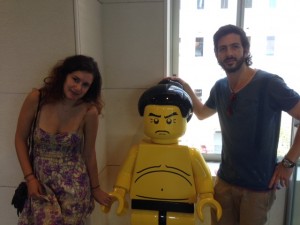 Maddy and Derrick helped us to check out restaurants off the beaten track.

“Japan is best known for sushi. The expansion of the Michelin guide to Tokyo, which immediately had more restaurants with stars than any other city in the world, and the celebrity attention drawn to Jiro Ono by the documentary Jiro Dreams of Sushi, has focused attention on this one variety of cuisine. When we were in Japan we didn’t eat at enough sushi restaurants, and we ate at each one only once, so I don’t feel we have anything to add to the numerous guides and blog entries.

Instead, I want to highlight three excellent fusion restaurants, none of which are mentioned in the Michelin guide. (As a side note, the Michelin has encountered more criticism for its ratings in Japan than anywhere else in the world, with numerous Japanese journalists and bloggers derided Michelin for ignoring great restaurants and overrating others.)

Hortensia (NS Azabu-Juban Building B1F, 3-6-2 Azabu-Juban, Minato-ku, Tokyo; (81-3) phone: 5419-8455; lahortensia.com) is outstanding in the skill with which its dishes are prepared and served and in the imagination of the chef. While mainly French in conception and presentation, the ingredients are mainly Japanese and the sauces and combinations have a strong Japanese element. The fixed menu, which includes an amuse bouche, 2 appetizers, 2 mains and a dessert, is a bargain at 88,000 yen. (There also is a 138,000 yen menu which has the same number of dishes but utilizes more high priced ingredients.) The wine list is mainly French, with no sake, and is overpriced. Mot bottles are 50-100% higher than in New York. 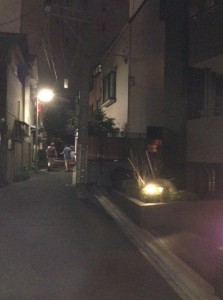 Giro Giro’s Kyoto restaurant is on a quiet neighborhood street.

Giro Giro Kagurazaka (5-30 Kagurazaka, Shinjuku-ku, Tokyo; phone: 03-3269-8010). Customers sit at a counter surrounding the chefs’ workspace, in the style of Joel Robuchon. A set menu of unique and imaginative dishes is served. The chefs are especially skilled with custards that are key elements in many of the dishes and in their ability to extract the maximum flavor from the wonderful vegetables they use. Our favorite was a fried eel sandwich on crustless white break with an edamame spread that pulled together the eel and other ingredients in the sandwich. The chefs were extremely personable and interacted with us despite their minimal English and our total inability to speak Japanese.

Giro Giro has sister restaurants in Paris, Honolulu and Kyoto. We ate at the Kyoto restaurant, which had a totally different menu than what we were served in Tokyo three days later. 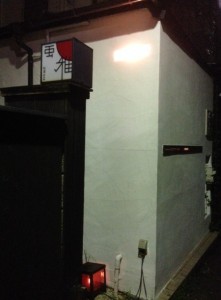 Giro Giro Hitoshina (420-7 Nambacho Nishikiyamachidori Matsubara Sagaru, Shimogyo-ku, Kyoto, Kyoto Prefecture 600-8027, Japan phone: 81 75-343-7070). The chefs in Kyoto focused their menu on fish. Most dishes featured a single fish prepared in 3 or 4 ways, giving us the opportunity to taste different textures and flavors, all drawn out of the same fish. Like their colleagues n Tokyo, they were highly skilled with vegetables, and also extremely personable.   At both restaurants, try to get seats at the counter rather than at tables in the upstairs dining rooms. Interacting with the chefs heightens the pleasure of the outstanding dishes and the chefs’ careful design of the tasting menus. The dishes link to one another and offer contrasts in interesting and provocative ways. The chefs also suggest different sakes for each dish, designing a sake tasting as we ate through the set menu. Sake prices were a bargain at both these restaurants and indeed everywhere we ate in Japan, even at high-end sushi restaurants. This is a dramatic contrast to New York and elsewhere in the U.S., where restaurants mark-up sake far more than they do wine.”