The #WeNeedDiverseBooks Panel at BookCon 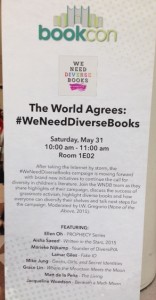 “You asked for it! We got it,” read the flyer I handed out at BookCon to announce the time and location of the #WeNeedDiverseBooks panel that was added to the program several weeks ago as a result of a coordinated social media campaign. (See my post on the campaign here.) By the time the event started, at 10 on a sunny Saturday morning, all the seats were filled and people were standing against the back and side walls. The panel, moderated by #WeNeedDiverseBooks co-organizer I. W. Gregorio, began with remarks by organizers Aisha Saeed, Marieke Nijkamp, and Ellen Oh on why they started the campaign and what they plan to do to keep it going.

Aisha spoke about the changing demographics of the United States, the fact that so-called minorities will soon be the majority — thus creating both a need and a growing market for books that reflect their cultures and experiences. Marieke’s presentation focused on young people with disabilities, including mental illness, who need books that present their experiences honestly, without falling back on stigmas and stereotypes. For those who have not thought of disability as an element of diversity, she pointed out that one in five children either has a disability or will acquire one later in life. 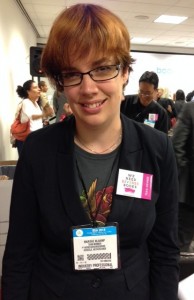 Ellen, cited by several panelists as the “force of nature” behind the campaign, promised continued activism on several fronts: helping authors of color break in through, for example, Lee & Low/Tu Books’ New Voices Awards; raising the profile of already-published diverse authors through a partnership with Read Across America; encouraging publishers to publish diverse books via market-based solutions (e.g. First Book promising to purchase 10,000 copies of multicultural picture books and donating them to families and schools in need); and keeping the campaign in the public eye through a Children’s Literature Diversity Festival planned for 2016 in Washington, D.C.

Following the organizers were five diverse authors who talked about the influence of multicultural books in their lives, their struggles breaking into publishing, kids’ reactions to their work, and why they joined the campaign. Lamar Giles is a personal friend of Ellen Oh’s and signed on as soon as she asked him. He talked about the preponderance of slavery (and historical fiction in general) in the books handed to him as a child, and said he longed for contemporary stories that reflected his own life. Today, he writes those stories, with a dash of humor that also characterized his presentation. For instance, when asked about people who would criticize him for getting involved in a campaign like this (because opponents of more diversity in children’s books have called us whiners, troublemakers, and worse), he said “haters gonna hate.” We need to ignore them and do what’s right for young readers.

On the same topic, Matt de la Peña was even more emphatic. He grew up as a non-reader — and a terrible student in general — because he didn’t see that the books out there were for him. Today, he does a lot of speaking in schools with students at risk — the kind of student he was — and said basically, “If you want kids to become ‘monsters’ in inner cities, don’t allow them to read books that offer honest representations of their lives.” He only became interested in reading and writing when he read Sandra Cisneros’s The House on Mango Street and Junot Diaz’s Drown and thought that, if they could write stories and get them published, so could he.

Mike Jung, who writes middle grade fiction and is active with the Society of Children’s Book Writers and Illustrators, cited a discussion with another SCBWI member as his impetus for getting involved in the #WeNeedDiverseBooks campaign. He talked about writing for his two sons as his first audience, though his characters, he said, are based on himself as a child. 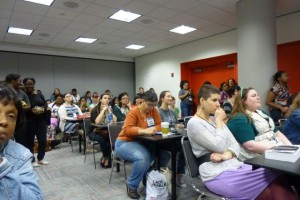 Award-winning picture book and middle grade author Grace Lin had a powerful message for people who say they don’t need diverse books because they and their schools and communities are all-white. She said (and this was my most tweeted quote from the session), “If non-minority kids don’t get diverse books, they will grow up with only stereotypes.” She also said that we need to talk about diverse books differently to get non-minority kids to embrace them. We need to focus on other aspects of the books besides ethnicity — these are adventure stories, for example, or stories about kids who solve mysteries. She promised a “cheat sheet” on the #WNDB website on how to promote diverse books to all young readers.

The authors’ part of the panel finished with Jacqueline Woodson, who, like her many award-winning books, emphasized the importance of stories with heart. She agreed with Grace that we should talk about the books in a different way, emphasizing their “heart,” their freshness, and how they explore the feelings we all have in common. She applauded the dialogue and reflection initiated by the #WeNeedDiverseBooks campaign and urged us to convince teachers (and anyone else who isn’t yet convinced) that diverse books are not “only” for people from that culture. We all need broader horizons and a deeper understanding of our world. 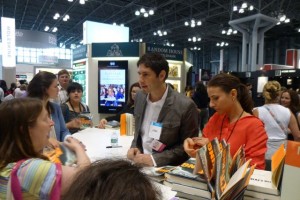 The panelists finished on an optimistic note — not hard to do, given the standing-room-only attendance in a fairly large room. They cited the growing Hispanic/Latino market, which is already generating interest from the film industry (which, as I’ve written in several earlier blog posts, is a welcome change as long as the filmmakers too don’t fall back on stereotypes). Mike praised those of us who have been involved for a long time, and I was glad to see that a new generation has taken on diversity in children’s literature as a cause worth pursuing.

The audio of the panel is now available here!

While the multicultural publishing panel in the afternoon had a smaller audience, it was just as useful — and important. Cheryl Willis Hudson of Just Us Books and John Byrd of Cinco Puntos Press talked about why they became publishers — Cheryl because she couldn’t find books with protagonists who looked like, and had lives like, her two children; and John, speaking for his parents Bobby and Lee, because they had talented writer friends who were not getting published by major houses and were thus not part of a literary conversation where they belonged.

Cheryl and Wade Hudson started as self-publishers, an experience that resonated with many in the audience who saw themselves shut out of mainstream publishing. In Cheryl’s words, they sought to “go to the people, not to the filters.” They soon found other authors with quality projects that could not get published — those were other diverse stories that had been “filtered out.” Today, they publish many authors who had formerly self-published, and other who were once published by large publishers. While their books portray black children, their publishing program offers a wider range of formats, genres, and subject matter than major houses, including classics of African-American children’s literature brought back into print, poetry collections, and stories and poems with political content. They see these varied books as for all children, not just African Americans.

John cited the authors who have found a home with Cinco Puntos and who have become part of the national literary conversation, with books for both adults and young readers, fiction, nonfiction, and poetry. Among the press’s best-selling and award-winning authors are Dagoberto Gilb, who writes for adults; storyteller Joe Hayes (in fact, I’ve heard Cinco Puntos called “the house that La Llorona built”); and Benjamin Alire Sáenz. Both he and Cheryl talked about their non-traditional ways of selling books that have a hard time getting into the chain bookstores — among them, showing up at community book festivals, selling in independent bookstores and places that aren’t known to sell books (but do), and making personal connections with teachers and schools in otherwise underserved areas. 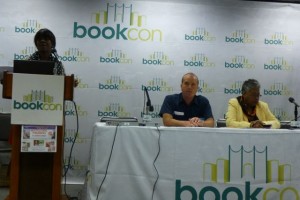 Both panelists reminded the audience that in our quest to get the major publishers to take on more diverse books, we cannot lose sight of the diverse books that are available today. Nearly half of those books, according to John, are published by small presses. And those small presses need our love. If it turns out that the major corporations don’t respond to the campaign, or if they support it until the “next big thing” comes along, the small presses need to be there, because publishers like Just Us Books and Cinco Puntos Press truly believe in diversity and are in it for the long haul.