The Uses and Misuses of Mentor Texts

Mentor texts. Until I started in the MFA program in Writing for Children and Young Adults at Vermont College of Fine Arts, I had no idea what these were. Then, in the first residency of this low-residency program the other “firsties” and I found out we were supposed to read 10-12 books a month and write critical essays on two or more of them in addition to our own creative projects. Why all that reading? Why all that writing about other books instead of our own?

The faculty advisors answered these questions. With each book we read, we were supposed go beyond “I liked the characters,” or “The storyline held my interest,” to the techniques authors used to draw us into the stories, keep us engaged, and make sure we didn’t forget them after reaching the end. How does an author make a protagonist likable? Where does an author place the major turning points and key decision points so the story doesn’t drag or feel abrupt? Each one of the books we read became a mentor text, a guide to our own projects. Through reading dozens of books, we identified the advantages and disadvantages of different points of view, noted techniques we could imitate, and pitfalls to avoid. In past blog posts, I’ve talked about some of these — my admiration for books that presented a collective protagonist, inspiring me to try this for my YA historical novel; my disappointment with novels that resolved a seemingly hopeless situation with a deus ex machina; and how to present contested histories in fiction. When I started my first verse novel, I read at least dozens of verse novels written for young people to see how each of them uses visual imagery and musicality, white space, metaphors, alliteration, wordplay, formal poetry, and other techniques to represent the narrative voice(s) and present the story.

While I’ve eagerly embraced mentor texts as examples to follow or avoid since my time at VCFA, I must admit that I’ve often misused them as well. I say “misused” rather than “abused,” as I define the abuse of mentor texts as something closer to the action of #copypastecris, someone who plagiarized large chunks of romance novels she admired as a shortcut to “creating” her own work. When it comes to the stories into which we put our hearts, and characters who we come to embrace as close friends and children, imitation via the lifting of entire plot lines and passages of text is not the sincerest form of flattery.

A misuse of a mentor text is different. It’s adopting a technique that may serve someone else’s story, but not yours. And as someone who reads a lot and appreciates when another author does something especially well, I’m prone in my excitement to want to do the same in my own works in progress. Two mentor texts, two works in progress, two examples. 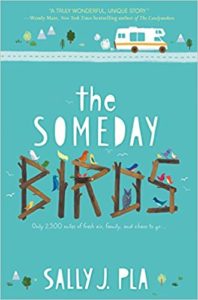 I’m a sucker for road-trip novels, particularly ones in which the protagonist learns and grows with each stop along the way, and one of the best I’ve read in recent years is Sally J. Pla’s middle grade novel The Someday Birds. Twelve-year-old Charlie is autistic and the second of four children. Their mother died years ago in an accident, and the children live with their father and grandmother, but their journalist father has been wounded in Afghanistan and is now in a rehabilitation hospital on the other side of the country. When their grandmother goes to be with their father, she leaves the children in the care of a family friend who drives the four children across the country to see the father. Along the way, Charlie is trying to spot birds — his connection to his bird-watching father — and believes that if he finds all of them, his father will recover. Each stop along the way leads Charlie to a different bird, insight about himself and those around him, and opportunities to make his way in the world with confidence.

I really liked this idea of “road trip stop = character growth” and sought to do the same for my YA historical novel. Unfortunately, my characters aren’t making a leisurely journey with ample detours to discover birds and themselves. Agents of a totalitarian State are closing in on them, and if they aren’t where they’re supposed to be at a certain hour, police will be notified. Self-discovery needed to happen on a much faster timeline than I had it happen in earlier drafts. By the time I queried the novel to agents, I’d already cut skinny-dipping in a lake and a winery tour. My new agent advised me to cut out an entire day and location, along with a wild boar attack (which used to be a bear attack until I found out bears were extinct in that part of the world). In all, what begins as a road trip turns out to be an escape, so the traditional road trip model ended up not working for my novel, and I have to come up with something new — perhaps something that will inspire another writer one day. 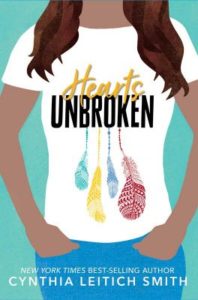 Another device I like in other novels is the love triangle, and particularly the girl torn between two boys. While I wasn’t a fan of Twilight for other reasons, I did weigh in on Team Peeta and Team Gale in The Hunger Games. At the heart of my verse novel in progress is my protagonist’s conflict between her loyalty to her old boyfriend and her attraction to a debonair new flame. As I was writing, I read Cynthia Leitich Smith’s Hearts Unbroken, in which protagonist Louise breaks up with her old football-playing boyfriend in a particularly heartless way (though the boyfriend kind of deserved it) and then goes out with her photographer for the school newspaper, who dumps her under almost similar circumstances to those that led to her breakup with the old boyfriend. I particularly appreciated the way Cynthia, who teaches at VCFA, reverses Louise’s relationship with the two boyfriends, how she is wronged and then reacts becomes the way she hurts someone else and then experiences the consequences in a familiar and hurtful way. This becomes the catalyst for her understanding herself and the way she treats the people closest to her.

Cynthia’s construction of the two relationships (which aren’t strictly a love triangle but serial romances) is brilliant, and I wanted to imitate it. Again, it didn’t work for my novel. In this case, it didn’t slow down the story, but the evolution of the relationship between Sónia and her second boyfriend seemed artificial, imposed by a structure I wanted to follow, rather than developing organically from the protagonist, her love interest, and their desires and needs. Many deleted poems later, I’m back on track, refocusing their relationship, and setting up the triangle not as one relationship an inverse of the other but as different aspects of Sónia’s desire to break free from the constraints of her life and from the society in which she lives.

Many authors say they don’t read because they don’t want to be influenced by other books. While I can see their point, I’m willing to take the risk because reading widely is the best way to develop and enrich one’s own work. When I became a client at the Storm Literary Agency, I received a packet of advice (one way I knew, as an autistic writer, that this was the right place for me), and in it was the admonition that we should spend 50% of our writing time reading. Yes, this may mean I spend another big percentage of my writing time revising where I’ve taken a wrong turn, but it’s a small price to pay for the opportunity to learn and grow in my craft.