The Tragic Tale of Lego Piggy: Point of View

Being trapped at home following a snowstorm has made me nostalgic for those October days when the only thing I had to clear was fallen leaves from my yard. My LEGOctober series turned out to be quite popular as well, so this month I’ve extended the series of writing advice through LEGO with “The Thanksgivukkah Advent Calendar Challenge: Juxtaposition and a Writing Prompt,” and now “The Tragic Tale of Lego Piggy.” 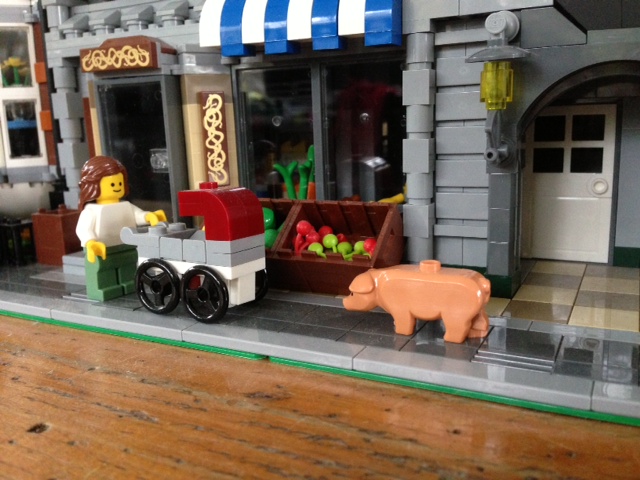 “So I was out with the baby picking up a few things at the Green Market, and this pig walks up…” 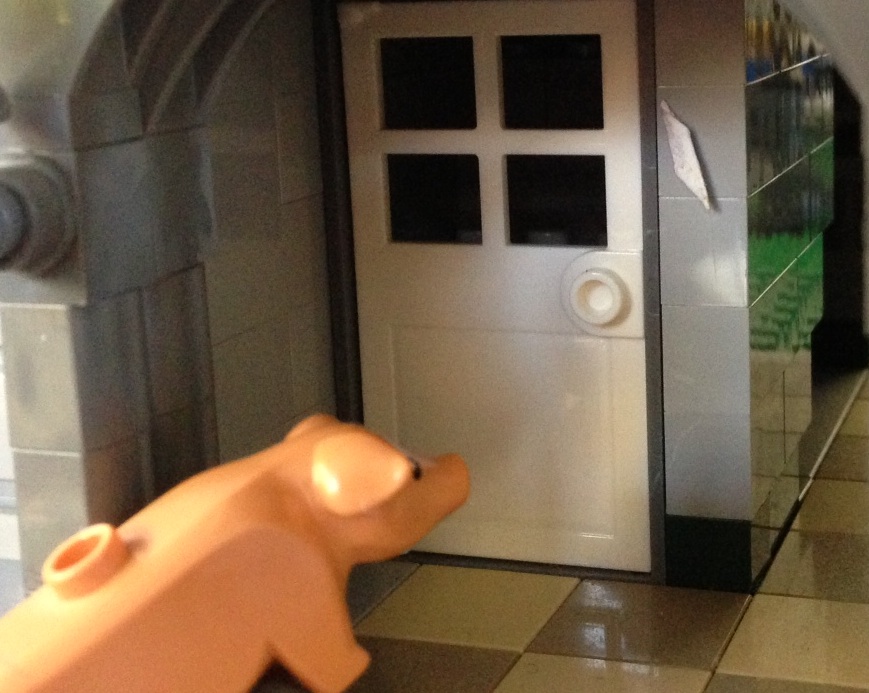 “it must have seen the mezuzah on the door and thought it would be safe.” 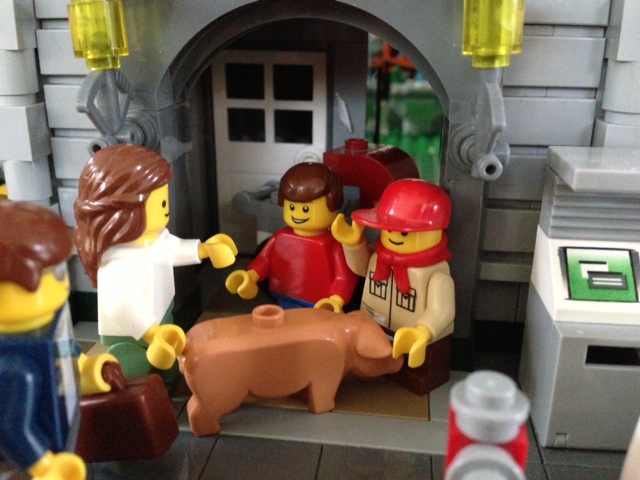 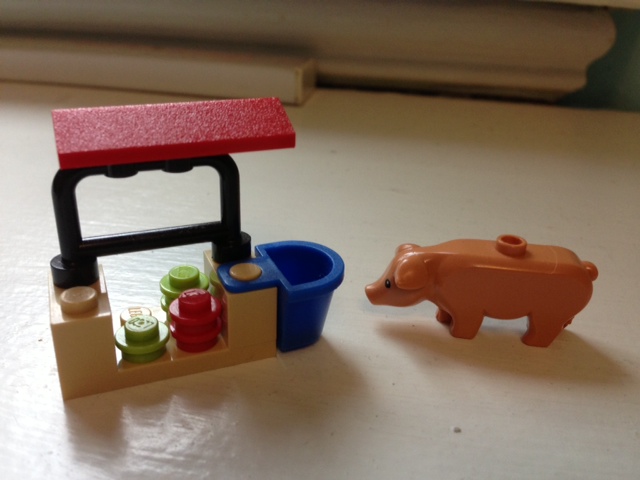 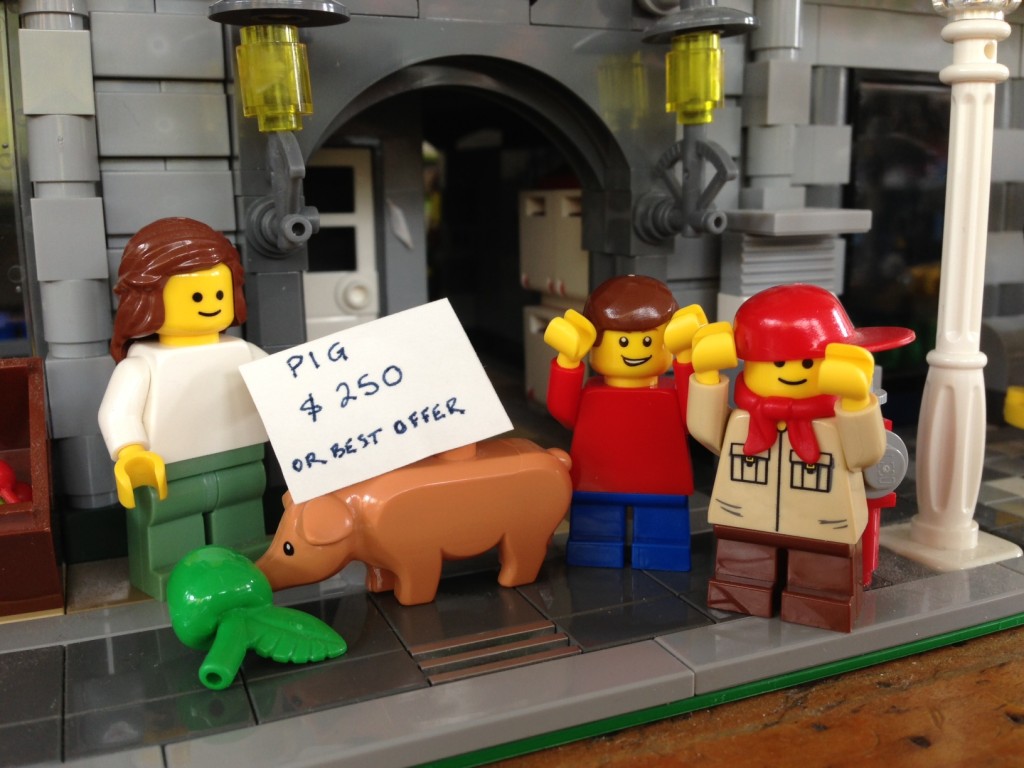 The decision on point of view centers on the question: “Whose story is this?” While the title mentions the pig, ultimately the story belongs to Mom. She sees the pig, she speculates on why the pig may have followed her (guessing that because the family is Jewish and has a mezuzah on the door in keeping with Jewish custom they also keep Kosher and thus will not eat pork), and she decides whether or not the family will keep the pig as her children in typical fashion have begged her to do. Mom experiences and resolves a conflict in the way that she thinks is best for her family. The pig, sadly, is a passive character and ultimately a victim. Even its thoughts are filtered through Mom. Pigs are intelligent animals, but in the real world they do not have the ability to predict their long-term fate or comprehend a religious symbol that may indicate what that fate might be. (My apologies to writers and readers of talking animal stories.)

Once the decision has been made as to whose story this is, and through whose eyes we experience the story, we have to decide on how close the point of view is. The closest is first person, when we read the story in the character’s own words. Were I to take the quotes off what Mom says in the first two frames but leave them for the dialogue between her and her children, it would be a first person story from Mom’s point of view. My photos, then, would not show Mom but only what Mom sees: the pig, her family, the streets and buildings of Little Brick Township. However, I’ve chosen to narrate the story in third person, where we see all the characters from the outside, both through the narrator and through the lens of the camera. Yet, it’s a close third person because we are also let into the thoughts of our main character, Mom, as she speculates on the pig’s motivation for following her (in that frame, we see the pig as Mom imagines the pig stopping by her house; if Mom actually saw the pig stop, the picture would be of Mom standing behind the pig) and as she imagines preparing the animal to sell to someone who does not keep Kosher (again, seeing the pig in Mom’s mind). 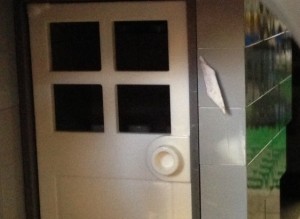 When Mom guesses at the pig’s thoughts, she tells its story as an outside (third-person) narrator. If this story were from Lego Piggy’s point of view, here’s how the scene with the mezuzah would have looked.

But it isn’t Lego Piggy’s story. Because it isn’t — because Lego Piggy does not control its own fate in the story — things don’t work out very well for it in the end.

You may have to write your story multiple times before discovering whose story it is and how close you need to get to your main character — narrating everything from his or her first-person point of view, or zooming in and out via a third-person narrator.

For a much more detailed explanation of the concept of point of view (but minus the cute LEGO pictures), see David Jauss’s essay, “From Long Shots to X-Rays: Distance and Point of View in Fiction,” from the volume he edited titled Alone with All That Could Happen: Rethinking Conventional Wisdom About the Craft of Fiction Writing (Writers Digest Books, 2008).