Categories Menu
Home » Blog » The “Shoulds” and Being Yourself

The “Shoulds” and Being Yourself

When I was in middle and high school, I wanted to be popular, more than anything else in the world. However, my weak social skills rendered that goal pretty much unattainable. With the exception of a brief period in high school when I unwittingly served as their drug courier, the popular kids acted as if I didn’t exist. Whatever efforts I made to put myself on their radar usually ended in complete humiliation for me.

In sixth grade, one of the popular girls told me that if I cut my hair short, I’d have a better chance of getting into the popular crowd because short hair was coming into fashion. So I begged and pleaded until my mother let me get my hair cut short — real short, like a boy’s. I showed up to school the next day, ready to take my place at the pinnacle of the social order…and all the kids laughed at me. I was the only girl who had short hair. Several months later, the popular girls told all the girls to wear their hair in two pigtails. Well, short hair doesn’t grow out that fast, but I did my best and showed up to school with two stubby pigtails. More laughter. In science class that day, a popular girl said she felt sorry for me and wanted to give me advice. She told me to stop trying so hard to be popular, that I shouldn’t do what everyone else was doing, but be myself. 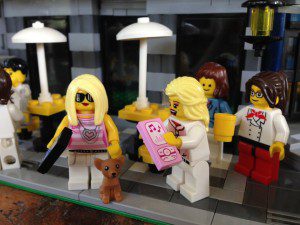 Trendsetter comes to town and tells Karlijn she’s not as cool as she thinks.

I often think about that advice, now that I find myself in a field where popularity is so important, and all the relationships and pecking orders of middle and high school still exist in full force. As writers, we have to handle our own marketing. We’re told to get on social media and to catch the eye of influential authors and gatekeepers. In an ideal world, our writing and storytelling abilities would speak for themselves, but in that same ideal world, the students who study the hardest would get the best grades and not have to walk through school in fear of getting harassed, humiliated, or physically injured by bullies.

In recent days, I decided to unfollow some popular authors on Instagram. I don’t have anything against these writers. In fact, I know a couple of them personally, and they’re nice people. But their photos are blurry (one of my Insta-pet-peeves), there are a lot of photos (I usually restrict my output to one a day to avoid clogging people’s feeds), and I don’t want to see their personal lives any more than they want to see mine. None of them has chosen to follow me, which tells me they have no interest in Lego photos and they don’t think I’m popular enough to follow absent a Lego obsession.

And guess what? I’m happier with my social media activities. I’m not trying to be popular or doing things I hate but “should” do to be popular (and then discovering that the popular people don’t know I exist). I’m picking up followers who are other Lego fanatics — I’m enjoying their work, they’re liking mine, and I’m learning new techniques to tell stories with Lego minifigures. Maybe some of these Lego fans will also become fans of my novels, or maybe I’ll develop new ways of telling stories that combine different media. Time will tell. But in the meantime, I’ve learned a lesson in the importance of being myself.