The Republic of Cruelty

Thank you to all the people who took part in #KidLitCares to aid the people impacted by Hurricane Harvey. Along with the many first responders, volunteer rescuers, and neighbors helping neighbors, you showed the best of this country.

It appears that we will be called on again to show our best. Along with the recurring natural disasters — wildfires in the West and the second most powerful hurricane to form in the Atlantic Ocean — we have another kind of disaster. On Tuesday, September 5, just as people in Texas are returning to water-damaged homes and people in Florida and the Southeast are preparing for another major hurricane — the U.S. Attorney General, with the blessing of the President, announced the end of DACA, the program to protect young people brought to the country as undocumented children or whose documentation expired when they were too young to do anything about it. Since 2011, these young people, known as Dreamers, have been able to attend school, work, and join the military, paying an annual fee to renew their temporary legal status in the hope that Congress will pass a law to make it permanent. They are the best and the brightest — highly educated, hard-working, committed to the country where they grew up, the only country they know. One DACA recipient, Alonso Guillen, lost his life rescuing stranded people in Houston. 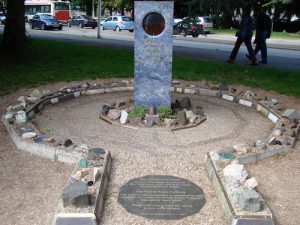 The World Peace Flame at the International Court of Justice, on the day Radovan Karadžić was brought in.

While telling Congress to pass a law protecting the DACA recipients (which he has also promised to veto), the President and his spokespeople are also telling the young immigrants to get their affairs in order and prepare to leave. Let’s take a minute to process this. The leader of our country intends to expel 800,000 people who are currently working or in school.

If this happened in another country — say in the former Yugoslavia — we would call it ethnic cleansing. The United Nations would pass a resolution condemning it and perhaps send in the peacekeepers — though too little, too late. Other countries would impose economic sanctions, or there would be an informal but growing international boycott. The International Court of Justice would indict the country’s leaders. (In fact, when I visited The Hague in 2008, I was unable to enter the building because that was the day they brought the recently captured Bosnian Serb politician Radovan Karadžić to answer for his crimes.)

Europe is currently experiencing a refugee crisis, with a million Syrians in camps or in the process of resettlement. Expelling the DACA recipients would create a crisis of similar magnitude. Mexico, where approximately 600,000 trace their origins, is straining under the burden of resettling refugees from Guatemala, Honduras, El Salvador, and Venezuela. While the DACA recipients are highly educated and skilled, Mexico has never faced the integration of so many such immigrants before. After the 1973 military coup, approximately 3,000 educated and skilled Chileans received political asylum in Mexico. Multiply that number by 200, and that’s the impact of this wave of forced political exiles.

The U.S. government has just precipitated a humanitarian crisis, and the whole world is watching.

Why do this? Some have cited spite — Trump’s effort to roll back every achievement of a predecessor, Barack Obama, who he argued was not even born in the United States. His base, which has lost ground economically since the Reagan Administration, is looking to take out their despair on people of other races, nationalities, and religions who have done better than they have — the “deep story” described by sociologist Arlie Hochschild. 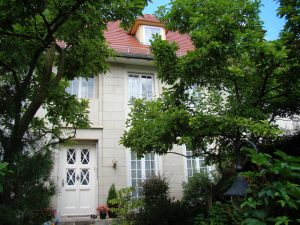 The home in Berlin where my husband’s father grew up. He left at age 18 after expulsion from the university. The house ended up in the hands of a loyal Nazi during the war.

I think the answer is more practical — and ominous in the long run. After ending DACA, Trump and his surrogates mentioned the high youth unemployment rate and promised that the jobs vacated by the Dreamers would go to “real” Americans. In other words, his administration promises to take the jobs (and university places) that the DACA recipients have earned through their abilities and hard work and give them to people from groups that he favors. (While Trump cited the high unemployment rate of African Americans, in this way pitting one threatened group against another, his policies in fact are designed to end Affirmative Action and protections against discrimination, and increase the incarceration rate. African Americans will NOT benefit from ending DACA.)

This is a culture of confiscation, not unlike the early years of Nazi Germany, when Hitler fired Jews from government positions and expelled them from the universities, giving their places to his “Aryan” supporters. My husband’s father was one of those expelled, at the age of 18 forced to leave the country to continue his education in safety. When the next economic crisis hits, who will be the next people deprived of their jobs, businesses, and property to reward Trump’s base and keep it growing? Trump has a long record of dispossessing people of their hard-earned property to build his real estate empire, and now his power is almost endless. 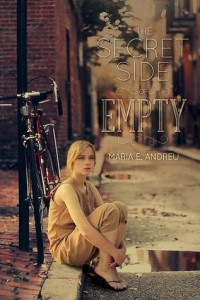 Unless we, as a people, draw the line. I’ve talked about the large-scale impact of ending DACA, but there are 800,000 human stories, all of them distinct. Author Maria Andreu arrived as a child, undocumented, from Argentina and Spain in the 1970s and lived in the shadows until the 1986 Immigration Reform and Control Act put her on a path to citizenship. Her childhood experience, updated with research and interviews, forms the basis of her award-winning novel The Secret Side of Empty, which portrays M.T., an undocumented high school senior originally from Argentina, whose life is becoming a dead end while the world is opening up to the rest of her classmates. Read this book, call your representatives, attend demonstrations, vote in the next election and every one after that. The cause of justice, human rights, and ultimately, rule of law in one of the oldest continuing democracies, depends on all of us.