In the five years we’ve lived on the border between the East Village and the Lower East Side, we’ve made regular visits to the Essex Market. Built during the Great Depression to bring the pushcart vendors indoors, the market persisted through the neighborhood’s change from mostly Jewish immigrants to predominantly Puerto Rican, Chinese, and now hipster residents. It survived the blow of urban renewal, when the city destroyed block after block of tenement buildings, leaving vacant land and parking lots at the base of the Williamsburg Bridge, as was the case with so many 1960s-era projects throughout the country. In 1995, the market downsized from two buildings on Essex St. to one, and retailers and food stands continued to struggle amid the arrival of well-heeled competitors on East Houston St. and the growth of e-commerce.

The new Essex Market is on the ground floor, with a multiplex theater and housing above.

After decades of political maneuvering, the Essex Crossing development rose above the parking lots and single-story buildings in the blocks north and south of Delancey St. and east of Essex. The city arranged for the Essex Market to move into a brand-new building on the southeast corner of Essex and Delancey, with the old markets and food stands, along with a handful of newcomers, on the ground floor and tables on the balcony, tucked into an otherwise “dead-dog” space, where the seating for the multiplex above slopes upward. This Phase I of the Essex Market opened in May 2019 with a promise of 30 more vendors in the basement Market Line later in the year. When we returned from Portugal in June, we became regulars at cheesmonger Formaggio, smoked-fish seller Nordic Preserves, baker Cafe D’Avignon, and prepared-food purveyors Peasant Stock, Ni Japanese Deli, and Zerza. Zerza, which specializes in Moroccan food, is new; the others were mainstays of the old Essex Market on the north side of Delancey St.

The shops and dining balcony 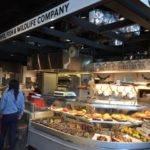 As we enjoyed the new market, we watched signs for the basement Market Line, which promised to open by the end of September. Since the ground floor market opened six months behind schedule, we weren’t optimistic. We expected to see the new food stands and stores sometime after the beginning of 2020. 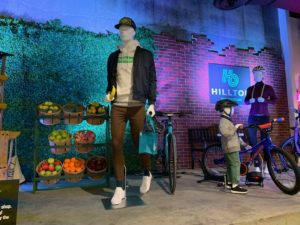 Along with food stands, the basement Market Line features a bike shop, with more stores on the way.

But last Friday, only six weeks late, the locked gates were opened and the Market Line served its first customers, Richard and me among them. We sampled dumplings at Nom Wah and Jerusalem artichokes at the Rustic Table Shuk. A new wine store featured free glasses of a tart Rosé. I texted our daughter photos of the new outpost of the Doughnut Plant and curry wurst from Schaller’s Sausage Bar, as she became a fan of curry wurst after our Family Heritage Trip to Berlin last year. The beer garden was too crowded, but I took a photo to show its popularity. The 30 new stores and restaurants are only the beginning for the Market Line. In the next few years, there will be more restaurants, clothing boutiques including the work of local designers, and the Lo-Line, an underground park at the base of the Williamsburg Bridge where mirrors provide light for a variety of plants. 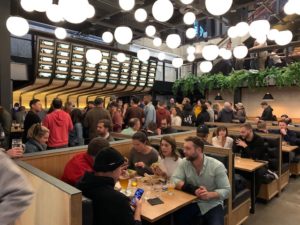 The Beer Garden was most crowded on the Market Line’s opening day.

As the holiday season approaches, New York City fills with tourists from around the world. The new Essex Market and Market Line offer many choices for hungry visitors along with photos that illustrate the history of this constantly changing neighborhood. Its location at the corner of Essex and Delancey Streets is a mere two blocks from one of my favorite New York City destinations for both residents and tourists — the NYC Tenement Museum. From there, one can take the M9 bus directly to the Financial District and the 9/11 Museum. It’s also a short walk to Chinatown and Little Italy, and a little farther on is the world-famous Soho shopping district. Come to my neighborhood for a visit; you won’t be disappointed! 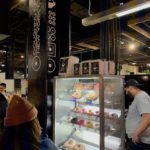 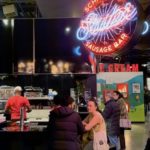 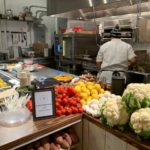