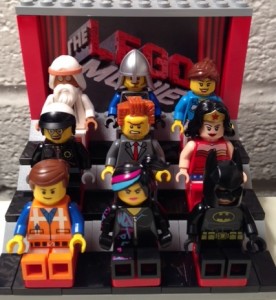 LEGO Movie characters, from a collector can sent by the studio, settle in for a screening. Lord Business is not happy that is view is blocked by Wyldstyle’s hair.

I didn’t have high hopes for The LEGO Movie. Lots of hype makes me suspicious, because I know the power of big money and how it can convince people that Astroturf is really grass. Besides, cool contraptions and flashy special effects often conceal a weak story line.

But my buddies on Instagram told me they’d seen the movie multiple times — and that was just on opening weekend. I had a couple of free passes from the studio, so I headed to the local multiplex on a frigid Monday afternoon. Most of my fellow audience members were parents with preschoolers and kids in morning kindergarten. 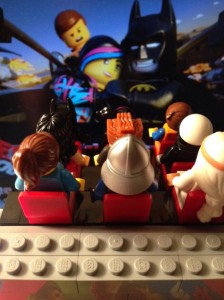 So the big Q: Did The LEGO Movie live up to the hype? For the most part, yes. Furthermore, the writing team and directors Phil Lord and Christopher Miller had the challenge of giving the movie appeal to a wide range of ages, from the young children sitting behind me (who laughed all the way through) to older elementary-age children, teens, and adults. They did this by offering a multi-layered story line: For the youngest viewers, bright colors, goofy contraptions, and nonstop action. For their older siblings, clever wordplay and cameo appearances from familiar historical and pop-culture figures, from Batman to Abraham Lincoln. For the teens, a sassy heroine and a romantic triangle. And for the adults, thought-provoking riffs on power and money, creativity, conformity, and control. 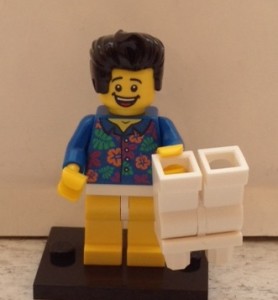 The “Where Are My Pants?” guy.

The unlikely hero of this movie, Emmet, believes in following the instructions. Like all of his co-workers on the construction site in Bricksburg, he watches the “Where Are My Pants?” guy on TV every night and sees President Business, the CEO who owns everything (including all the buildings and media) as a benevolent dictator. After all, he builds cool things and keeps people entertained. Yet President Business — who is known everywhere else by the feudalistic moniker of Lord Business — has a nefarious agenda to glue the world together so that the little LEGO people can no longer work, play, or potentially defy him. So far, Lord Business has managed to separate the worlds — modern cities, the Old West, medieval castles, a fantasy land called Cloud Cuckoo Palace — and isolate or imprison the Master Builders who threaten to bring them together and create what he sees as chaos. When Emmett finds the red Piece of Resistance that will shut off the KRAGLE (actually the top to a tube of KRAzy GLuE), he is hailed as the Master Builder destined to stop Lord Business. Lord Business unleashes his Bad Cop and Micro Managers on the baffled subversive and the ragtag band of rebels who protect him (and who quickly become disappointed in him and his abilities). 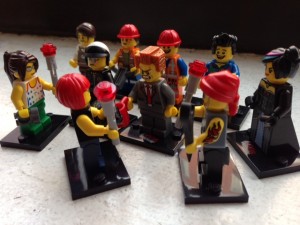 More LEGO Movie minifigures, along with some of my protestors from Little Brick Township. They’ve expropriated the missiles from some movie vehicles to make torches.

As someone who has also given personality and life to the yellow minifigures, I found the characters and their story engaging. The writers make the most of the minifig features, as, for instance, when Emmet’s head replaces the broken axle of an escaping wagon in the Old West. The story culminates in a surprise that breaks every rule of how one should end a story, but in doing so, it exposes a principal tension in the story: Are rules the enemy of creativity?

Much has been made of the “anti-corporate” bias of The LEGO Movie, particularly the bashing of Lord/President Business. It’s especially ironic since both LEGO and Warner are themselves giant multinational corporations. Yes, there is a self-critical element that is also played for laughs — the billboards extolling conformity, the herd-like obsession with “Where Are My Pants?”, the naivete of Bricksburg citizens who think President Business is giving them freebies for Taco Tuesday rather than gluing them to their baseplates. However, the movie does raise questions about too much power concentrated in the hands of a single person or corporation, as well as the inefficacy of resistance when the rebels are isolated individuals pursuing their own agendas. 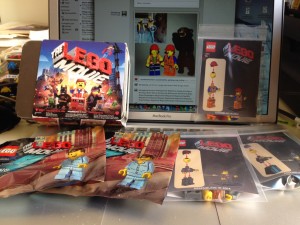 The movie swag from the studio. In the backdrop is my Instagram feed with one of @berryyeung’s creations.

Above all, though, this is a story that extols creativity. And while the creativity of the writers, directors, and actors make it entertaining, the movie has already launched a cottage industry of other creators as LEGO has done for nearly a century. On Instagram, LEGO photographers like the excellent @berryyeung reenact scenes with their own LEGO Movie minifigures. I have used various permutations of Lord Business to represent New Jersey governor Chris Christie and his Florida counterpart Rick Scott. My Pyjamas Emmet woke up this morning not in his Bricksburg apartment but in the Winter Village cottage with his grandfather reading the newspaper downstairs. Did Emmet wake up in the wrong place, or have I now given him a backstory? 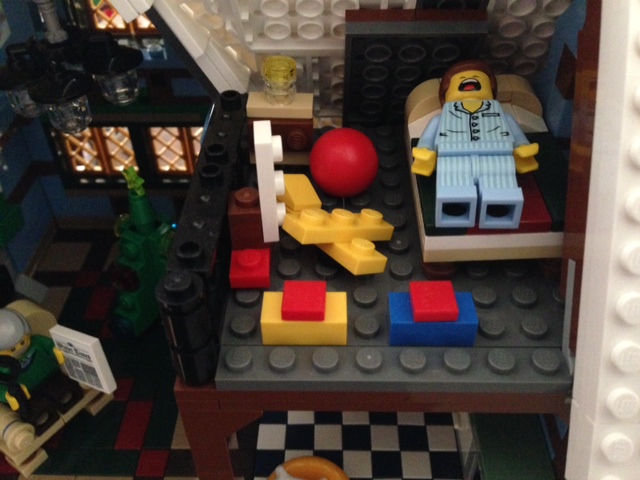 Emmet wakes up not in Bricksburg, but in Winter Village Cottage. Could this be his backstory?

When we view a movie or read a book and are then motivated to create our own versions of the story, or entirely different stories, creativity becomes a two-way street. We’re not just being fed entertainment, or made to follow the instruction book like the citizens of Bricksburg. We can expropriate the tools we’re given, like the bricks, plates, tiles, and minifigures, to critique or subvert the instructions and the stories — building our own models and contraptions, giving new roles to our minifigures, and having them act in ways that make us see those objects, and society, differently.

Now that you’ve read this far, it’s time for a giveaway. I have an extra pass to The Lego Movie (which is, unfortunately not valid for AMC theaters). I know you want it. Even if you’ve already seen the movie, you’ll want to see it again. I also have a polybag with Pyjamas Emmet. They gave these out at the movie theaters, but most of them are all gone. One lucky commenter will receive the pass and Pyjamas Emmet. If the winner is outside the U.S., the pass doesn’t work, so you will get Pyjamas Emmet and I’ll pick someone else for the pass. Contest ends at 11:59 p.m. ET on Sunday, February 16, and the winner will be announced on Monday. Comment away!