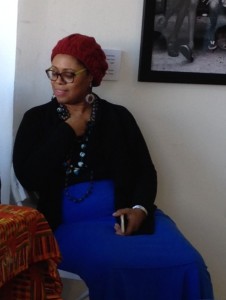 Ibi Zoboi curated the exhibit and organized this panel as part of the Brooklyn Blossoms Book Club.

This past weekend I had a difficult choice between joining a march in New York City to protest the recent police shootings of unarmed black men and attending a book event in Brooklyn to celebrate black girls and women. The book event was the second major public event of the Brooklyn Blossoms Book Club, organized by the Haitian-born writer and activist Ibi Zoboi. Ibi and I attended graduate school together at Vermont College of Fine Arts, and my friend Zetta Elliott was one of the four authors invited to speak. I am also familiar with the work of other three authors who spoke—Renee Watson, Tonya Cherie Hegamin, and Jacqueline Woodson. In August I reviewed Tonya’s historical novel, Willow, for The Pirate Tree, and last month Jackie Woodson won the National Book Award for her memoir-in-verse Brown Girl Dreaming. 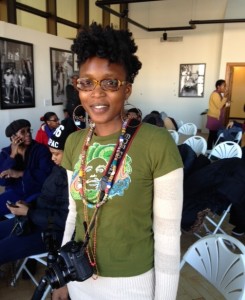 Photographer Delphine Fawundu, with photos in the background.

Before the event got under way, I saw an exhibit of photography by Delphine Fawundu—black-and-white photos of black girls in New York City, Haiti, Ghana, Nigeria, and South Africa. Fawundu spoke briefly about the photos, which she took over a period of 20 years. In them, the girls are jumping rope, doing schoolwork, helping with household chores and at the market, and enjoying the company of family and friends. She wanted to show positive images of black girls because those images don’t get the attention in mainstream media. For instance, the most recent media images of girls and women in West Africa are grisly photos of death from Ebola. And while Ebola is a serious and frightening illness, there are many more people, even in the most affected countries, who have not fallen ill and are going about their daily lives—the kind of lives depicted in the “I Am Here” exhibit. 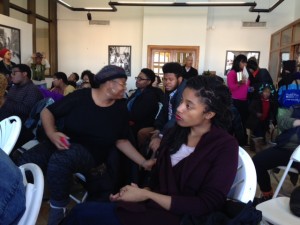 The event was well-attended, with many people standing and a busy book sale table.

The author panel attracted a full house, with every seat taken and many people having to stand. Independent bookstore Greenlight Books, located in Brooklyn’s Fort Greene neighborhood and specializing in culturally diverse children’s and young adult books, ran a busy sale table. The event began with three preteens from the Brooklyn Blossoms Book Club reading their favorite poems from Brown Girl Dreaming.

Each of the four authors read passages from their books, followed by questions first from the members of the book club and then from the audience. Jackie Woodson read three poems—one about leaving her Brooklyn classroom during the Pledge of Allegiance out of respect for her grandparents’ religious beliefs, one about an uncle who became a Black Muslim in prison, and one about the origins of her Bushwick neighborhood. 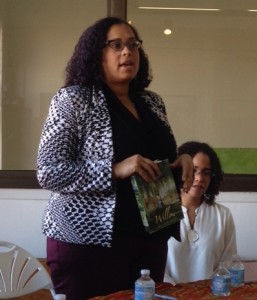 Renee Watson read from her middle grade novel What Momma Left Me, about a girl in middle school coming to terms with the violent death of her mother at the hands of her father. The passage featured the protagonist’s grandfather, a positive role for her and her brother who points out that brother Danny received a lot of material things from his father but didn’t get what he really needed.

Tonya Cherie Hegamin writes historical fiction and always wondered why some enslaved people stayed while others left. How do children get indoctrinated into believing freedom isn’t worth it? The passage she read from Willow describes that indoctrination, as Willow’s father, who supervises the other enslaved workers for master Rev Jeff, tells them that they enjoy better lives as slaves because free blacks have no guarantee of work and must provide for their own food and shelter. 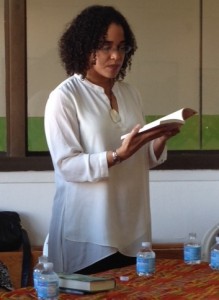 Zetta Elliott spoke about a girl she met on a school visit, a girl who got teased and felt ashamed of the fact that her father was in prison. Zetta told the girl that she has a brother who is incarcerated. That encounter inspired her to write a novel for early readers, An Angel for Mariqua, to connect with younger kids who have a close family member in prison. It’s a Christmas story, and in the passage Zetta read, Mariqua gets the gift of an angel from a holiday vendor but some older girls from the neighborhood accuse her of stealing it.

The girls from the book club asked a variety of questions, from the way the setting affects the plot of the story, to the inspiration for the authors’ works. Jackie Woodson said that her favorite experience as a child was moving from an all-black town near Greenville, South Carolina to Brooklyn, where she made friends from different cultures and learned about lives that were so different from hers. Zetta Elliott talked about her brother’s incarceration as the inspiration not only for An Angel for Mariqua but also for her award-winning debut picture book, Bird. She wanted her books to be age-appropriate for younger children who are experiencing traumatic events. When one of the girls asked Renee Watson if she experienced personally the family violence depicted in What Momma Left Me, she said she did not, but she did experience loss and grief as a child, and she benefited from the caring adults in her community. 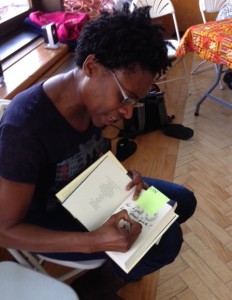 Several of the audience questions focused on the difficulty of getting published and the experience of rejection. Zetta Elliott is a prolific author and has chosen self-publishing for most of her books (Bird, A Wish After Midnight, and Ship of Souls were traditionally published). She finds it empowering to be able to publish books according to her schedule and not to go through a white filter on the content. The other authors have published traditionally, and in Jackie’s words, “If not us, then who?” She sits on the Board of Directors of We Need Diverse Books, which is pushing traditional publishers to include more authors and protagonists of color among the books they choose to make available. She discussed the successes of We Need Diverse Books, which includes a successful fundraising campaign that raised more than $300,000 toward paid internships for students of color seeking to become editors, travel grants for authors of color to attend and speak at conferences, awards for manuscripts and published books, and a national conference on diversity in children’s books slated for summer 2016 in Washington, DC.

While We Need Diverse Books gained visibility and influence through a social media campaign, the four authors warned against relying on “hashtag activism” alone. They said that meaningful change results from sustained efforts on many levels. For instance, they wanted to see more features related to books on radio stations that reach diverse audiences. This was a message I took to heart. My program on WRPI this evening included selections from Brown Girl Dreaming matched with songs from the civil rights movement and from other black artists singing about the power of stories, celebrating family, and following one’s dreams. 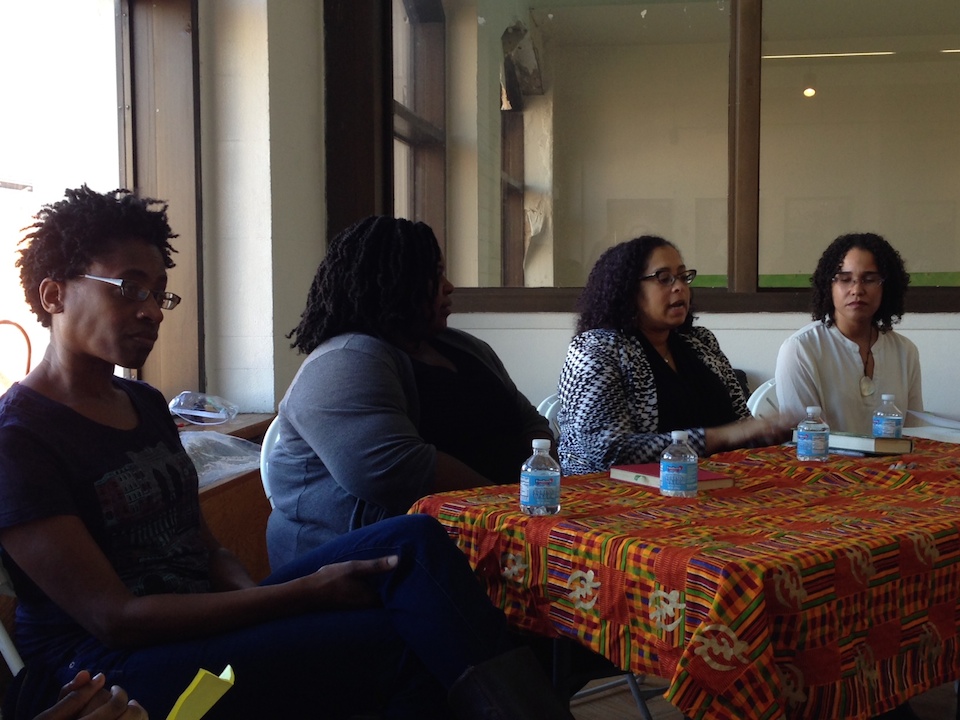