I’ve been a member of the Authors Guild for many years and last week attended the second of the organization’s series of Zoom events “Black Voices: Pushing for Change in Children’s Book Publishing.” While the first event featured agents and editors talking about the #PublishingPaidMe investigation of lesser advances given to Black authors among other business-related topics, the “Centering Black Creators” event that I attended was a discussion among authors and illustrators themselves. Along with moderator Kelly Starling Lyons and Authors Guild representative Cheryl Davis were illustrator Floyd Cooper and writers Judy Allen Dodson, Zetta Elliott, and Olugbemisola Rhuday-Perkovich.

The panelists displayed statistics related to the imbalance of publishing personnel, with Black editors only 1% of the total. What that means is too many books “about but not by” Black people, with the ratio currently in the range of 2-3 to 1. Seeing other write your stories is a disheartening feeling; others are taking Black stories with Black authors and illustrators cast aside. “Why are we not trusted to tell our own stories?” Lyons asked. Panelists recommended Kekla Magoon’s recent Horn Book article, “Our Modern Minstrelsy” to learn more about why white authorBlackCreators writing Black stories is a problem.

Elliott pointed out the need for major changes in the industry to make sure Black creators tell Black stories. It isn’t a matter of “a few rookies” working for publishing companies. New staffers generally have very little power, and many of them quickly leave the industry. The Black attrition rate at entry levels is very high because of an industry that isn’t committed to systemic change. Later on in the discussion, Lyons suggested hiring Black university professors, teachers, and librarians at the mid-career level as a way of jump-starting change. HBO and Disney are already starting to do this, and pulling in mid-career people brings in perspectives of people closer to the audience the publishers should attract.

In fact, publishers presently do a poor job of reaching out to the Black community. They see their audience as predominantly white and thus publish for the “white gaze.” That means too many nonfiction books about slavery and the civil rights movement that allow whites to congratulate themselves on progress made, and too many novels set in dysfunctional families in impoverished urban neighborhoods that reinforce white stereotypes of Black life and limit the imaginative range for Black children who want to see themselves exploring space and magical worlds.

Much of the discussion explored alternatives that exist but haven’t received enough attention. Among them are websites, festivals, and other ways of marketing books to Black readers. For more than 13 years The Brown Bookshelf has reviewed books, published guest posts and interviews by authors, and now has its own series of panels with Black authors talking about reforms in the wake of Black Lives Matter. Its new initiative, the Generations Book Club, organizes intergenerational reading groups, taking online in the age of Covid-19 the kind of live events that have been going on for years through local reading groups such as the Brooklyn Blossoms Book Club and book festivals such as the African American Children’s Book Fair of Philadelphia. Elliott talked about self-publishing as both an alternative and a potentially transformational challenge to the existing system and noted that Black websites, book clubs, and book fairs are but a few of the ways that independently published books can reach their audience. She pointed out that most of her income comes from school visits (now online), and her self-published books have given her an entry point into schools when the doors of traditional publishing were closed to her. “Don’t underestimate the power of your own voice,” she told listeners.

All of the panelists called on both book creators and readers to value authentic Black voices, and to make it a priority to get those into the hands of young readers. They, as well as allies in the publishing industry, have offered a new program beginning this month through the Authors Guild called “Office Hours.” It’s “an upcoming series of small group chats between agents, editors, and other industry professionals and Black children’s book writers and illustrators.” If you are a Black children’s book writer or illustrator, you can sign up here. If you’re an industry professional who would like to help out, your sign-up is here.

The panelists have provided a handout of advice and insights for Black creators, and those wishing to listen to the recording of the panel may do so here. The Authors Guild has put together a resource list here. 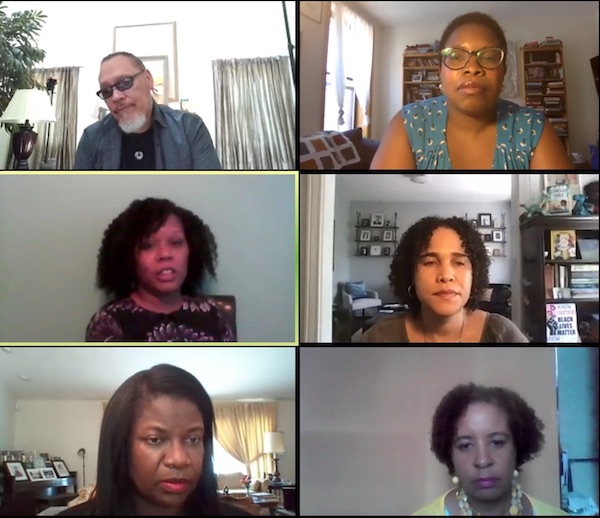