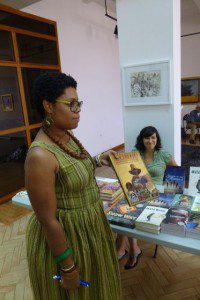 The founder of the Brooklyn Blossoms Book Club, Ibi Zoboi

I spent much of Labor Day weekend in New York City, where on Saturday I took the subway to Brooklyn’s Restoration Plaza for the first gathering of the Brooklyn Blossoms Book Club. The brainchild of mother, writer, and educator Ibi Zoboi, the book club brings mothers and daughters together to read and discuss books, take part in activities related to books, and meet the authors.

The debut meeting featured the award-winning author of fiction for children and teens Rita Williams-Garcia and celebrated the release of the second book in her series set in Brooklyn and Oakland, California in the late 1960s, P.S. Be Eleven. When I arrived for the three-hour event, parents were discussing the place of fiction in schools increasingly restricted in what they can teach by standardized testing, No Child Left Behind, and the Common Core Standards. Their daughters were on the other side of the room, writing letters as if they were the characters in Rita’s books. We could hear their delighted squeals and were glad they couldn’t hear us express 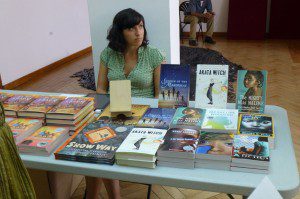 A selection of multicultural titles from Greenlight Books

our anxieties at an educational system that seems to devalue imagination, storytelling, and reading for fun, as well as a publishing industry that does not reflect, or offer books that reflect, the diversity of our nation’s young people.

Following the activities and discussion, Ibi and Rita led participants to a table of books for sale, set up by independent bookstore Greenlight Books. On that table were about a dozen books that featured female African-American and Latina protagonists. Ibi, who is a fan of fantasy and science fiction, booktalked her favorite titles, including Akata Witch by Nnedi Okorafor, Summer of the Mariposas by Guadalupe Garcia McCall, and Her Stories: African American Folk Tales, Fairy Tales, and True 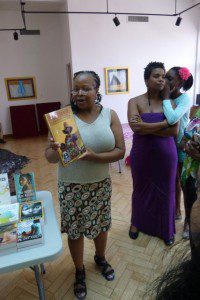 Rita Williams-Garcia talks about some of her favorite books

Tales by the late Virginia Hamilton. Then Rita took Her Stories from Ibi and after doing her own booktalk on this classic, chose some other favorites, such as Jacqueline Woodson’s picture book Show Way and novel Hush.

After the booktalks, participants were treated to a 1960s fashion show hosted by Tracy Chambers, who owns a vintage shop in the neighborhood. Rita then spoke about her strict mother, who would hear at church that someone had passed and offer to buy her clothes. As a result, Rita and her older sister wore clothes that had been out of date for decades. Rita’s desire for fashionable clothes led her to write and submit short stories for publication so that she could earn her own money and buy her own clothes. At the age of 14, she sold her first story for $150. However, she could only buy one outfit because her mother made her put most of the money away.

The final hour of the event was devoted to Rita’s reading from P.S. Be Eleven and Q & A from the audience. Most of the approximately 30 girls in attendance said they liked to write, and they had great questions for Rita. They asked about her writing process, how she did her research for these historical novels, and how much of her characterization was based on herself or on her siblings. There were so many questions from the young audience members that the adults barely had a chance to ask their questions before the book signing and time to go. 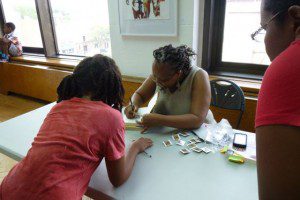 Rita Williams-Garcia signs her book for a young fan

This successful event will continue in Brooklyn one Saturday each month, and Ibi hopes to take her book club on the road as well. She sees the book clubs as a way of creating bonds between mothers and daughters, building a new generation of readers, and increasing the market for books about children of color. “Publishers want to know there are readers out there for these books,” Ibi said. If the empty sale table and the books going out the door in the hands of women and girls is any indication, the Brooklyn Blossoms Book Club is showing that yes, there are readers—and many future authors too! 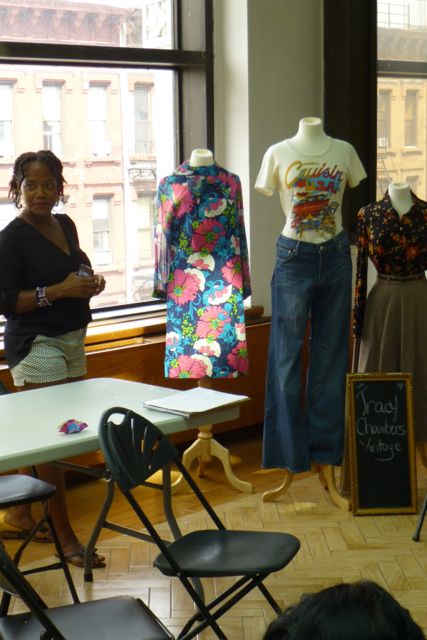