On a cold, drizzly day last week I took the express bus to Staten Island, my first time stopping in this lesser-known New York City borough rather than just passing through. I had been invited through PEN American Center and the Literacy for Incarcerated Teens (LIT) program to speak at Passages Academy, a group home for girls ages 12 to 18.

Before my arrival, the girls had read Rogue and written advice for Kiara to help her make and keep friends. They took a creative approach to the assignment, and the results were amazing! 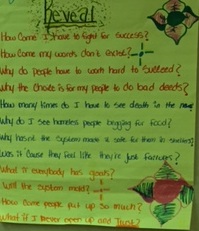 “Reveal,” Nigeria’s thoughtful and eloquent poem on the wall of the classroom.

Sixteen-year-old Nigeria wrote a play, a dialogue between Kiara and her father which takes place after she sees Chad screaming and pulling out his hair at the park. In this dialogue, she expresses her confusion and her desire to help Chad, but she also hides the fact that Chad’s distress has to do with his parents forcing him (and luring her) into their drug trade. Nigeria acted out the play with her teacher, Ms. Piccinonno, with Nigeria playing the role of the father and “Ms. Peachy” as Kiara. Below is an excerpt:

Kiara: Pop, I have a problem with Chad! I need help.

Pop: Yes dear, what about him do you need help with… (raises eyebrows, leans in close and smirks) You like him?

Kiara: (scrunches her nose. Looks like she is blushing). WHAT! No Pop, it’s just (looks concerned) well he acted crazy the other day in the park and I didn’t know what to do. I mean, what type of friend just sits there and watches their friend look crazy and doesn’t do anything?

Pop: Sweetie, it’s okay, you are a good friend for one. Also what do you mean acting crazy? Like how?

Kiara: (starts speaking at a faster pace) Well, he started to scream and was pulling his hair. I was shocked, Pop.

Pop: Well I see he has a problem there. (Grunts) I don’t know what type of problem he could have. He could be just plain crazy. (Shrugs shoulders.)

Kiara: Pop, I’m serious. He’s my friend and I want to be there for him. 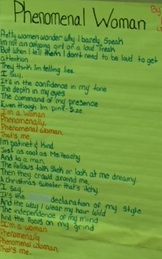 I love the way Nigeria captured Kiara’s stubborn desire to help as she comes to realize that having friends means being there for a friend and trying to understand what they’re going through. Her father wants to protect her –he initially advises her to step away without being aware of the depth of her concern, but as he hears more, he tells her to “Give it some time. He might not be ready to talk now; just give him time.” In this way, he supports her desire for friendship and leaves the door open for her to come to him with more questions.

Yeny, who is thirteen, chose one of the Mr. Internet questions:

Although this girl was at the last party, she didn’t tease me the way the others did. She was kind of nice to me, and I’d like her to be my friend. Should I go to her party, or should I say I’m busy (which I’m not)? I think the party might be fun and a place where I can make friends, but it might also be a trap like the last party was.

She wrote this poem in response:

The same girls that teased you gon’ be there

and they’re gonna tease you again.

She may not have teased you as much as the others but she still teased you in her own way.

You should stay home because you seem not to get along with these girls.

Why put yourself in that position?

In the future you should hang out with people who will support and accept you.

In the discussion, we talked about the meaning of the line, “she still teased you in her own way.” If the girl didn’t take a stand to stop the bullying, she was a bystander, one who in the end chose her friends (“birds of a feather”) over Kiara. She didn’t do the right thing.

Although Yeny’s response dissents from nearly all of the other responses I’ve received for that questions – see a typical one here – it was the course I chose when the same situation happened to me after a disastrous party in eighth grade where I ended up becoming the entertainment for the class bullies and a girl from that party (who I thought could become my friend because she was less mean than the others) invited me to a party at her house several months later. I stayed home the second time, and in high school eventually found a small collection of outsiders who became genuine friends. 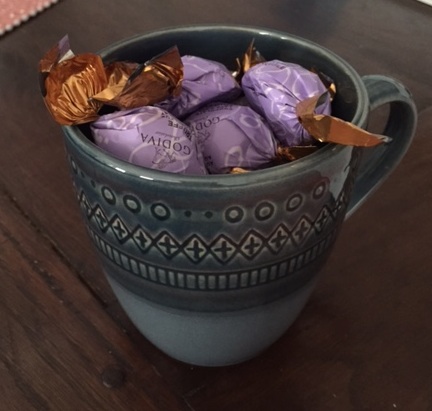 This lovely mug was filled with chocolate, but now I had to stuff paper into the bottom because I’ve eaten most of the candy.

The girls’ advice to Kiara and questions during the Q & A impressed me with their thoughtfulness and originality, and I appreciated the opportunity to share our experiences and our love of books. The girls are avid readers, and I left behind another activity as a follow-up, an advice column that, like the “Mr. Internet” activity, allows them to inhabit the pages of their books and interact with the characters. They’ve promised to send me what they come up with, and I’ve promised to include it on the blog.

After the presentation, the students, staff, and I shared pizza and chips, and I took home a lovely mug filled with chocolate. I look forward to returning to Passages Academy next year and presenting to a new group of girls on either Rogue or Surviving Santiago, which I left for the students to read. And if they choose to give advice to Tina, she probably won’t take it.

For anyone who wants to use it, here’s the “Advice Column” activity:

You’ve helped Kiara make new friends and get along better with other people. Now try out your new job as an advice columnist with the characters of your favorite books.

Who is the character that needs advice?

What is the character’s question?

How did the character’s decision work out? Did your advice help?