The 777 Challenge and a New Web Page

Technical difficulties and a conference presentation have prevented me from posting for the past week and a half. It was rather disconcerting to find myself inexplicably banned from my own site, but if you’re reading this, it means that my web guru and I have managed to resolve the problem. This also means that I am posting my 777 Challenge nearly a week after I promised to do so, but better late than never, right?

In any case, I’d like to thank the lovely and talented Robin Kirk for inviting me to take part in this challenge. Robin was a fellow student in the MFA program in Writing for Children and Young Adults at Vermont College of Fine Arts, and she is a passionate advocate for human rights. Her blog “Talking Rights” explores ways of teaching and writing about human rights, and she and her blog have inspired me to address these issues in my blog as well. 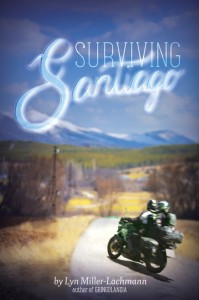 The 777 Challenge asks writers to post the first full seven lines of the seventh page of his or her work-in-progress, starting seven lines down. I decided to go with Surviving Santiago, since I consider it a work-in-progress until it’s actually published. (I also threw out the entire beginning of my latest work-in-progress, all 35 pages I’d written, because I plan to change the setting and still haven’t decided how old my protagonist is.) So here’s an excerpt from page 7 of Surviving Santiago. It takes place at the airport in Santiago, Chile in June 1989, where Tina has just landed and is getting hassled at customs because of her estranged father’s political activities against the dictatorship of Augusto Pinochet. She doesn’t even want to be there, but her father demanded visitation rights as part of the divorce settlement so her mother could get remarried in the United States.

…Daniel saw Papá get beaten and arrested in our apartment in Santiago while I was asleep. It’s not something my brother talks about, but before he left for college, his bedroom and mine shared a wall, and whenever he cranked up his music in the middle of the night, I knew he was thinking about it.

And when I think about what they did to Papá in that prison—torturing him so he’d name his sources and associates, beating him into a coma when he refused, sticking him into solitary confinement even though the left half of his body didn’t work … It’s like our whole family got twisted around this man with his military uniform, his gray mustache, and his pompous smile.

Following an awesome cover reveal on The El Space two weeks ago, I added a new website page for Surviving Santiago and invite you to check it out here. I’ll be updating the page with blurbs and reviews, and once the book is released on June 2, 2015, a Teacher’s Guide.