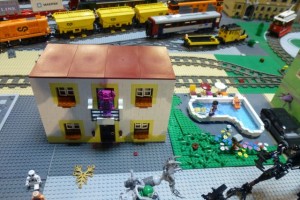 I missed the Mutant House the first time around. Note the minifigs in the pool. Can mutants and humans be friends?

In planning this year’s trip to Portugal, I wanted to arrive in time for the annual Lego Fan Event at the Campo Pequeno stadium in Lisbon, which ran this year from April 25 to May 3. I like to attend twice so that I can retake photos that don’t come out well or that I don’t notice on my first go-round. And this year it was easy to miss shots because on Friday when I went with Frederico, the 14-year-old son of my hosts, it was a national holiday and the exhibit was jam-packed with students like him. 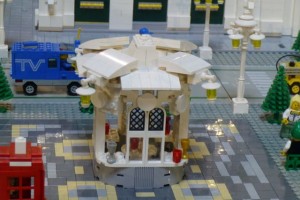 I’d looked forward to seeing Pedro Nascimento’s replica in Lego of the Paço de Terreiro, the historic square along the bank of the Rio Tejo (Tagus River), along with his scene of the Queen of England’s arrival. Sadly, the Lego Paço de Terreiro did not make its appearance, though Pedro was there with some of his other historic buildings in Lisbon, Sintra, and elsewhere. 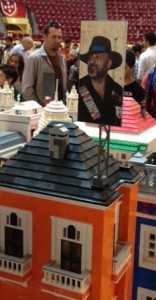 Pedro Nascimento’s image towers over his town. Will a giant Pedro statue be next?

These buildings have appeared at other public events, but I noticed some new touches – notably several billboards around town featuring Pedro dressed in the style of a military strongman. I didn’t ask him about the missing model – that is the equivalent of asking a writer how his/her book is coming along and when it’s going to be published. (Non-writers, or writers in countries where self-publishing is the norm, don’t understand that “when it’s going to be published” is pretty much out of our control, and a lot of factors can contribute to a book never being finished – just as a Lego building project of that scale likely depends on funding for time and materials.) However, I did ask Pedro if next year he planned to build a statue of himself in the town square and have his Lego citizens bow before him. Nonetheless, there were a number of outstanding constructions, large and small. Last year’s event featured several giant scenes, from the Cologne Cathedral to a medieval castle with a forest, a town, a port, and an invading army outside the gates. This year’s biggest display was a town, Smallville, built by a group of four Portuguese builders including two who I had the opportunity to meet, Fernando Fernandes and Nuno Caravaca. The carnival was a highlight of Smallville. Crouched behind it, in orange, is builder Nuno Caravaca. Smallville’s Police Station is based on the Modular Fire Station.

Most of the town was Caravaca’s creation, from the busy airport to a carnival advertising this year’s Lego Fan Event and its sponsor, the telecom MEO. Many of the buildings there were off-the-shelf Modulars or modifications, such as Caravaca’s Police Station based on the Modular Fire Station. The MOCs, though, were impressive. Some of my favorites were the newspaper office (because I’m interested in anything having to do with the print journalism), the Lisbon Coliseum featuring the premier Portuguese rock band Xutas e Pontapés, Lisbon’s iconic 28 streetcar, the national police headquarters with a show of force (Fernandes’s creation) and the airport tram. 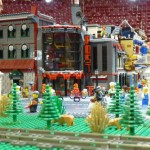 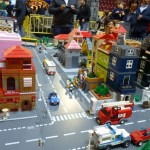 Smaller scenes stood out this year. Within Smallville were a hippie family enjoying a picnic and an “Animal House” party. On a separate table was a typical scene from the Alentejo region, and the creator of the scene peopled it with characters that looked like his neighbors. In the scene, we see a funeral, but the neighbors don’t appear especially sad. There’s a more modest replica of last year’s medieval village. And one scene that I didn’t notice until the last day was a haunted house party, where I suppose the “Animal House” revelers will end up if they don’t clean up their act. 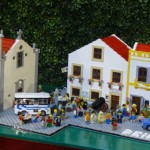 The interplay of castle, church, and trees made this one of the event’s most impressive displays.

Jürgen Bramigk, the German creator of last year’s Cologne Cathedral, brought an impressive model of the Usse Castle in France this year. The giant trees were the first things that caught my eye, among them the weeping willow. I also liked the placement of the church next to the castle, highlighting the alliance between the landowners and the Church during the Middle Ages. For fans of fairy tales and children’s literature, Usse Castle is the inspiration for Charles Perrault’s tale “Sleeping Beauty.” I did not see Sleeping Beauty here, though. 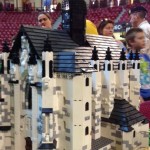 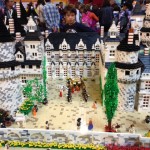 The scene of a typical Portuguese ruin also caught my eye, but I will be talking it in a separate post, to come later this month. Stay tuned…