Standing Up for Freedom of Expression: PEN and Pussy Riot 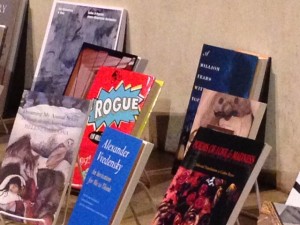 Last week I attended the PEN American Center’s party for new members and longtime members with new books. I caught up with writer friends Kekla Magoon and Laurie Calkhoven, saw Rogue on display, and photographed my friend Josanne LaValley’s outstanding debut novel The Vine Basket on the shelf of new books. Unfortunately, Josanne was ill and could not celebrate this event, and I hope she makes a speedy recovery. The Vine Basket is so awesome that I propose when she’s feeling better and can come to the party next year they will display it for a second year! 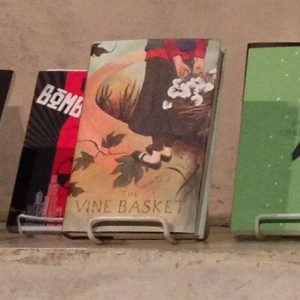 The PEN American Center works hard to make sure writers, artists, and journalists all over the world have the freedom to speak their minds and uncover the truth, no matter how challenging the truth may be to those in power. If pulup got into trouble in Turkey for his LEGO satires of an increasingly cynical and dictatorial leader, PEN would work to free him. In addition to its valuable programs to encourage writing in prisons and in schools and libraries in low-income areas, PEN protects freedom of expression in the United States. It is one of the organizations seeking to protect Net Neutrality in the wake of a Federal court ruling that allows large internet service providers to favor some content and creators over others. With the end of Net Neutrality, ISPs like AT&T, Verizon, and Time Warner can slow down or even shut off websites like this one for any reason and to charge content creators large sums to ensure speedy delivery of their content. Already, Americans pay exorbitant sums for slower broadband service than that enjoyed by the rest of the world, something I noticed for myself when I lived in Portugal. (Looking forward to that fast internet when I return to Lisbon in April!) Now the ISPs also want to charge the content creators, so your top-dollar service may only give you speedy access to some sites but not others. Convinced already? Here’s the petition. And stay tuned for a future commentary on the outsourcing, or privatization, of censorship in the United States. 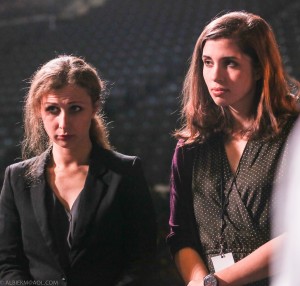 While the First Amendment to the U.S. Constitution guarantees that the government cannot restrict freedom of speech, many people live in countries where the government can do pretty much what it wants. Maria “Masha” Alyokhina, age 25, and Nadezhda “Nadya” Tolokonnikova, age 24, were born at the end of the Communist regime in Russia, at a time of great hope and promise of freedom. No more mass killings, gulags, spying on citizens, or arbitrary laws for ordinary people and impunity for the corrupt elite, people believed. As Vladimir Putin has consolidated his power, that promise has not become reality; yet Masha, Nadya, and the other balaclava-clad members of the feminist punk rock group Pussy Riot seek to hold the new regime to its promises. For singing songs critical of Putin in a church, members of the group were arrested and sentenced to two years in prison.

On Wednesday evening, February 5, Masha and Nadya spoke at an Amnesty International concert at the Barclay Center in Brooklyn, where they talked about their nearly two years in prison — they were released at the end of December, several months early due to international pressure — and the situation in Russia on the eve of the Winter Olympics in Sochi. They urged concert attendees, and those reading and watching their many interviews, to boycott the Olympics because of the Putin government’s disrespect for freedom of expression and persecution of lesbian, gay, bisexual, and transgender persons. They expressed appreciation for the people who worked for their early release and believed that their international visibility will protect them as they continue to work for freedom and human rights in Russia.

I didn’t get to see Masha and Nadya’s presentation at the concert, though my son and his his girlfriend did attend and were impressed. I did see Masha and Nadya on “The Colbert Report” and found them to be funny and engaging as they reaffirmed their commitment to bringing true democracy to their country whatever the cost — and, as founding members of Pussy Riot, to have fun while doing it.