Speaking to the Teachers of Tomorrow at UConn

I returned from two days at the University of Connecticut to see groups of little ghouls and goblins (and princesses and pirates) roaming my Albany neighborhood. The UConn campus was in a state of celebration, between the start of the basketball season, the Red Sox’s victory over the St. Louis Cardinals in the World Series, and Halloween. This cheerful setting definitely contributed to a delightful trip back to an area where I had spent a great deal of time between 2000 and 2009, when Curbstone Press of nearby Willimantic published three of my books. (In fact, my UConn hosts noted the parallels between Willimantic and Storrs and “Willingham” and “College Park” in Rogue.) 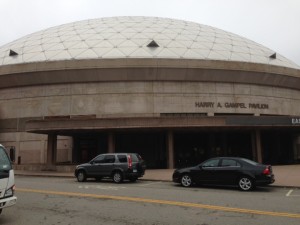 The University of Connecticut is perhaps best known for its championship women’s and men’s basketball teams, which play home games at the Gampel Pavilion. I will remember the warm welcome I received and enthusiastic audiences I met for my three presentations on October 30 and 31. My first talk was to a group of about 20 people at the UConn Co-op. Suzy Staubach, a former Curbstone board member and coordinator of an annual children’s book fair, was busy moving the bookstore to a new location, but she nonetheless did a great job of publicizing the event and getting coverage in the campus newspaper. I was thrilled to see another former Curbstone board member, Lisa Sánchez-González, who played an important role in making sure Gringolandia got published following the sudden passing of Curbstone’s founder and editorial director Alexander “Sandy” Taylor, and who has been a big supporter of Rogue as well. The audience members had lots of great questions following the reading, and the Daily Campus published a wonderful report on the event, which brought tears to my eyes when I read about the student with Asperger’s who found inspiration in my writing and my personal story. 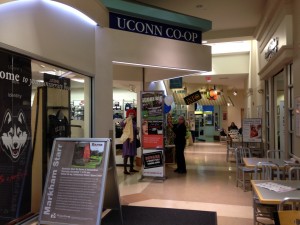 UConn Co-op decked out for Halloween.

After a quick dinner, my host, children’s/YA author Pegi Deitz Shea brought me to her creative writing class, where I spoke about how I develop the plot and subplots. I talked about how Kiara is based on the young teenager I was, and how I’ve always asked myself what would have happened had I fought back when the popular girl pushed my tray from the table after I tried to sit with her group. We examined the two major subplots of the novel — the absence of Kiara’s mother and Kiara’s befriending the boys at the BMX track — and explored the connection between each subplot and the main plot, along with how the subplots, as well as the main plot, have to tie in with the protagonist’s central desire and core belief. I encouraged the students to create a chart, using different colors to help them track the plot and subplots and to see how they intertwine. Afterward, Pegi went through her students’ novel proposals (their final assignment is to write a synopsis and three chapters of a middle grade, young adult, or new adult novel), and I offered comments and suggestions for “mentor texts” to help them as they write. 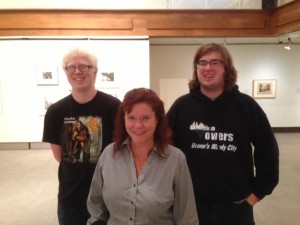 Professor and children’s author Pegi Deitz Shea with students Brendan (left) and Kyle (right) at the Benton Museum on the UConn campus.

On Thursday morning, Pegi and I toured the children’s literature archives at the university library and saw original illustrations by James Marshall and Ed Young. After lunch with English professors Kate Capshaw Smith and Victoria Ford Smith (no relation), I spoke to a classroom of freshmen who are hoping to get into UConn’s prestigious and highly selective Neag School of Education. The class, taught by Jason Courtmanche, heard about my experiences growing up “different” but not really knowing why I had trouble understanding the rules, getting along with the other kids, and making friends. I talked about bullying and the role that teachers can play in helping kids who are targets of bullies or else, may unfortunately encourage the bullying of kids who don’t fit in because of sexual orientation or gender identity, disability, ethnicity, English language proficiency, or socioeconomic class. (Some of these points were ones I made in my blog post “Nonconforming Kids.”) I felt as if it was a valuable and eye-opening experience for these future teachers to hear a classroom experience described from the perspective of a student with a disability/difference who encountered difficulties fitting in and following rules. I hope I also gave the students ideas — for instance through my Lego book launch — for ways to help young people with disabilities/differences express themselves through alternative means and contribute their talents to the classroom and the community.

While it’s important to speak directly to young people in schools, I appreciate the opportunity to speak to college students, many of whom are going to be the teachers of tomorrow. In a few short years, they will be the adults these youngsters see every day in school, the ones who will have the greatest impact on their lives.