Sparks Flew: Letting Your Words and Pictures Show the Story

One of the first things writers learn in workshops and tutorials is “show, don’t tell.” Rather than telling the reader how a character feels, or what the reader should think about the character or situation, the writer creates an image in the reader’s mind and lets the reader draw conclusions.

Creating that image — in other words, “showing,” makes the story come alive. It also shows respect for the intelligence of the reader.

In the process of creating stories using minifigs, I’ve gained a new appreciation for “showing, not telling.” I’ve learned to present the story through the picture. The captions should enhance the story in the picture, and not simply describe the picture.

Let’s see how this works. In this picture, boyfriend Patricio, had to leave for work at the wedding of Karlijn’s cousin, and Karlijn ended up with Giovanni and his shiny new sports car. 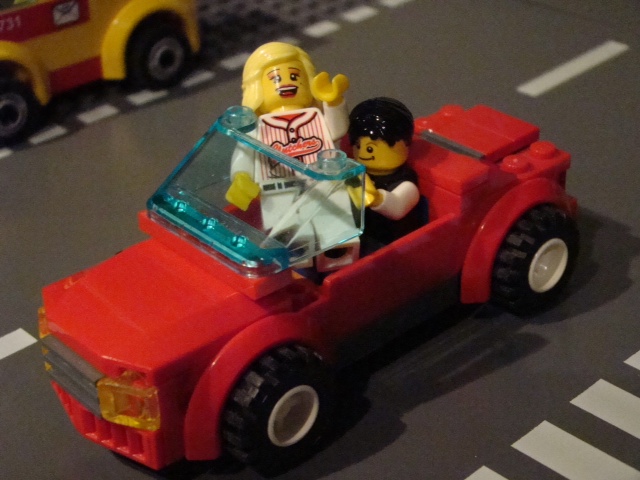 “Whoa, Giovanni! Isn’t this dangerous?”
“No need to get aflutter, my little dove. I have all the cops in my back pocket.”

Karlijn’s position in the car and the minifigs’ expressions show us a lot about her, Giovanni, and the car. In my earlier post, “Minifigs: Character, Personality, and Action,” I describe the characters. That was an example of “telling,” not “showing.” In this caption, I’ve substituted a snippet of dialogue. Like the picture itself, the dialogue “shows.”

What does it show that’s different from the telling of the earlier post?

1. Karlijn dropped her beer mug. Maybe she’s not having so much fun anymore.

2. Maybe she’s scared rather than happy.

4. Giovanni only cares about getting caught, not about the possibility that someone will get hurt because of his actions.

5. Giovanni is a powerful person who uses his power to avoid getting caught.

6. Giovanni uses romantic cliches to hide his lack of authentic feelings for Karlijn.

Dialogue can be an effective means of showing as long as it’s organic to the characters and the story, and not used to convey information directly (particularly information that the characters themselves already know). When characters avoid saying the expected thing, or change the subject, as Giovanni does, it reveals even more.

There are other advantages to showing — using imagery rather than explicit language to portray your story. In many parts of the world, writers lack the freedom to express themselves directly. Even here in the “land of the free,” discretion may be necessary. Among my Instagram followers, for instance, are a number of 12-year-old boys. It may not be a good idea to depict in either words or pictures what Karlijn and Giovanni did when they ran off from the wedding party. What I did instead, was use pictures and words to play with literal and figurative language. 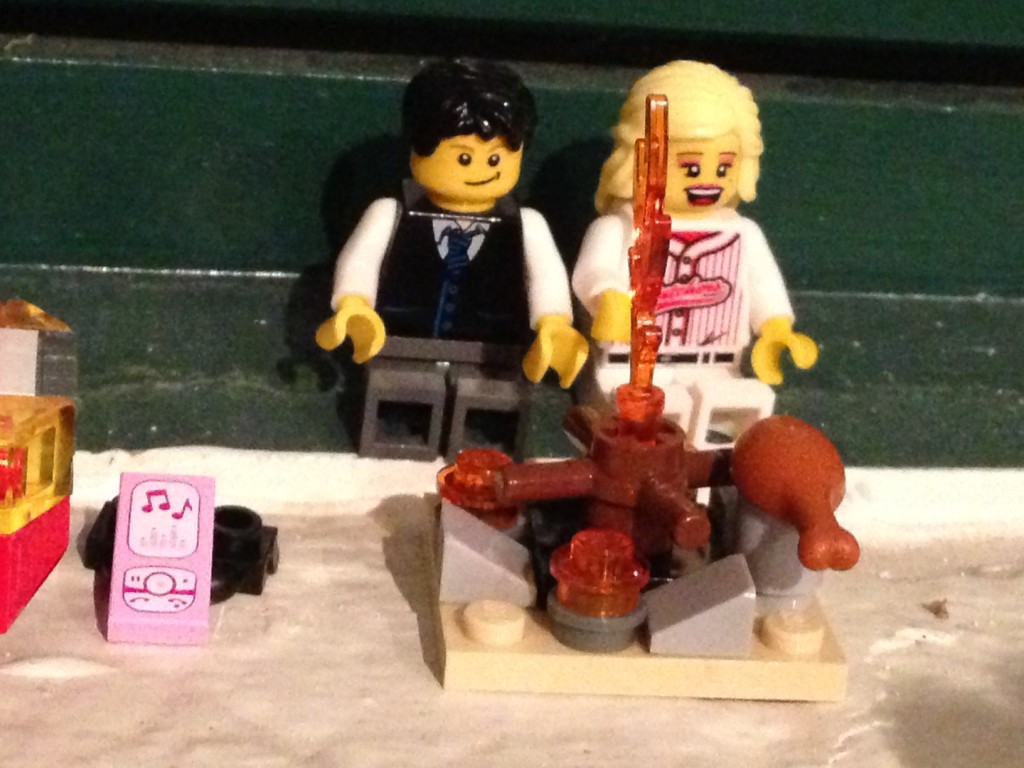 “Sparks flew” is a figure of speech indicating romantic attraction. In the picture, though, I portray its literal meaning (or for my young fans, its safe meaning) as the two sit by the fire. I let viewers imagine what they’re doing by the fire — cooking dinner, enjoying s’mores, telling stories, keeping warm.

Note their cellphones. This kind of imagery is designed to sneak past censors to reveal a hidden and deeper, often prohibited meaning. People who live in repressive societies learn to recognize these symbols that show things unable to be told directly. In my case, I’ve done so to keep my work appropriate for a younger audience. Writers for children do this all the time — include within the simple story more sophisticated or edgy asides to entertain adults who read the book to their kids over and over.

Showing, not telling makes for more vivid and engaging stories, but in my experience, it’s important for other reasons as well. It respects the intelligence of the reader, and it challenges readers to look beyond the words, to create images in their minds, and to think about all the dimensions, literal and figurative, of the story. Showing builds our capacity for imagination, including the imagination we may one day need to triumph over censors and dictators.