Yesterday, August 31, 2020 marked the 40th anniversary of the signing of the Gdańsk Agreements, which allowed Solidarity to become the first independent trade union in Communist Poland. The moment of triumph came after ten years of organizing under a totalitarian regime that broke two previous strikes by shooting strikers and imprisoning their leaders — most notably Lech Wałesa, who was fired and blacklisted from all future employment. The government could do this because it basically controlled all employment. For years Wałesa and his growing family lived on the margins of society, supported by church charity and odd jobs for which he was paid in secret. The strike that led to the historic Gdańsk Agreements began earlier in August, when Wałesa’s colleague at the Lenin Shipyard and co-organizer, Anna Walentynowicz, was also fired and blacklisted, months before her planned retirement which also meant she would not receive her pension. 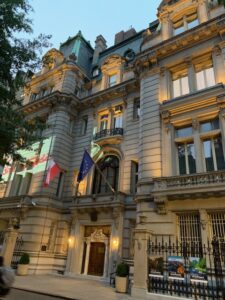 The Polish Consulate in New York City has a familiar look.

Although 10 million people throughout Poland joined Solidarity in 1980 and 1981, its immediate success was short-lived. Government forces backed by Soviet tanks cracked down in December 1981. The regime imposed martial law and jailed the union’s leaders. At the end of Andrzej Wajda’s classic film set in Gdańsk during the strike, Men of Iron, a government agent tells the main character, a journalist, that the agreement is nothing more than a piece of paper, torn up at the whim of those in power.

But people never forgot their initial victory and the possibilities it opened up for Poland and the rest of Eastern Europe under the thumb of the Soviet Empire. In the same year that the Berlin Wall fell, the Velvet Revolution swept through Czechoslovakia, and Nicolae Ceausescu’s murderous rule in Romania came to an end, growing support for Solidarity as a semi-clandestine movement in churches, schools, and workplaces (and a new wave of strikes) led to a June election that Solidarity won despite the government holding all the advantages in that vote. Solidarity’s victory was, in fact, the first for peaceful democratic forces in the region. 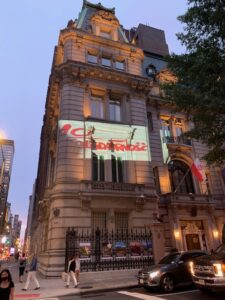 As was the case with the Carnation Revolution in Portugal in 1974, the 40th anniversary of the August strikes and the Gdańsk Agreements that gave birth to Solidarity may well be the last major anniversary in which the principal figures are still alive. Anna Walentynowicz is no longer with us, having died in a plane crash that also killed Poland’s president, Lech Kaczyński, himself a Solidarity organizer as a university student in Gdańsk. To honor this event, the Polish consulate in New York City invited local residents to a light show yesterday evening to commemorate the anniversary. Braving the mosquitoes and Covid-19, I went and saw dozens of others gathered to take photos and talk about that time. Most of the attendees came from the city’s large Polish community, and almost all of them spoke Polish. Several dressed in the red and white colors of the Polish flag. Technical difficulties delayed the lights, and there were no speeches, but I took pictures of the show and of the consulate building that is wonderfully evocative of east central European architecture. 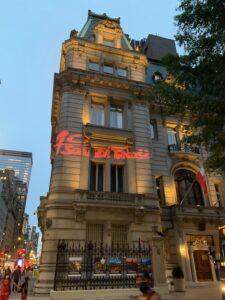 The story of Solidarity and the people involved in so many aspects of its organization over the years has a lot to teach us today. Since the 1980s, the union movement in the United States has suffered defeat after defeat. The consequences of that defeat cannot be underestimated. Economists have pointed to the decline in unions as a principal cause of accelerating inequality, as executive salaries now outpace workers by a factor in the hundreds. Workers toil under increasingly dangerous conditions because they don’t have strong enough forces to defend them. What doesn’t get mention are the social consequences of broken unions, workers and communities losing a key source of cohesion, camaraderie, and mutual education. Rather than working together, everyone is seen as competing against each other for scarce resources. No wonder we’re pointing guns at each other, at each other’s throats. Fear, suspicion, and atomization — each person for themself — leads to violence, to seeing people not in the immediate circle as the Other, to the following of a charismatic leader demanding a false unity based on unquestioning obedience. 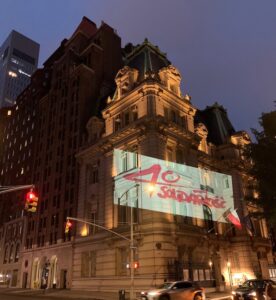 My forthcoming middle grade novel MOONWALKING portrays the effect of a union’s destruction on a family living in Brooklyn in 1982. My protagonist, JJ Pankowski, is of Polish heritage — his grandparents fled Communism with his father nearly 30 years earlier — and he can’t understand how President Reagan can support Solidarity while crushing his father’s union, PATCO, and firing and blacklisting its members. Many historians now see the defeat of PATCO as the turning point when workers began to lose their power and their rights.

Solidarity emerged in conditions far harsher than the ones we face today, ones in which an all-powerful State could determine each individual’s life or death. We may not be as far from that situation as we think. The U.S. Constitution may have a longer history than the Gdańsk Agreements, but it, too, is still a piece of paper unless the collective will exists to enforce it. Let us take inspiration from the heroes of Solidarity in pursuing their cause and never giving up.