My experience with social media began when I signed up for Facebook the year before Gringolandia came out. I was fortunate at the time to have some friends and colleagues from MultiCultural Review who “friended” me immediately and help me get acquainted with the site, so that it became a huge advantage when I found myself having to handle a large chunk of the promotion for that novel.

When I entered the MFA program at Vermont College, Facebook became an important way for me to keep in touch with my classmates, friends in other classes, and faculty members during those long months between residencies when we  were scattered throughout the world and dealing with our various writing/confidence crises. We have continued to keep in touch through a private class group and the group for our VCFA program. Facebook has also been a great way for me to post my Lego creations and get feedback from people.

In March, my editor at Penguin signed me up for Twitter. I haven’t found Twitter as friendly as Facebook–to this former social outcast, it seems more like a high school cafeteria, where certain people are fawned over, and people like me get talked over and ignored. When I’ve joined discussions, none of my comments has garnered a response of any kind. However, I have managed to make connections through people I know at VCFA, and they’ve put me in touch with reviewers who’ve read and loved Rogue such as the lovely Melissa Mantovani @YABookShelf in Canada and the equally lovely Crystal Brunelle @RichinColor in Wisconsin.

I don’t think my editor will be thrilled to know that my current obsession has become Instagram. She can blame my kids, who said all the young people today are signing onto Instagram and people will love my Lego photos. (I definitely have my Lego fans on Facebook, but the Twitter people have not appreciated the pictures. At. All.) So I started by uploading this aerial view of the main part of Little Brick Township. 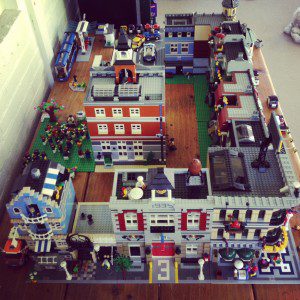 My son reposted this image on his feed, and so far, he said, he’s gotten around 40 likes, which is about four times as many as he’s gotten for any of his other pictures. I’ve gotten even more, and hit 100 followers in 5 weeks on the site.

Since then, I posted various pictures of my all-female band Mumfield & Daughters, including one of a Mumfield daughter working her day job as a town clerk processing marriage licenses. 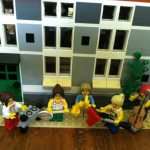 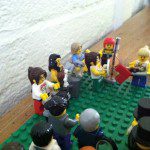 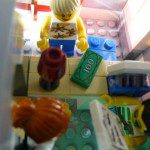 Life is tough for us artistic types. In fact, I’m looking for a day job myself — that is, if I can pry myself loose from viewing the new Insta-videos and file my application.