Categories Menu
Home » Blog » Should You Rent a Car in Portugal?

Should You Rent a Car in Portugal?

From time to time people write me with questions about their upcoming trips to Portugal. A common question that I get is, “Should I rent a car?” 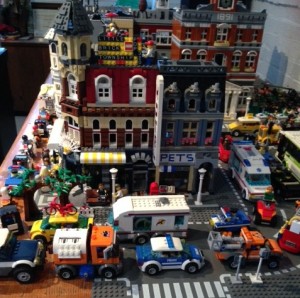 Several years ago I suggested a friend rent a car to travel to Évora, a town in the Alentejo region known for its Roman ruins and medieval palaces and churches. Last year, when we went there ourselves, we had no problem using public transportation. We saw the countryside from the window of our comfortable air-conditioned bus, and the town itself was quite walkable. We have traveled to a number of other cities and towns in Portugal via public transportation, including Sintra, Cascais, Óbidos (which is a bit of a pain because there is a bus transfer in Caldas das Rainhas (route to Leiria) and then a cab ride to the medieval castle that’s the town’s attraction), Tomar, Coimbra, Aveiro, and Porto. We know we can take short bus or train trips to other spots we have yet to visit — Nazaré on the Atlantic Coast (a popular surfing destination but also one known for the devoutly Catholic widows dressed in black), Setúbal, a city south of the Tejo about an hour from Lisbon, and Guimarães, a city east of Porto that served as the country’s capital in the early Middle Ages.

Richard and I don’t like to drive, and we’re willing to put up with the inconveniences of public transportation — being tied to a schedule, possible delays (mass transportation generally runs on time, unless there’s a strike or other rare circumstance), taking taxis from station to hotel or city center (relatively inexpensive in Portugal) , buying tickets (speaking Portuguese helps, though English is widely spoken throughout the country), and limited access to the countryside. Having Portuguese friends with cars means we’ve seen rural villages, though we’re pretty much city people anyway. But if you want to explore rural areas or the wine country on your own, without having to sign onto a tour, renting a car is a good idea. The same if you want to travel to the Algarve, the country’s principal resort area. 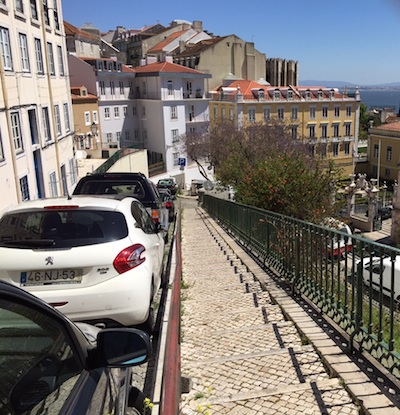 The Lisbon neighborhood of Mouraria has become popular with visitors. But do you want to drive in this?

On the other hand, if you plan to spend all your time in Lisbon and/or Porto, I suggest you not rent a car. Parking is nearly impossible, streets (especially in Lisbon but also in older sections of Porto) are narrow, winding, poorly marked, and usually one way. They love traffic circles — do you? In Lisbon especially, a street will dead end, and the only way to get to the intersection marked on your map is via a staircase. And, no, cars are not allowed to go up and down staircases. Taxi drivers frequently get lost in their own city, which is not your city. Older sections of these (and other Portuguese cities) were not laid out by professional planners but by livestock centuries ago. If you’ve ever driven through Boston, you know what I mean. I know several travelers who needlessly complicated their vacation by renting a car in Lisbon.

On the other hand, public transportation in both Lisbon and Porto is excellent, and both cities are pedestrian-friendly compared with others throughout Europe (looking at you, Dublin!). If you get lost, there are plenty of friendly, English-speaking people to offer directions. The Lisbon metro runs more frequently than any similar metro or subway in the U.S., and the stations and trains are great places to find out about fun events for both locals and visitors. Since my insanely-popular feature, “Trendsetter and Hipster’s Guide to Enjoying Lisbon,” touchscreen kiosks have been installed in many metro stations to help you find concerts, museum exhibits, festivals, and more. In Lisbon, the 28 streetcar passes through many of the major tourist destinations, from the São Bento Palace that houses the Assembly of the Republic to the historic Alfama neighborhood. The only Lisbon destination where you may wish you had a car is the LX Factory, because the many bus lines that run there aren’t the most reliable. But, parking in that neighborhood is pretty close to impossible so you have a choice — wait for the bus, spend an equal amount of time cruising around for parking, or spring for a taxi. (We waited for the bus and took the first one that came to whatever metro station it dropped us off.)

If you do decide to rent a car in Portugal, here are some additional tips, beyond the usual for renting cars in any country:

Feel free to contact me if you have additional questions, particularly about navigating public transportation. I’m a big fan of buses and trains, for worry-free travel and as a way of meeting people and getting to know the country in a way that most tourists do not.

P.S. (added 1/19): For more specific information about locations of car rental offices in Lisbon and the Algarve, check out this post.