Categories Menu
Home » Blog » “Should I Stay or Should I Go?”

“Should I Stay or Should I Go?” 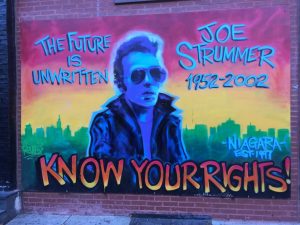 The iconic Joe Strummer mural in the East Village across the street from Tompkins Square Park.

Back in the 1980s I became a fan of The Clash, the pioneering British punk-rock band with songs of trenchant political and social commentary. And since 11/9/2016, a day I see as bookending a period in my city beginning on 9/11/2001, a Clash song has been playing in my head, “Should I Stay or Should I Go?”

I begin by acknowledging the privilege of this question, the fact that I can go. Because Adolf Hitler stripped the German citizenship of both my husband’s parents, he applied in 2008 for its restoration and now has dual citizenship and two passports. Both of our children also have dual U.S.-German citizenship. While I do not — my ancestors came to the United States decades earlier, by choice, from Austria, Poland, Russia, and Lithuania — I have the right of residency anywhere in the EU through marriage to a German citizen. I am fluent in two European languages, Portuguese and Spanish, and can also read and understand French and Italian. My children are college-educated, and although they inherited my husband’s language skills rather than mine, they are accustomed to living abroad and have friends in many countries.

If the presidency of Donald Trump, along with GOP control of the legislative and judiciary branches, leads to a wave of repression and/or an outbreak of paramilitary violence, we can leave. We will be safe. 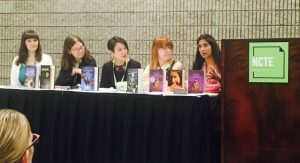 But would we want to? Last Friday, I spoke as part of a panel at the NCTE (National Council of Teachers of English) conference in Atlanta on diversity and historical fiction. The first question for the panelists — Mackenzi Lee, Stacey Lee, Tara Sim, Padma Venkatraman, and me — was “Are there connections between your work and specific contemporary issues that you’d like teachers and librarians to raise during book discussions? Or any personal links you have to your work?”

I spoke about Gringolandia. The novel portrays a 17-year-old living with his mother and younger sister in exile in the United States while his journalist father remains in Chile, a political prisoner under the Pinochet dictatorship. About a third of the novel takes place in Chile and shows what life is like in a police state, what people have to do to survive and the consequences of dissent, of standing up for free speech and human rights. While the people face many dangers, acts of resistance also bring dignity and pride, as in a scene where my protagonist, Daniel, helps set up an impromptu concert for a folk-music duo after police shut down their original venue. (This scene was based on the real folk-music duo Schwenke & Nilo that did precisely that, many times, in the 1980s.)

Life in exile poses different challenges. With safety come cultural dislocations, worry about family and friends back home, and the difficulty of learning a new language. Daniel’s younger sister, Tina, has a hard time with change and with fitting in. Their mother feels powerless to help her husband or to influence events in the country where she has lived almost her entire life. Daniel struggles with English at first, and with the social isolation of not being able to communicate. His father’s arrival in the United States, a changed man as a result of almost six years of imprisonment and torture, presents Daniel with a terrible choice: continue along the path of assimilation (Daniel has already begun the process of becoming a U.S. citizen), or try for a relationship with a father who only wants to return to Chile to continue the freedom struggle.

Gringolandia is a seven-year-old novel that suddenly has become relevant again. It shows what life is like in a place without freedom and the tough choices that people have to make — to knuckle under and follow the rules (including potentially denouncing neighbors, friends, and family), to resist in spite of the dangers, or to flee into exile. When I wrote it, I never thought it would happen here, although my friends in Chile had warned me: a country that would impose a brutal dictatorship on people of other lands would one day do the same to its “enemies” at home. I originally wrote the novel in the 1980s as a contemporary, shelved it in 1990 following a series of miscommunications with an editor who showed interest and failing to find another publisher, and took it out again after the revelations of U.S. torture in Iraq, Afghanistan, and Guantanamo. Back in 2006 I wanted to show how torture affected not only prisoners but also their families and communities. Today, it is a story about surviving despotism and making choices when all the choices are bad ones.

I do not know what my own choice will be after January 20. It will likely depend on others in my family and the challenges and prospects they face. However, because of the fact that I’ve lived in Europe and have access to European immigration lawyers, I was asked to speak at a skill share on emigration earlier this month. Those in attendance were young LGBTQ people who feared persecution but also did not want their jobs, relationships, and future plans upended. Even a German-English translator with great job prospects in Europe was reluctant to leave because she was hoping to find a partner, get married, and start a family. Even though she had reason to fear that her same-sex marriage would be deemed illegal at some point, and her plans to adopt a child constrained, she still hoped for the best and planned to work to make sure the worst would not come to pass.