My husband and I had dinner with our son, Derrick, and his girlfriend, Lindsey, and on the way to Russ & Daughters’ highly recommended new cafe, Derrick and Lindsey discussed their New Year’s resolutions. I believe Derrick’s return to the gym was involved; surveys call this the most popular New Year’s resolution in the United States. Their conversation made me think of my blog post last year, where I resolved to look for an hourly job at a place like Starbucks or the Apple Store that would bring in income while not sapping the creative energy I needed to write and pursue other ways of telling stories, including my Lego photography and this blog. 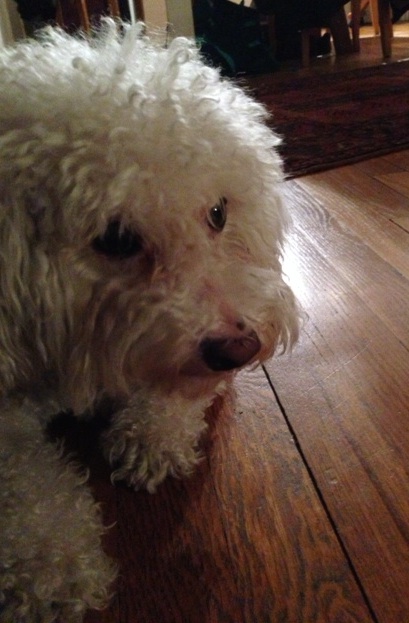 Stop giving me that reproachful look, Charlie! Did you go without dog food because I didn’t send out my resume?

As it turned out, I never submitted a single resume for an hourly position all year long — a spectacular display of New Year’s resolution fail. I have therefore decided to propose an equivalent resolution fail this year. My resolution for 2015 is to win the lottery, which I will achieve by not buying a single lottery ticket.

I have only bought one lottery ticket in my life. When I was visiting my mother in Houston some 20 years ago, the Texas lottery had a record jackpot, and everyone was getting into the hype. My mother, who never buys lottery tickets, bought one, and after she did, so did I. Neither of us won. We didn’t even come close. So I tried the lottery once, didn’t win anything, and never tried again.

So why did I make so little effort to follow through on last year’s resolution? A lot had to do with the direction my writing career took in 2014. Shortly after New Year’s, I attended a PEN meeting, where Claudia Bedrick of Enchanted Lion Books spoke about publishing translated picture books. She mentioned that she needed a translator for a picture book in Portuguese, and soon afterward I was busy working on the English edition of Isabel Minhós Martins and Bernardo Carvalho’s O Mundo Num Segundo. It turns out that there’s a fair amount of demand for translators from Portuguese to English, and in the next few months I’m going to be working with one of the faculty members at Vermont College of Fine Arts to develop further my credentials as a translator.

Two months later, in March 2014 I sold the companion to Gringolandia, Surviving Santiago to Lisa Cheng at Running Press Kids. I had a fair amount of revision, including the removal of a second point of view, and a very tight schedule. Work on this novel, due out in June 2015, kept me quite busy through most of the year. The sale of Surviving Santiago was a truly wonderful surprise, especially since the manuscript had been sitting in a trunk for three years because my agent and I felt my contemporary realistic fiction — first Rogue and then ANTS GO MARCHING — would be easier to sell. However, ANTS remains unsold, and my next project will most likely be another historical novel.

Finally, because I was stuck for my next project, I decided to get unstuck by volunteering to be a first-round panelist for the Cybils Awards in the Young Adult Fiction category. From October to the end of December I read 128 novels, with an eye to figuring out what worked or didn’t work in each of them, what gave them literary merit and popular appeal. Last week my panel had a three-hour Google chat to select the five to seven finalists to go to the next round and to assign panelists to annotate each of the finalists. We ended up choosing five, and all but one of us wrote annotations. I am the proud annotator of Isabel Quintero’s Gabi, a Girl in Pieces, which I’d have to say was one of my favorite books of the year and one I reviewed already for The Pirate Tree. (Next month The Pirate Tree will feature my interview with the author.) Besides choosing five awesome books — not only Gabi, a Girl in Pieces but also Brandy Colbert’s Pointe, Gail Giles’s Girls Like Us, Jandy Nelson’s I’ll Give You the Sun, and Jason Reynolds’s When I Was the Greatest — I’ve also managed to come up with some solid ideas for my next book. And as a supporter of #WeNeedDiverseBooks, I’m also thrilled that of the five books we selected, four of them feature diverse main characters and three are written by authors of color.

So, no, I didn’t get my hourly job, but I had a productive year and am looking forward to an equally productive 2015 whether or not I win the lottery.