Return to Portugal: Not a Garret…But a Great Location Anyway

As a dedicated watcher of House Hunters International, I’ve learned the three clichés of the expat house hunter: “fell in love,” “wanted the slower lifestyle,” and “wanted to give our kids the international experience.” 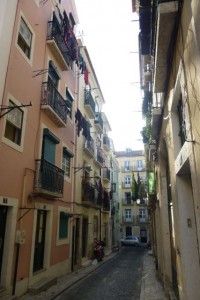 Our new street in Lisbon.

Okay, I’m cliché #1, and arriving in Lisbon last week, I picked up the love affair exactly where I left off in December 2012. (See “The Place Where I Fell in Love” for more on this long-term romance.) Unfortunately, the lovely garret where Richard and I stayed near Principe Real was no longer available, though the person who rented it to us connected us to a French professor and translator who had a first floor apartment (first floor being the same thing as second floor in the United States) for rent. This one was in the nearby neighborhood of Santa Catarina, known for its convenient location and overlook of the Rio Tejo (Tagus River) and hillside houses on the way to the Ponte 25 de Abril (April 25 Bridge, originally built during the notorious Salazar dictatorship and renamed to commemorate the date of that regime’s downfall). A pleasant place to sit during the day (and where I am now blogging despite a few drops of rain), at night, the Miradouro de Santa Catarina becomes a major party spot, a place where locals and tourists of all ages gather, dine, and make plans for the rest of the night. 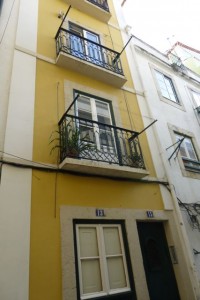 Our building. We’re on the first floor (above the ground floor).

Our friend Luis Capucha met us at the apartment the day after our arrival. He knows this neighborhood well, having attended secondary school about a block away. I asked him about the statue that looks out over the river, of a hideous-looking man with the name Adamastor. The first time I saw him, pigeons were pecking at his eyes. I whipped out my iPhone and got the great banner photo you see above.

Luis explained the story of the Adamastor. During the age of Portuguese exploration, he was a monster that sailors believed inhabited the southern tip of Africa, now known as the Cape of Good Hope. Every time a ship passed, the cruel Adamastor would push it under the water and rejoice in the sailors’ watery deaths. Sailors thus feared to go there. 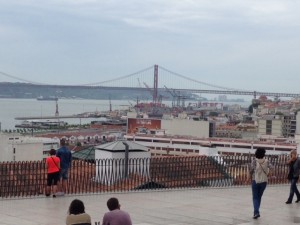 View of the Rio Tejo from the Miradouro Santa Caterina.

The plaque on the Adamastor statue mentions Luis de Camões. Camões was Portugal’s first national poet, the man who in the fifteenth century penned the Lusiadas, tales of brilliant and heroic Portuguese sailors who ventured into the unknown, braved storms and sea monsters, and mapped the sea routes that would become essential for international voyages, trade, and unfortunately conquest. In the Lusiadas, Camões tells the tale of how the brave Portuguese sailor, represented by the tiny man in the statue, conquered the Adamastor, telling him that his faith in God and his loyalty to the king was greater than his fear. In this way, the giant sea monster turned harmless, its eyes buzzard food and its hideous visage the stuff of legend. 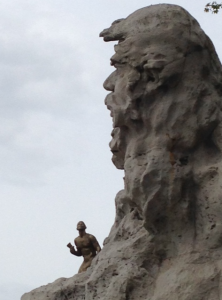 Today, the tale of the Adamastor’s defeat encourages children to try things that they’ve never done before. I can’t say that Portuguese children are more adventurous than children elsewhere in the world, but as national populations go, the Portuguese are unusually welcoming, curious about the world, and willing to go anywhere if necessary to improve their and their families’ lives, a factor that over the years has contributed to the country’s high rate of emigration.

For someone from another country who struggles in social situations, I appreciate the openness of my Portuguese hosts. It has certainly motivated me to learn more about their history and lives in the present day, as well as to let people know what a great place this is to visit. As the westernmost city and the continent’s oldest city, Lisbon is considered the gateway to Europe, but more than that, it’s a special place in Europe where a visitor can find it easy to feel at home. 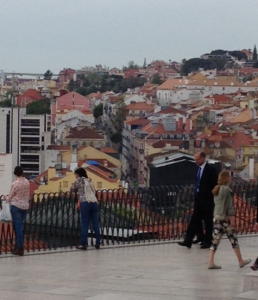 A view of hillside homes all the way to the 25 de Abril bridge.

Over the next few weeks I’ll be blogging from Lisbon, with features on various special events that include Holy Week, the 40th anniversary of the revolution that brought down the dictatorship, and a LEGO exhibition at the end of the month that features the work of builder extraordinaire Pedro Nascimento. If you have any questions about traveling to Portugal, please comment and I will do my best to answer, or find someone who can answer.