Patricio Has Writer’s Block, But I Don’t: My Writing Process Blog Tour

My friend Kerri Majors from YARN, the Young Adult Review Network tagged me a couple of weeks ago for the My Writing Process Blog Tour. Thank you, Kerri! In her fun and informative post, she talked about her YA fiction in progress and her nonfiction writing, including her recently published This Is Not a Writing Manual: Notes for the Young Writer in the Real World. This Is Not a Writing Manual draws from Kerri’s work with the teen and adult writers who are YARN alumni, myself included. Last year I wrote a piece about characters with disabilities, and I’m working on one now about how my work with LEGO has influenced my writing.

As part of the tour, I answer four questions about my writing process and then tag two more writers who will be up next Monday.

What are you working on? 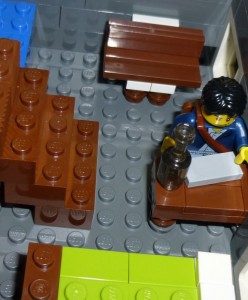 Patricio, our Pubrickster Prize-winning investigative journalist, dreams of being a poet. He sits at the desk in his basement room, but his laptop remains shut because the words won’t come.

I’m always working on something, and often more than one thing at a time. I just found a wonderful home for the YA novel that I started in 2007 as a companion to Gringolandia, SURVIVING SANTIAGO. For the next two months, I will be busy revising SURVIVING SANTIAGO, and I’m looking forward to this process. In general, I love revision because it gives me the opportunity to shape the story and take it in directions I never thought possible when I wrote the first draft. The sense of revelation and of wonder is just as strong in later drafts as in the first. Furthermore, I really like the idea of revising a personal history, because it’s not something I get to do in real life. In fiction I get the chance to fix mistakes and find better ways of saying things.

I’m also creating a graphic novel (actually, more of an interrelated collection of stories) using LEGO minifigures and a town I built, and posting the frames on Instagram. I have an ensemble cast, most of them twentysomethings trying to find their place in the world despite high unemployment and an official culture of corruption that shuts most of them out. Patricio, who’s featured here, is one of the few with a job — he’s a reporter for the town’s alternative newspaper — but some powerful foes are gunning for him if his personal demons don’t take him down first. 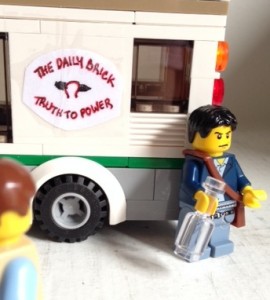 “Why does that drunk and troublemaker get the good stories while I have to cover birthday cake contests?”

Working on the graphic novel has helped me to visualize my scenes and make them concrete for readers, as well as to use an economy of words, especially in dialogue. While Instagram, unlike Twitter, allows unlimited captioning, nobody reads more than two or three lines unless there’s a giveaway involved. So along with the pictures, I’ve learned to let the least amount of words possible tell the story.

How does your work differ from others of its genre?

Gringolandia was an unusual young adult novel, the story of a refugee teen from Chile who must come to terms with his father’s imprisonment and torture as a political prisoner under the Pinochet dictatorship. There aren’t a lot of novels for teens out there about torture and its long-term impact on the individual and his or her family. SURVIVING SANTIAGO deals with many of the same themes, as Daniel’s younger sister, Tina, travels to Chile after more than eight years away to spend two months with her estranged father and unmarried aunt whose secret Tina is now old enough to know and understand. As far as I know, this is going to be one of the few realistic historical novels that depicts the experiences of lesbians and gays in a conservative developing country, but one undergoing rapid social and political change at the time of transition from dictatorship to democracy.

I’ve also written a contemporary realistic YA novel that explores class divisions and the challenges an academically gifted teenager from a poor family faces when he tries to beat the odds against him. It’s a twist on the “star athlete suffers career-ending injury” story, as my protagonist suffers a concussion after an attack by classmates who he has publicly humiliated.

In all my writing, I’m very aware of power, how those who have it often abuse it, and how those who don’t have it fight back. This would make my writing a natural for the dystopian genre, but I tend to be literal, which means I prefer to explore dystopias that have existed in the past or that exist today. I think there’s a place for that because it can be easy to dismiss futuristic dystopias as pure speculation — “never going to happen” — however much they’re based on societies yesterday and today. 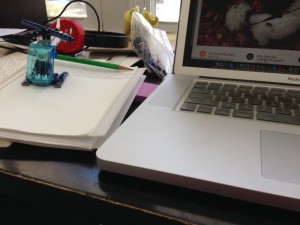 Perhaps the question should be, “Why is your desk such a mess?” or “How can you find anything?”

Why do you write what you do?

I was relentlessly bullied as a teenager, so I know what it feels like to be preyed on and powerless. It took a long time for me to fight back and to find my “pack” of other misfits. Writing has also given me a way to fight back, if only in my imagination. For example, when I was in seventh grade, I thought that I would become popular by sitting at the popular girls’ table at lunch. When one of the popular girls pushed my tray from the table onto the floor, I stood there crying while everyone laughed at me. In my novel Rogue, I changed that story to my character, Kiara, picking the tray from the floor and slamming it into the girl’s face. While Kiara gets suspended from school for the rest of the year, her fighting back has given her a bit of dignity and respect.

How does your writing process work?

I tend to do a lot of outlining and pre-writing before I start in on a project. I especially like writing scenes from different characters’ points of view. Because I generally have a lot of material going into a project, it doesn’t take long for me to finish a first draft, but my draft tends to be sketchy and incomplete. Even though I always have an ending in mind, I usually end up hating my ending by the time I finish the first draft, and part of the fun of revision is looking at all the “what ifs” raised by the rest of my story. Both Gringolandia and SURVIVING SANTIAGO ended up with endings that were complete opposites from the original.

A lot of people tend to write long and have to cut in the revision process. My novels grow in length, complexity, and depth as I revise.

And now for the next folks on the tour… Drum roll, please. 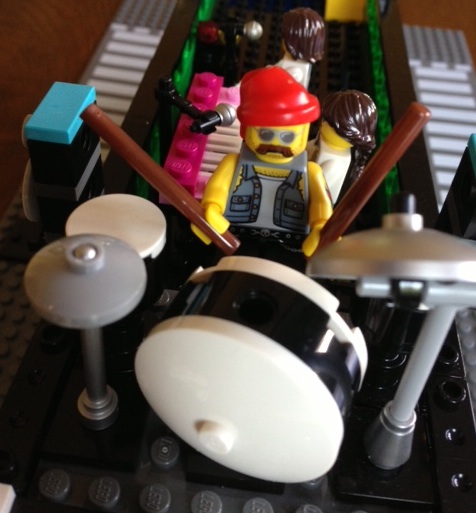 Maria E. Andreu, author of the brand-new and amazing YA novel The Secret Side of Empty, based on her experiences of growing up as an undocumented immigrant.

Meghan Nuttall Sayres, author of the YA historical novels Anahita’s Woven Riddle and Night Letter, both set in nineteenth century Iran, and the editor of the anthology Love and Pomegranates, which includes the poetry, essays, and art of Iranians and those around the world who have visited and/or written about Iran.

Both Maria and Meghan are involved in PEN, an organization that promotes writing and freedom of expression around the world, and Meghan is a regular contributor to the PEN American Center blog. You may read one of her posts here.

My fellow Blog Tour tagee is agent and YA novelist John Cusick.